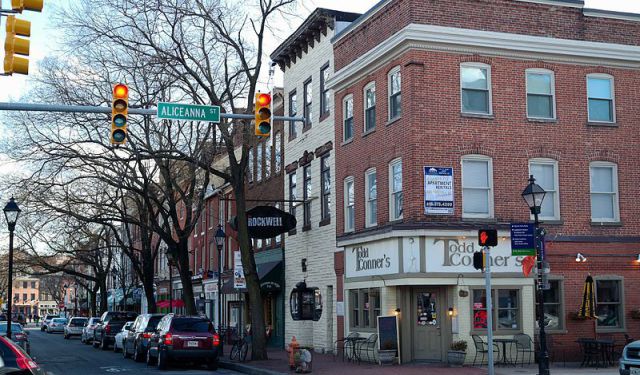 Go on a shopping spree and enjoy fantastic views at the same time when you browse the stores at Fell’s Point. This historic neighborhood sits on the Baltimore waterfront and is filled with colorful old buildings that date back to the 18th and 19th centuries. Fell's Point was named after an Englishman who founded a ship-building company here in the early part of the 18th century. The area was formerly a shipyard and much of the neighborhood's appearance has remained unchanged over the centuries. Many of the 18th and 19th-century homes and storefronts used to be either a boarding house, a bar or a brothel.

Wander in and out of the shops and boutiques to purchase clothes, souvenirs, household items and handcrafted goods. As you stroll through the attractive locale, relish the historical architecture and nautical atmosphere. When it comes to finding something to eat, there is a good choice of eateries here, including cafés, pubs and upscale restaurants. Sample some of the local freshly caught seafood and oysters while taking in beautiful views across the water. If you don’t want the evening to end after your meal, pop into a pub where you may be able to catch some live music performances.
Image Courtesy of Wikimedia and Smash the Iron Cage.
How it works: A discovery walk features a route using which you can explore a popular city neighborhood on your own. This walk, along with other self-guided walks in over 1,000 cities, can be found on the app "GPSmyCity: Walks in 1K+ Cities" which can be downloaded from iTunes App Store or Google Play to your mobile phone or tablet. The app's built-in GPS navigation functions allow following this walk route with ease. The app works both online and offline, so no data plan is needed when traveling abroad.