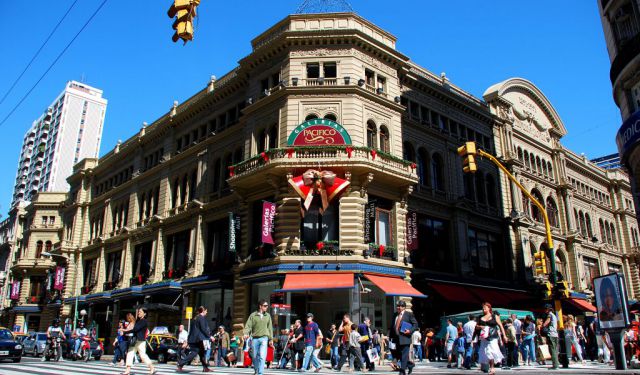 Image by Silvinarossello on Wikimedia under Creative Commons License.

Florida Street drips elegance and sophistication from many of its stores. Catering for those who like some of the finer things in life, this downtown pedestrianized locale is one of THE places to come in the city for leather goods. Many locals and tourists also flock here to buy sports equipment. And if you’re in the market for some last minute souvenirs, search through stores selling such traditional and beloved items as football jerseys, tango figurines and shot glasses.

One of the biggest draws is the internationally famous Galerias Pacifico. This upmarket shopping mall is home to more than 150 stores, including such leading global brands as Lancôme, Lacoste, Nike and Christian Lacroix. The mall is housed in a lavish building, which features a 450m2 central dome covered in murals.

While you are in the area, make your way over to Avenida Corrientes. This is one of the most famous and popular thoroughfares in the city and encompasses cinemas, the city’s theater district and numerous bookstores, many of which are open late into the night. Tango legend Carlos Gardel lived here and there are commemorative plaques on street corners dedicated to key figures in the development of the genre. As you walk along the street, admire the exhilarating mix of architectural styles, which includes gleaming skyscrapers and Art Deco buildings.
How it works: A discovery walk features a route using which you can explore a popular city neighborhood on your own. This walk, along with other self-guided walks in over 1,000 cities, can be found on the app "GPSmyCity: Walks in 1K+ Cities" which can be downloaded from iTunes App Store or Google Play to your mobile phone or tablet. The app's built-in GPS navigation functions allow following this walk route with ease. The app works both online and offline, so no data plan is needed when traveling abroad.