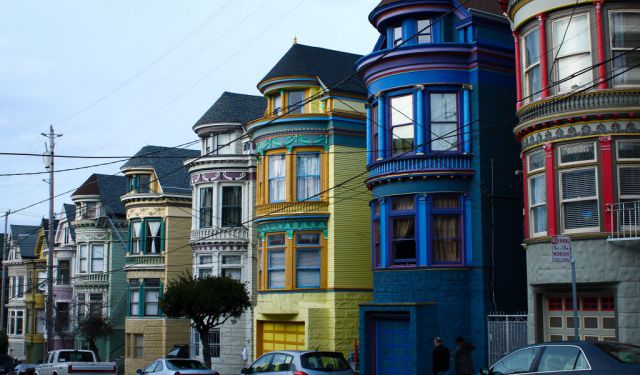 Image by Porsche Brosseau on Flickr under Creative Commons License.

Haight Ashbury came to global attention during the late 1960s as the epicenter of the hippie movement, a magnet for the tie-dye, flower children and the home of such famous musicians as Janis Joplin and the Grateful Dead. Today, it is still very much a bohemian enclave with a cool carefree vibe.
You will see it in the locals, in the vintage stores, book shops and hippie-themed outlets. Although the legacy of the hippie counterculture movement is in evidence, the area is not trapped in some kind of time bubble. It has moved on, following a period of gentrification.

Enjoy a leisurely stroll through the neighborhood, admiring the colorful Victorian and Edwardian homes, browsing the eclectic mix of stores and stopping for a spot of lunch in an organic café or restaurant or in one of the bars that dot the area. There is a good selection of eating options in the neighborhood, including Thai, Chinese, Mexican and Indian.

Nearby is the beautiful Buena Vista Park, from which you can take in excellent views of San Francisco's Golden Gate Bridge. Part tourist attraction, part residential area and part modern shopping area, let vibrant and colorful Haight Ashbury seduce you with its many and varied charms.
How it works: A discovery walk features a route using which you can explore a popular city neighborhood on your own. This walk, along with other self-guided walks in over 1,000 cities, can be found on the app "GPSmyCity: Walks in 1K+ Cities" which can be downloaded from iTunes App Store or Google Play to your mobile phone or tablet. The app's built-in GPS navigation functions allow following this walk route with ease. The app works both online and offline, so no data plan is needed when traveling abroad.