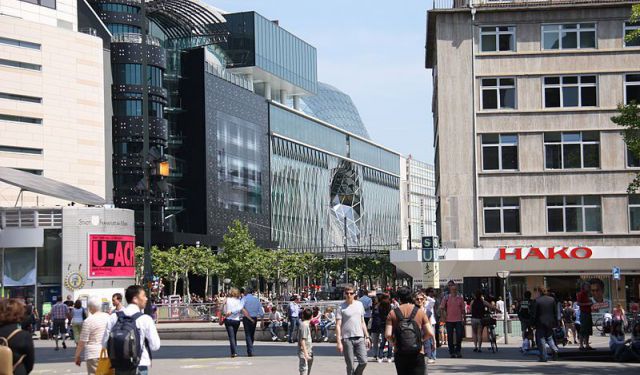 Frankfurt's Zeil (Golden Mile) is often called "the Fifth Avenue of Germany," and it is where the biggest department stores are located. This is the city’s premier pedestrianized shopping promenade, and it also encompasses boutiques of such upscale names as Tiffany and Cartier, and stores selling rare antiques and collectables. There are also two shopping centers, the Zeilgalerie and Frankfurt Hoch 4. Shop for clothes, shoes, leather, jewelry, consumer electronics and much more.

The Golden Mile’s tree-lined cobblestone path starts at Hauptwache and ends at the zoo. At its western end, the Zeil changes its name and becomes Freßgasse (the "shoveling alley"), home to several cafés, patisseries, ice-cream parlors and delicatessens. There is an eye-popping selection of savory and sweet treats on display, perfect for when you need to refuel during a shopping spree.

During your visit to the Zeilgalerie shopping center, save some time to check out the viewing platform on the roof. From here, there are miles and miles of impressive vistas, including the city's skyscrapers and the Taunus Mountains. Such is the popularity of the Zeil that it is among Germany's most profitable shopping streets. Whatever you want to buy, there's a good chance that you will find it in the shops and stores of this prime city center location.
Image Courtesy of Wikimedia and Tilman AB.
How it works: A discovery walk features a route using which you can explore a popular city neighborhood on your own. This walk, along with other self-guided walks in over 1,000 cities, can be found on the app "GPSmyCity: Walks in 1K+ Cities" which can be downloaded from iTunes App Store or Google Play to your mobile phone or tablet. The app's built-in GPS navigation functions allow following this walk route with ease. The app works both online and offline, so no data plan is needed when traveling abroad.