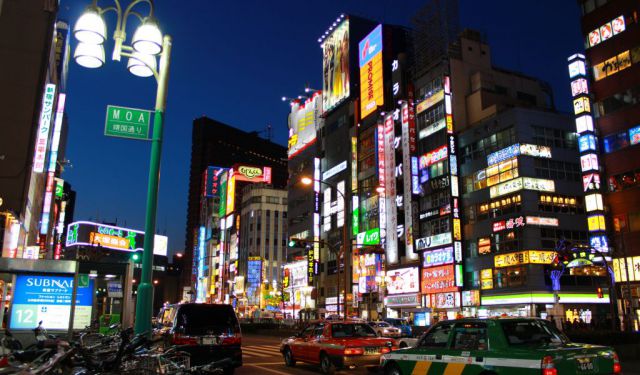 Kabukicho is Tokyo's red light and adult entertainment district, an incredible sight at night when it's lit up by thousands of neon lights. The locale’s look, feel and character are popular with movie makers needing great locations, and famous flicks such as Lost in Translation and The Fast and the Furious have been filmed here. The color, sights and sounds do wonderful things to the senses and with a plethora of bars, restaurants, theaters and love hotels, the visitor is spoilt for choice for things to see and do at night.

One of the most entertaining highlights is the Tokyo Robot Restaurant which has live shows that have to be seen to be believed. They involve robots, lasers, bikini-clad dancing girls, music, tanks and crazy costumes. For more nighttime fun, tour the bars of Golden Gai. The alleys of this bar district are so narrow that you wouldn't even be able to drive a car down them. They are lined with lots of tiny bars, some with seats for only a small handful of customers. Many of the watering holes are themed and focus on a particular musical genre. Kabukicho also turns on its daytime attractions. Go shopping on Yasukuni Dori, one of the most photographed streets in Tokyo. Then visit the 17th-century Hanazono Shrine, an important Shinto shrine set in beautiful grounds.
Image Courtesy of Flickr and Japanexperterna.se.
How it works: A discovery walk features a route using which you can explore a popular city neighborhood on your own. This walk, along with other self-guided walks in over 1,000 cities, can be found on the app "GPSmyCity: Walks in 1K+ Cities" which can be downloaded from iTunes App Store or Google Play to your mobile phone or tablet. The app's built-in GPS navigation functions allow following this walk route with ease. The app works both online and offline, so no data plan is needed when traveling abroad.

Image Courtesy of B Campbell.