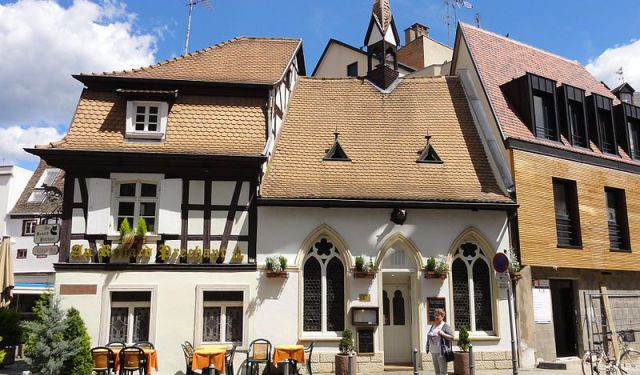 Image by Ralph Hammann on Wikimedia under Creative Commons License.

While Krutenau, or La Krut as it is known locally has some very old structures within its boundaries, it also possesses a youthful vigor and swagger, largely due to the presence of many students. The neighborhood is where the main university faculties are situated and the streets are sprinkled with trendy bars that offer the cheapest prices in the city. Come here for the lively bar scene and good restaurants as well as the art galleries and fashionable shops. They combine to make La Krut one of the liveliest parts of Strasbourg.

In addition to eating, drinking and shopping, La Krut has a number of standout sights. Visit the Gothic Sainte-Madeleine Church, which was built in 1478. Another Gothic marvel is the church of Saint-Guillaume. Amble down winding streets that reflect the layout of the old quarter and see remnants of Strasbourg's last medieval wall when you are in the rue du Fossé des Orphelins.

Other architectural features include Renaissance structures and buildings that date from the German annexation of Alsace Lorraine in the late 19th and early 20th centuries. There is also a granary from the 17th century and the old orphanage. This was built in 1869, and is a primary school today.
How it works: A discovery walk features a route using which you can explore a popular city neighborhood on your own. This walk, along with other self-guided walks in over 1,000 cities, can be found on the app "GPSmyCity: Walks in 1K+ Cities" which can be downloaded from iTunes App Store or Google Play to your mobile phone or tablet. The app's built-in GPS navigation functions allow following this walk route with ease. The app works both online and offline, so no data plan is needed when traveling abroad.