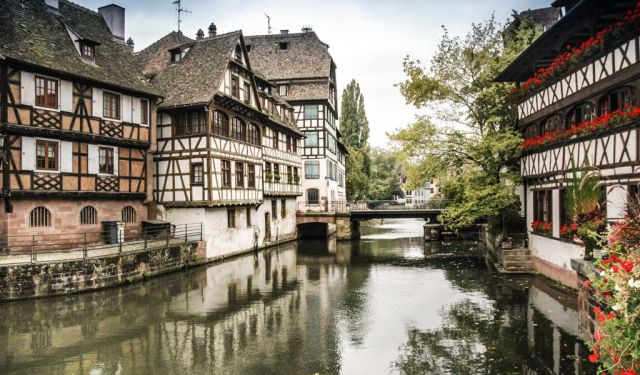 La Petite France is a charming and genteel neighborhood, crisscrossed by the canals of the River III. It is within easy walking distance of the center of Strasbourg, and your point of entry will be the Pont Saint-Martin.

As you cross over the bridge you should be able to see the Pont du Faisan, a revolving steel bridge that was constructed in the late 19th century. Stroll along quiet streets lined with half-timbered houses that date back to the 16th and 17th centuries, some with window boxes filled with flowers. One of the most famous is Maison des Tanneurs (House of Tanners), built in 1572. Today, it is a restaurant, popular for its chacroute, a recipe made from fermented cabbage. Take a table by a window to enjoy views over the canals.

The area has several more restaurants by the water where you can sample traditional Alsatian cuisine accompanied by gorgeous views. As you are making your way through Le Petite France, you may also be able to see the workings of the canal locks. At the far end of the district, beyond the towers and covered bridges is the Barrage Vauban. This beautiful bridge, which looks like a house stretched across the waterway was built in 1681 as a defensive structure.
Image Courtesy of Flickr and Yves Gremillet.
How it works: A discovery walk features a route using which you can explore a popular city neighborhood on your own. This walk, along with other self-guided walks in over 1,000 cities, can be found on the app "GPSmyCity: Walks in 1K+ Cities" which can be downloaded from iTunes App Store or Google Play to your mobile phone or tablet. The app's built-in GPS navigation functions allow following this walk route with ease. The app works both online and offline, so no data plan is needed when traveling abroad.