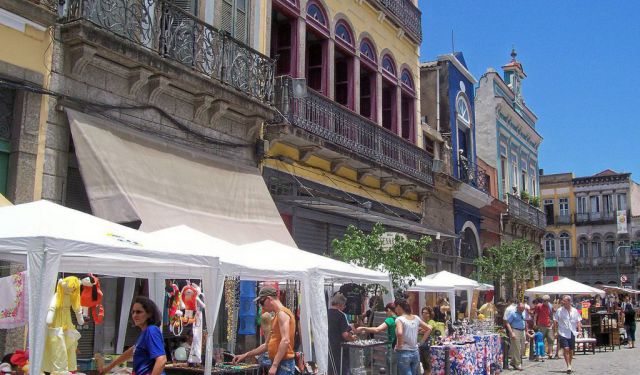 Situated in a delightful old neighborhood of 18th, 19th and 20th-century colored colonial buildings are a number of charming antique stores and secondhand shops. Behind their front doors is a bounty of fascinating pieces, including colonial furniture, traditional Brazilian objects, ceramics, jewelry, glassware and much more.

The main concentration of these stores is around Rua do Lavradio in the heart of Lapa. This important thoroughfare was built toward the end of the 18th century and became a link between the Arcos da Lapa aqueduct and Praça Tiradentes. One of the best times to be in the area is on the first Saturday of every month. This is when the Feira do Rio Antigo, or "Old Rio Fair" is held. This popular antiques fair runs the entire length of the street and is open throughout the day. The stalls are piled high with intriguing items, some of which are very expensive and valuable, while others are more toward the budget-friendly end of the spectrum.

As you browse what's on show, you will most likely be entertained by street performers. There are often musical and dance acts here, and occasionally drama shows. When you want a break from your antique and bargain hunting, pull up a chair in one of the area’s pubs for a revitalizing drink and a meal.
Image Courtesy of Flickr and Colin Hepburn.
How it works: A discovery walk features a route using which you can explore a popular city neighborhood on your own. This walk, along with other self-guided walks in over 1,000 cities, can be found on the app "GPSmyCity: Walks in 1K+ Cities" which can be downloaded from iTunes App Store or Google Play to your mobile phone or tablet. The app's built-in GPS navigation functions allow following this walk route with ease. The app works both online and offline, so no data plan is needed when traveling abroad.

Image Courtesy of Jorge from Brazil.