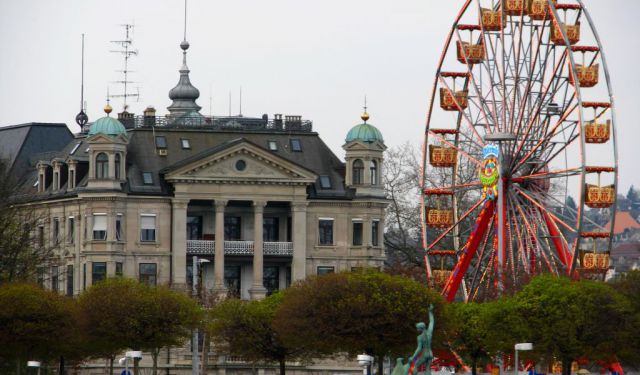 The Lindenhof quarter is like an open-air museum, being one of the oldest neighborhoods in the city. It offers a fascinating trip back into the past with its historical buildings, medieval alleyways and cobblestone streets.

Stop by the quarter's beautiful old churches, including the Fraumünste and the Augustinerkirche. St. Peter's is the oldest church in Zurich and elements of its Roman structures can still be seen. It has been rebuilt and restored several times over the centuries and the current building was consecrated at the beginning of the 18th century. The church's tower has the largest clock face in Europe, measuring 8.6 meters (26.2) feet in diameter.

Stroll down Augustinergasse, a medieval lane, and marvel at the centuries-old houses with their carved wooden bay windows. Visit the lane's clutch of touristy shops, coffeehouses and restaurants. Take in some gorgeous views from Lindenhof Hill. This small green square is perched on top of a hill overlooking the Limmat River. The hill has a fascinating history and in the past has been a location of a Celtic settlement and a medieval castle. In addition to the views, you can also play a game of chess on the giant chessboard. While you are in the hill area, go to the nearby the craftsmen’s alley, Schipfe where you can see the work of many artisans.
Image Courtesy of Wikimedia and Roland zh.
How it works: A discovery walk features a route using which you can explore a popular city neighborhood on your own. This walk, along with other self-guided walks in over 1,000 cities, can be found on the app "GPSmyCity: Walks in 1K+ Cities" which can be downloaded from iTunes App Store or Google Play to your mobile phone or tablet. The app's built-in GPS navigation functions allow following this walk route with ease. The app works both online and offline, so no data plan is needed when traveling abroad.