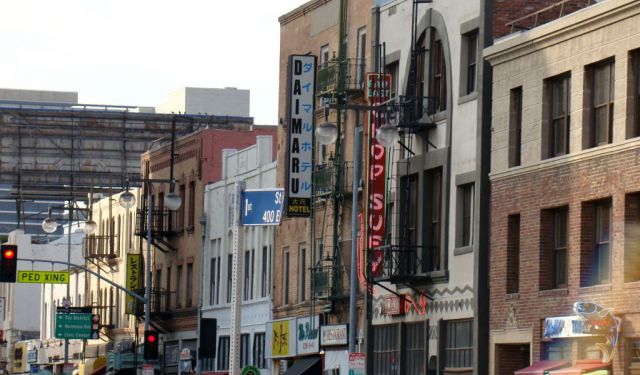 Image by vmiramontes on Flickr under Creative Commons License.

Shrines, temples, gardens and some of the best Japanese restaurants in Los Angeles await the visitor to Little Tokyo. Also known as the Little Tokyo Historic District, the neighborhood got its start in the late 19th century and is one of three official Japantowns in the United States.

The area is brimming with a mouthwatering array of fantastic Japanese eateries, from popular lunch spots to late night restaurants as well as a generous peppering of sushi bars. Away from the restaurants, you will discover a variety of shops selling books, clothing, accessories and authentic and quirky items. If food is still on your mind, visit Little Tokyo's two wagashi (Japanese sweets) shops. They are among the oldest food establishments in Los Angeles.

Tour the neighborhood's Japanese Christian churches and Buddhist temples, including Koyasan Buddhist Temple and Higashi Honganji Buddhist Temple. Unwind in the blissful tranquility of a public garden, such as the James Irvine Japanese Garden. It is also known as the "Garden of the Clear Stream" and features a stream, handcrafted cedar bridges and many colorful flowers, plants and trees. The green sanctuary was designed in the Zen tradition of the famous gardens of Kyoto, the spiritual center of Zen Buddhism in Japan.
How it works: A discovery walk features a route using which you can explore a popular city neighborhood on your own. This walk, along with other self-guided walks in over 1,000 cities, can be found on the app "GPSmyCity: Walks in 1K+ Cities" which can be downloaded from iTunes App Store or Google Play to your mobile phone or tablet. The app's built-in GPS navigation functions allow following this walk route with ease. The app works both online and offline, so no data plan is needed when traveling abroad.