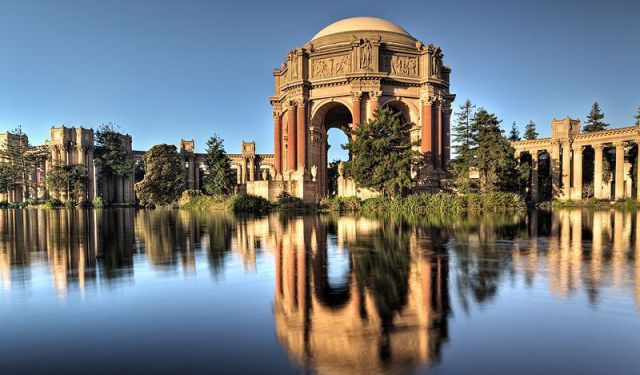 Image by Kevin Cole on Wikimedia under Creative Commons License.

Savor a delightful few hours strolling through and exploring the Marina district, a beautiful waterfront locale offering superlative views, landmark architecture and excellent shopping. The neighborhood sits on the edge of the bay, a great spot from which to admire the Golden Gate Bridge and to see the bay's sometimes turbulent waters.

The young, upscale area is filled with a plethora of shops, boutiques, stores and restaurants. After your shopping expedition, treat yourself to a delightful meal with waterfront views. Most of the restaurants are of a very high standard and there is a taste bud-pleasing range of cuisines on offer.

One of the Marina district’s most popular attractions is the Palace of Fine Arts, which was built for the 1915 Panama-Pacific Exposition. Originally designed to honor the completion of the Panama Canal, the exhibition's buildings became hugely symbolic of the city's recovery from the devastating earthquake of 1906. The magnificent looking domed structure is the only building left standing on its original location within the exposition's fairgrounds.

Meander through the grounds that surround the palace and sit by the lagoon where you may be able to glimpse many different kinds of wildlife. Among the animals you can see are frogs, ducks, swans, turtles and geese.
How it works: A discovery walk features a route using which you can explore a popular city neighborhood on your own. This walk, along with other self-guided walks in over 1,000 cities, can be found on the app "GPSmyCity: Walks in 1K+ Cities" which can be downloaded from iTunes App Store or Google Play to your mobile phone or tablet. The app's built-in GPS navigation functions allow following this walk route with ease. The app works both online and offline, so no data plan is needed when traveling abroad.

Image by Prayitno / Thank you for (6 millions +) views under Creative Commons License.