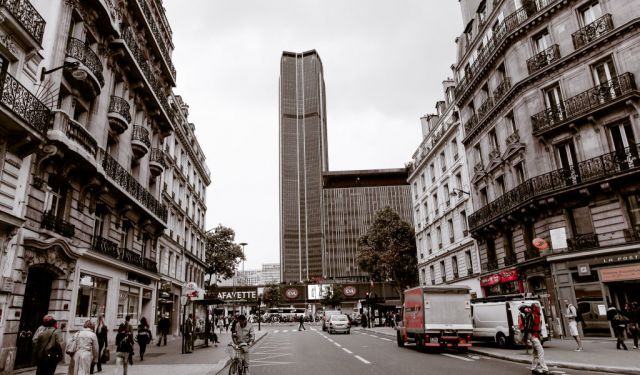 Follow in the footsteps of famous artists, writers and politicians with a visit to Montparnasse. In the years that followed World War I, this area became a bohemian magnet. Among the famous names to have lived here were the Spanish painter Pablo Picasso, French writer Jean Cocteau and the French poet and playwright Guillaume Apollinaire, who died in 1918. Some political exiles also made Montparnasse their home, including Vladimir Lenin and Leon Trotsky. A nice way to get a feel for the place is to walk on Rue Daguerre, a pedestrianized permanent market street.

Take in spectacular views of the arrondissement and the rest of the city from the Maine-Montparnasse Tower, a 700-foot (213-meter) skyscraper in its northern corner. In addition to the observation deck there is also a shopping plaza on the top floor. Some people have commented that the views from here are even better than those from the Eiffel Tower's viewing platforms.

After scaling the area’s heights, venture underground to explore the Catacombs of Paris. This is a labyrinth of underground tunnels, some of which have walls embedded with skulls, bones and other skeletal fragments. There are the remains of approximately six million Parisians in the catacombs, many of which were transferred here during the 18th and 19th centuries when some of the city’s graveyards were being closed.
Image Courtesy of Flickr and Cristian Bortes.
How it works: A discovery walk features a route using which you can explore a popular city neighborhood on your own. This walk, along with other self-guided walks in over 1,000 cities, can be found on the app "GPSmyCity: Walks in 1K+ Cities" which can be downloaded from iTunes App Store or Google Play to your mobile phone or tablet. The app's built-in GPS navigation functions allow following this walk route with ease. The app works both online and offline, so no data plan is needed when traveling abroad.