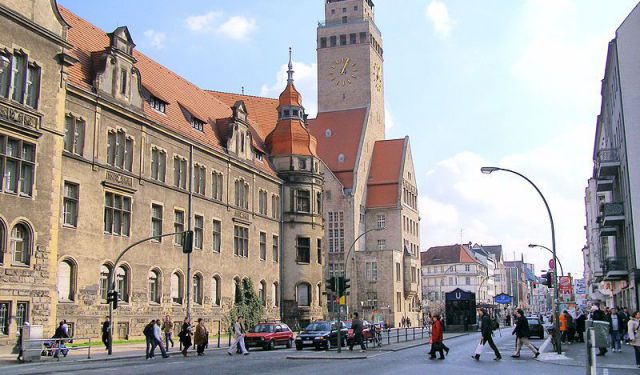 Image by -jkb- on Wikimedia under Creative Commons License.

Neukölln is Berlin's bohemian heart, a colorful district with a village-like feel where you can discover architectural treasures, see some opera and experience all the charm and excitement of an area that is a melting pot of cultures. There is history at just about every turn, especially in the winding streets of Alt-Rixdorf, the old bohemian village.

On Karl-Marx-Allee, you can see the 1950s residential blocks that were designed in classical socialist style. Take in some of the area's cultural highlights. Reserve seats for an opera performance at the Neukölln Opera House and catch a truly magical show at the Puppet Theater. Tour Britz Castle, a former manor house that has reconstructed period rooms from the late 19th century. Then enjoy some heavenly downtime in Britz Garden. The large garden features lakes, playgrounds and themed gardens such as the geological garden and the great outdoor laboratory.

If you don't want to walk around the 100-acre (40-hectare) pastoral attraction, explore part of the area aboard the park train. Expand your taste palate with a visit to the Turkish market at Maybachufer. More culinary delights await you in the neighborhood’s mix of international restaurants.
How it works: A discovery walk features a route using which you can explore a popular city neighborhood on your own. This walk, along with other self-guided walks in over 1,000 cities, can be found on the app "GPSmyCity: Walks in 1K+ Cities" which can be downloaded from iTunes App Store or Google Play to your mobile phone or tablet. The app's built-in GPS navigation functions allow following this walk route with ease. The app works both online and offline, so no data plan is needed when traveling abroad.