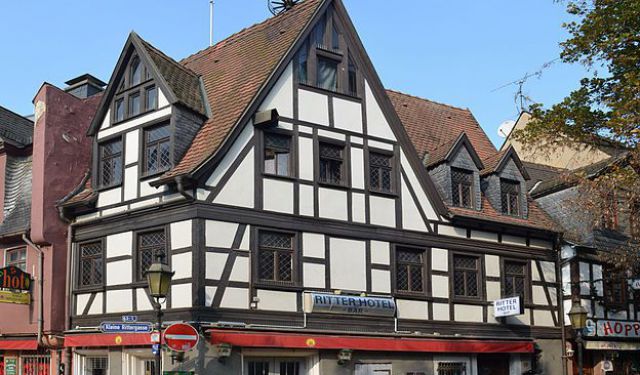 Marvel at the delightful sights inside the old heart of Frankfurt. Amble along its cobblestone streets and visit small squares bordered by frame houses. Along the way, you will come across lots of water features, because this area probably has the highest concentration of working fountains in the city. Watch out when you walk past the Frau Rauscher fountain, because it spits out water at irregular intervals, which often catches people by surprise.

The area is primarily divided into two parts; one includes the Museum Mile and the Schweizer Strasse, a cosmopolitan street, while the other is the oldest part. This would have been inside the city walls during the 12th century. In addition to its historic charms and old world feel, Old Sachsenhausen is known for its cider, and there are more than 100 traditional bars serving the sweet tasting alcoholic beverage.

Two of Frankfurt's most traditional cider houses can be found on Schweizer. This old part of Frankfurt will enchant you no matter what time of day you visit, but a good time to come is at night. Go to the large and small Rittergasse, the Paradiesgasse and Klappergasse. On these streets, shops stay open and people enjoy alfresco meals and drinks on the terraces of bars and restaurants.
Image Courtesy of Wikimedia and Karsten Ratzke.
How it works: A discovery walk features a route using which you can explore a popular city neighborhood on your own. This walk, along with other self-guided walks in over 1,000 cities, can be found on the app "GPSmyCity: Walks in 1K+ Cities" which can be downloaded from iTunes App Store or Google Play to your mobile phone or tablet. The app's built-in GPS navigation functions allow following this walk route with ease. The app works both online and offline, so no data plan is needed when traveling abroad.

9) Church and House of the Teutonic Order