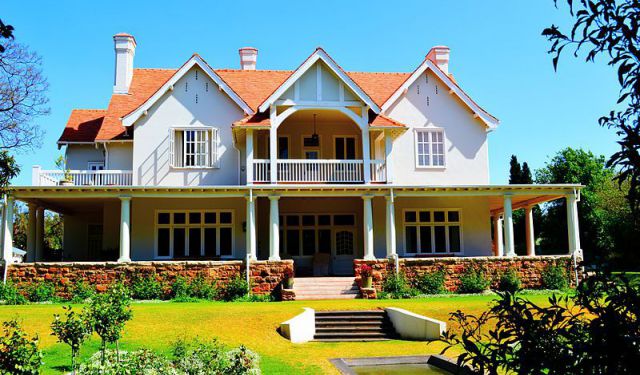 Image by Mariannebritsstrodl on Wikimedia under Creative Commons License.

For everyone who is interested in architecture, Parktown is an exceptional area to explore. It is the oldest and most elite district of the city and you will find stately buildings that date back to the late 19th century. There are some true gems among these somewhat imposing structures, such as The View – named for its once impressive views of the distant Magaliesberg – a Victorian-style house built in 1897. It has a rather ugly corrugated-iron roof, but the red brick walls give it a certain elegant splendor. The house, which is the oldest in Johannesburg, is now a museum so you can wander through it to admire the intricate plasterwork on the ceilings and the oak-paneled walls.

Another impressive building is Dolobran, which was built in 1905 and has a roof made of red tiles shipped here from the South of France, and amazing stained-glass windows. Northwards House was designed by Sir Herbert Baker and was built of Koppie stone by local craftsmen. Its rather cozy, homey air is a distinct contrast to Hazeldene Hall which was built in 1903 and boasts wrought-iron verandas imported from Scotland and the reputedly haunted North Lodge, built in 1906. Perhaps the most beautiful building in the area is Emoyeni, an English Renaissance-style stately home built in 1906, and now a Johannesburg Heritage Site.
How it works: A discovery walk features a route using which you can explore a popular city neighborhood on your own. This walk, along with other self-guided walks in over 1,000 cities, can be found on the app "GPSmyCity: Walks in 1K+ Cities" which can be downloaded from iTunes App Store or Google Play to your mobile phone or tablet. The app's built-in GPS navigation functions allow following this walk route with ease. The app works both online and offline, so no data plan is needed when traveling abroad.

Image by The Heritage Portal under Creative Commons License.