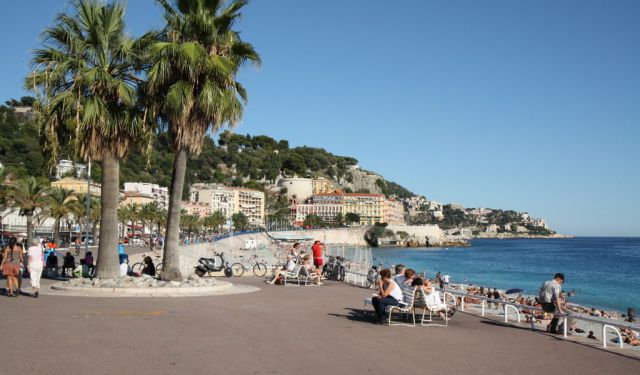 The Promenade des Anglais has been a Nice landmark since the first half of 19th century, a popular place for a stroll with gorgeous views of the sea. The paved walkway stretches for 3 miles (5 kilometers) and is known by locals as "La Prom". It was paid for by wealthy British people who used to spend their winters here, away from the harsher seasonal weather in England. This fact is recognized in the promenade's name.

As with other French Riviera promenades, one side is lined with big hotels, luxury apartment blocks, casinos and fabulous restaurants. Also on the long route, find bakeries, grocery stores and wine shops. During the day, it is a very lively spot as joggers, cyclists, pedestrians and rollerbladers stretch their legs.

Go for a stroll and stop by a café for a drink and a pastry. The walkway is part of one continuous bay that consists of more than 30 beaches, including both public and private beaches. Rent a sun lounger and parasol and unwind with nothing but the beautiful blue sea in front of you.

In addition to being the focus of daily activities, the Promenade des Anglais hosts several of the city’s biggest annual celebrations. Among them are the Carnaval de Nice and La Fête Nationale.
Image Courtesy of Flickr and Olga Khomitsevich.
How it works: A discovery walk features a route using which you can explore a popular city neighborhood on your own. This walk, along with other self-guided walks in over 1,000 cities, can be found on the app "GPSmyCity: Walks in 1K+ Cities" which can be downloaded from iTunes App Store or Google Play to your mobile phone or tablet. The app's built-in GPS navigation functions allow following this walk route with ease. The app works both online and offline, so no data plan is needed when traveling abroad.