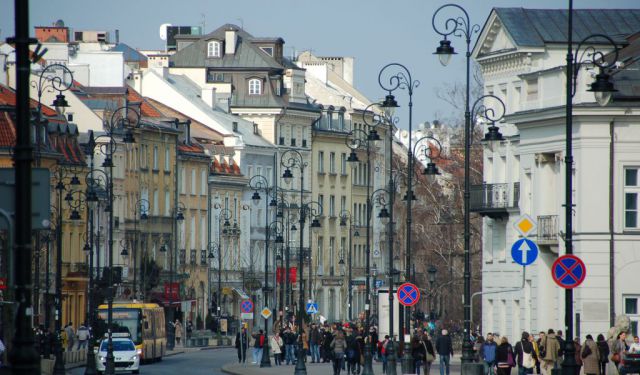 Thrill to the many architectural highlights of a walk in Warsaw's city center district. The Royal Route is a must, and delights with its series of old royal residences, parks and churches.

Stroll down Krakowskie Przedmieście, one of the most prestigious and prettiest streets in the city. The wide boulevard starts at the Royal Castle in the Old Town and along its length you will see numerous glass-covered placards with reproductions of Canaletto's paintings of 18th century Warsaw. The street is closed to drivers in the summer, becoming a popular and welcoming place to promenade.

One of the most famous landmarks on Krakowskie Przedmieście is St. Anne's Church, a 15th-century building that has come through the centuries despite wars and fires. The splendid neoclassical façade that is seen today dates back to the late 18th century.

After your visit to the church, make your way over to the Presidential Palace, construction of which started in 1643. Since 1994, the magnificent building has served as the official residence of the Polish president. Part of the Royal Route encompasses Nowy Swiat. This historic thoroughfare is a big draw because of its shops and extensive range of bars, cafés and restaurants.
Image Courtesy of Flickr and Krzysztof Belczyński.
How it works: A discovery walk features a route using which you can explore a popular city neighborhood on your own. This walk, along with other self-guided walks in over 1,000 cities, can be found on the app "GPSmyCity: Walks in 1K+ Cities" which can be downloaded from iTunes App Store or Google Play to your mobile phone or tablet. The app's built-in GPS navigation functions allow following this walk route with ease. The app works both online and offline, so no data plan is needed when traveling abroad.

5) Krakowskie Przedmieście Street, Church of Saint Joseph of the Visitationists