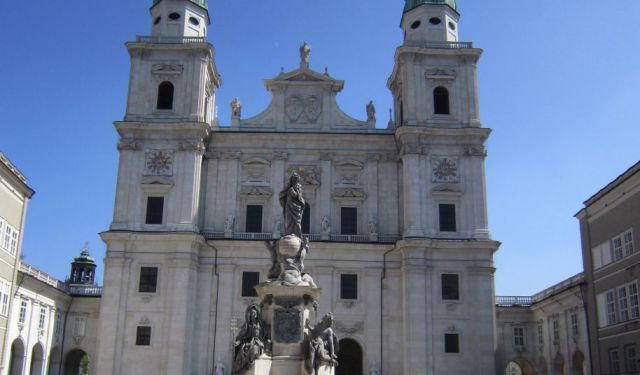 The mesmerizing old town of Salzburg is a UNESCO World Cultural Heritage Site and rightly so for its beautiful jumble of cobblestone streets, old churches, delightful squares and Medieval and Baroque buildings. This is one of the best-preserved old city centers north of the Alps and there are so many highlights. Stop by historic churches with spires and cupolas that dot the city skyline.

Visit Domplatz (Cathedral Square), at the center of which is a beautiful statue of the Virgin Mary. At Christmas, a huge market is held here. Go to Kapitelplatz, one of the biggest Baroque squares in the city and admire its old buildings, including the bishop’s palace. There is more Baroque splendor on display at Residenzplatz, a beautiful square with a fountain made of marble. This area hosts numerous concerts as well as screenings of big sporting events. Another notable square is Mozartplatz, a tribute to Wolfgang Amadeus Mozart, a famous son of the city. This plaza is decorated with a statue of the composer.

Stop by Makartplatz where the Mozart family used to live, and tour their old house which is now dedicated to the musician's life and work. Witness more aged buildings at Alter Markt, the old marketplace which dates back to the 13th century. For shopping, head over to Sigmund Haffner Gasse, one of the city's oldest streets. Browse its many galleries, jewelry stores and luxury boutiques. A particularly intriguing Salzburg location is the medieval Steingasse Lane, which is where there are numerous brothels. They’re identified by little red lanterns in front of their main entrances. The oldest bordello is Maison de Plaisir which is said to have been in business during Mozart's time.
Image Courtesy of Wikimedia and In-arcadia-ego-at.
How it works: A discovery walk features a route using which you can explore a popular city neighborhood on your own. This walk, along with other self-guided walks in over 1,000 cities, can be found on the app "GPSmyCity: Walks in 1K+ Cities" which can be downloaded from iTunes App Store or Google Play to your mobile phone or tablet. The app's built-in GPS navigation functions allow following this walk route with ease. The app works both online and offline, so no data plan is needed when traveling abroad.