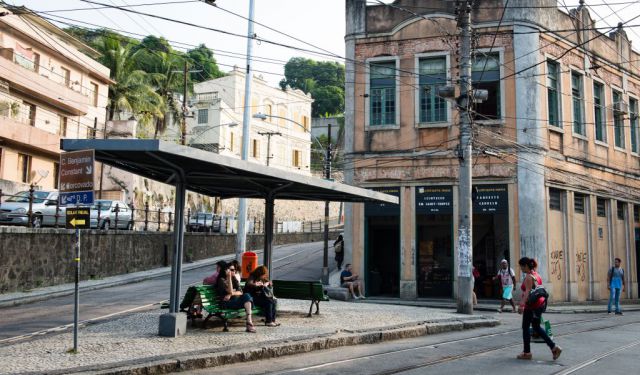 Benefiting from an incredible location in the hills of central Rio, Santa Teresa takes your breath away. From its lofty perch there are magnificent panoramas of the city below. When you can turn your gaze away from the incredible vistas, check out the neighborhood's other delights. They include the murals on its walls that brighten up the entire area and the winding cobblestone streets.

Santa Teresa takes its name from an old Carmelite convent and was once the home of the city's wealthy elite, hence the numerous grand old houses from the last century, featuring Portuguese and French architecture. Following a period of decline, Santa Teresa was reborn in the 1970s and '80s when artists, writers and artisans moved into the locale.

For some outstanding art, spend some time in The Museu da Chacara do Céu. There are works by such luminaries as Dali, Picasso and Monet as well as Chinese sculptures from the Shung dynasty and the creative outpourings of Brazilian artists. Appreciate the exquisite beauty of the Escadaria Selaron, a famous stairway where every step is different and made from tiles that originated in dozens of countries.

Also, worth a visit is the Largo do Guimarães in the heart of the neighborhood. It is known for its bars, restaurants and handicraft shops and for being the focal point of carnival activities.
Image Courtesy of Flickr and Vincent Poulissen.
How it works: A discovery walk features a route using which you can explore a popular city neighborhood on your own. This walk, along with other self-guided walks in over 1,000 cities, can be found on the app "GPSmyCity: Walks in 1K+ Cities" which can be downloaded from iTunes App Store or Google Play to your mobile phone or tablet. The app's built-in GPS navigation functions allow following this walk route with ease. The app works both online and offline, so no data plan is needed when traveling abroad.