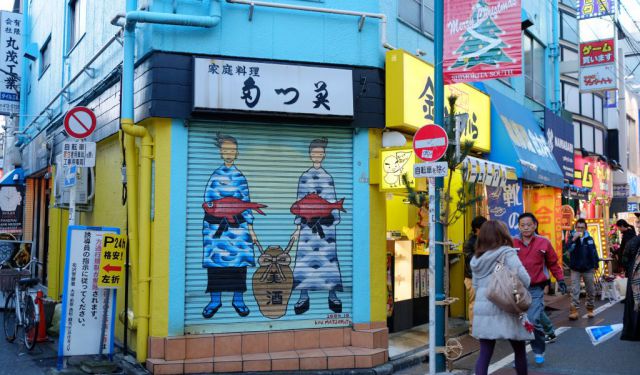 Arts, culture, fashion and leisure make for a heady blend in the hip commercial and entertainment district of Shimokitazawa. This laidback bohemian neighborhood is also known as the “Town of Theater” for its huge collection of fringe theaters. Some of the venues may well be small, but their reputations are huge and many of the country's top theater companies stage their shows here. Originality isn't only found in the theaters, it can also be seen in some of the shops, where owners have created hybrid enterprises, for example a café combined with a record shop.

A pleasant way to pick up on the area's cool vibe is to sit in a bar or café and watch trendy residents and visitors pass by your window. Now, if you’re big on fashion, create your own look by mixing and matching clothes and fabrics from the neighborhood’s many second clothing stores.

Shoppers are also attracted to the area for its shops selling miscellaneous items from the 1970s, such as old animation-themed toys. The sun going down doesn’t signal the end of business here. Shimokitazawa is also a popular nightlife destination. Feast on sushi and satays in a cozy Japanese pub-restaurant, watch a fringe performance and then round off the evening with some karaoke or cool, live licks in a jazz bar.
Image Courtesy of Flickr and chinnian.
How it works: A discovery walk features a route using which you can explore a popular city neighborhood on your own. This walk, along with other self-guided walks in over 1,000 cities, can be found on the app "GPSmyCity: Walks in 1K+ Cities" which can be downloaded from iTunes App Store or Google Play to your mobile phone or tablet. The app's built-in GPS navigation functions allow following this walk route with ease. The app works both online and offline, so no data plan is needed when traveling abroad.