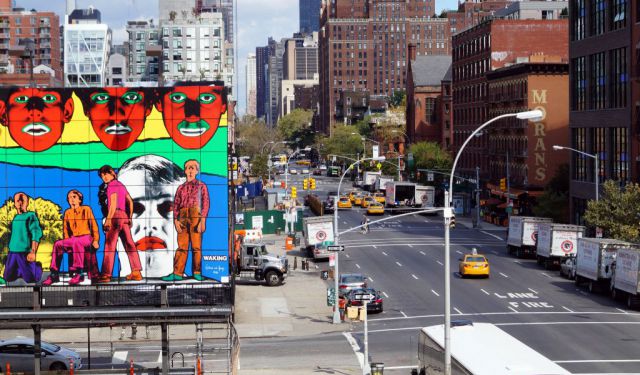 Soho is easily a place where you can shop until you drop. Come on your vacation with empty suitcases and leave with them crammed with lots of delightful goodies. Soho, sometimes capitalized as SoHo is a neighborhood in Lower Manhattan known for its eclectic mixture of pricy boutiques, where you can buy everything from cutting-edge designs to vintage looks and cult fashions.

However, it hasn’t always been this way. The locale fell into decline during the first half of the 20th century, but following an influx of artists in the 1960s and ‘70s became an area transformed. Since then SoHo has become a model of gentrification for other parts of the country. Be part of the fashionable crowd and join the runway models and celebrities who can be seen browsing the neighborhood's stores. The variety of choices is outstanding, because SoHo shopping is not just confined to one small sub-district; it covers the entire area.

In addition to the fabulous clothes, there is a charming, easygoing atmosphere pervading the streets, something you don’t always necessarily associate with fashion enclaves. And you don't have to spend a king's ransom when you are shopping here. There are national and international chain store outlets in the northern part of the neighborhood, along Broadway and Prince and Spring Streets. Items here are more budget friendly. As you progress through SoHo, you will undoubtedly come across many street vendors selling jewelry, T-shirts, accessories and much more.
Image Courtesy of Flickr and Fabian Schreiber.
How it works: A discovery walk features a route using which you can explore a popular city neighborhood on your own. This walk, along with other self-guided walks in over 1,000 cities, can be found on the app "GPSmyCity: Walks in 1K+ Cities" which can be downloaded from iTunes App Store or Google Play to your mobile phone or tablet. The app's built-in GPS navigation functions allow following this walk route with ease. The app works both online and offline, so no data plan is needed when traveling abroad.