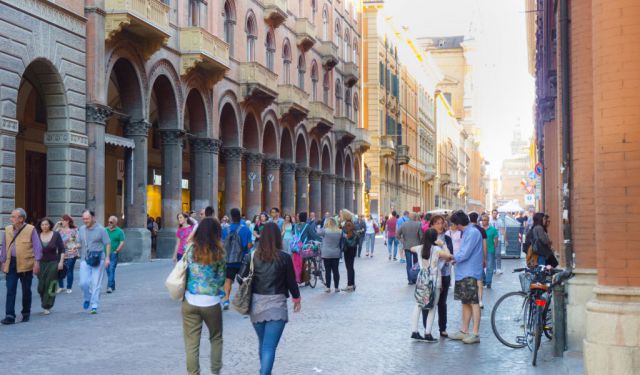 Image by Dave Collier on Flickr under Creative Commons License.

The center of Bologna is a vibrant shopping hub to rival those of other great Italian cities, including Rome and Milan. This is especially so at weekends when the Zone "T" (via Rizzoli, Via Independenza and Via Ugo Bassi) and the streets east of Piazza Maggiore are closed to traffic. Lining them are stores of the biggest Italian design names as well as many antique and book stores. Via dell' Indipendenza is the main street and its shops sell just about everything under the sun.

Other great shopping streets in the central area include Rizzoli, Via D'Azeglio and Via Farini. When you stroll through the streets to the east of Piazza Maggiore, collectively known as the Quadrilatero district, you will come across lots of stalls filled with delicious food. This includes fresh fish and seasonal fruit.

Sightseeing opportunities abound in Bologna’s center. For many years, a prominent market was held at Piazza Maggiore, a beautiful square in the heart of the Bologna. The plaza's origins lie in the 13th century, and surrounding it are buildings that date back to medieval times. They include the city's cathedral, although much of this structure is from the 17th century. Next to Maggiore is Piazza del Nettuno, which features the Fountain of Neptune, This beautiful water feature was completed in the second half of the 16th century and features a bronze figure of Neptune, the Roman god of the sea.
How it works: A discovery walk features a route using which you can explore a popular city neighborhood on your own. This walk, along with other self-guided walks in over 1,000 cities, can be found on the app "GPSmyCity: Walks in 1K+ Cities" which can be downloaded from iTunes App Store or Google Play to your mobile phone or tablet. The app's built-in GPS navigation functions allow following this walk route with ease. The app works both online and offline, so no data plan is needed when traveling abroad.