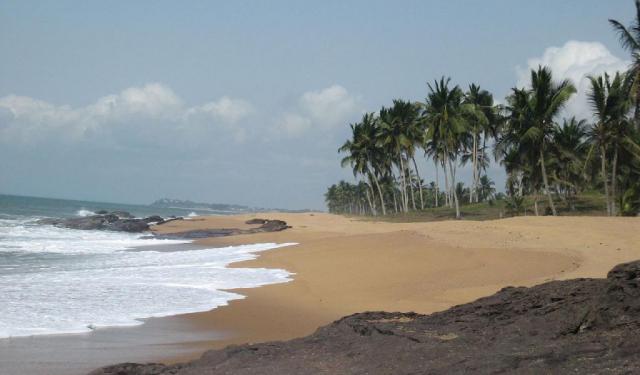 Accra, the capital of Ghana, sitting on the Gulf of Guinea coast in West Africa, is a charming city renowned for its golden sand beaches and bustling nightlife. Wandering along its coastline, enjoying the Atlantic breeze, you will find alongside many entertainment venues a number of historic sites as well. The most prominent of them, undoubtedly, is the Kwame Nkrumah Memorial Park commemorating Ghana’s first president. There are also several old forts worth checking out. To learn more about these and other attractions of Accra's Waterfront, take this tour and immerse yourself deeper in the history and culture of Ghana.
Image Courtesy of Wikimedia and Erik Kristensen.
How it works: Download the app "GPSmyCity: Walks in 1K+ Cities" from iTunes App Store or Google Play to your mobile phone or tablet. The app turns your mobile device into a personal tour guide and its built-in GPS navigation functions guide you from one tour stop to next. The app works offline, so no data plan is needed when traveling abroad.

Today’s lighthouse was built instead of an old Jamesfort Light dating back to 1871. It is located in the James Town district of Accra and was erected in the 1930s. The Lighthouse is the highest point of the place, and it is seen from a distance up to 16 nautical miles. It is a stone structure, 30 meters high, and is still operating today. Taking photos of the construction is forbidden, but you can get official permission.
Image Courtesy of Flickr and Furkan Javaid.
2

Built in the middle of the 17th century as a trade centre, the James Fort later became a slave fort. It is situated in the oldest part of the city. During the British colonization, the fort served as the main centre of administration. Today it houses a prison but it is not possible to visit it. Moreover, as is the case for numerous other buildings in Accra, it is prohibited to take photos of it.
Image Courtesy of Flickr and Hisham.
3

Ussher Fort is a fort built by the Dutch in 1649 as. Part of the Dutch Gold Coast, Fort Crèvecœur was one of three forts that Europeans built in the region during the middle of the 17th Century. The Anglo-Dutch Gold Coast Treaty from 1867, which defined areas of influence on the Gold Coast, transferred it to the British in 1868. Ussher Fort is currently being restored with funds from the European Commission and UNESCO. The purpose is to convert it to a museum and International Documentation Centre.
Image Courtesy of Flickr and Kara Van Malssen.
Sight description based on Wikipedia.
4

Osekan Restaurant attracts lots of visitors, not only by its proximity to the Gulf of Guinea but also thanks to its friendly ambience and excellent service. Get a table, order a fried chicken and some drinks and enjoy the sights of the coast. The prices are reasonable and the food is good. Here you will see the most picturesque sunset in the city.
Image Courtesy of Flickr and acameronhuff.
5

Holy Trinity Cathedral is an Anglican church built in 1894, the period of British colonization. In 1949, the church obtained the status of Cathedral. The Cathedral is located on 28th February Road in a busy area with a lot of shops, banks and offices. It is famous because The Prince of Wales, Queen Elizabeth II and Prince Philip worshipped here.
Image Courtesy of Wikimedia and Guido Sohne.
6

In front of a building with beautiful architecture, the Supreme Court, you will see three bronze busts glittering in the African sunshine. These are statues of judges that were murdered for their jobs. The attack took place in 1982, a time of instability and military control. Every year on June 30th, the memorial ceremony is held in front of the Court and the three statues of murdered judges.
Image Courtesy of Flickr and Guido Sohne.
7

Kwame Nkrumah Memorial Park was dedicated to the first president of the country who led Ghana to independence from British colonization. He was recognized as “Man of the millennium” of Ghana. There is a monument of Kwame Nkrumah and his mausoleum in the park. You can also visit a small museum to learn more about the life and activity of Ghana's most important person of the 20th century, through books, photographs and other objects.
Image Courtesy of Wikimedia and Flowizm.
8

The Center for National Culture is the best place to learn the specialty of local art and culture. It was established in 1982. The center specializes in such arts and crafts as ceramics and pottery, rattle making, weaving, wood carving, painting and sculpture. There is also an Art Gallery, cafes and restaurants and a textile market where you can buy various art objects and handicrafts. The Center for National Culture often organizes theater and dance performances and local music concerts.
Image Courtesy of Flickr and Reüel van der Steege.
9

Independence Square (also known as "Black Star Square") is one of the most popular tourist attractions in Ghana. It was built in 1961 and it contains monuments to Ghana's independence struggle, including the Independence Arch, Black Star Gate, and the Liberation Day Monument. The Independence Square is the second largest City Square in the world after the Tiananmen Square in Beijing, China. With a capacity of about 30,000 people, the Black Star Square is a site for Ghana's Independence Day parades which falls on the 6th of March every year and for all major national public gatherings and national festivals.

As of 2011, the Independence Arch is guarded by several soldiers who prohibit people of taking close up pictures of the Arch and asking visitors for official permission, but you are free to take pictures of the area. There is also a fascinating view of the Guinea Gulf.

Image Courtesy of Flickr and Stig Nygaard.
Sight description based on Wikipedia.
10

Osu Castle, also known as Fort Christiansborg is a castle on the coast of the Atlantic Ocean's Gulf of Guinea.The first substantial fort was built by the Danish in the 1660s, though the castle has changed hands between Denmark, Portugal, the Akwamu, the British, and finally post-Independence Ghana, and was rebuilt numerous times.

For most of the castle's history it has been the seat of government in Ghana with some interruptions. Osu Castle remains the seat of government in Ghana, employing 2,100 workers. The present castle is made up of various extensions to the original and is thus in an unorthodox shape; additional rooms were built in order to accommodate Queen Elizabeth II's visit in 1961, one year after Ghana became a republic. Osu Castle is not open to the public, and photography of it is restricted.

Image Courtesy of Wikimedia and Stig Nygaard.
Sight description based on Wikipedia.