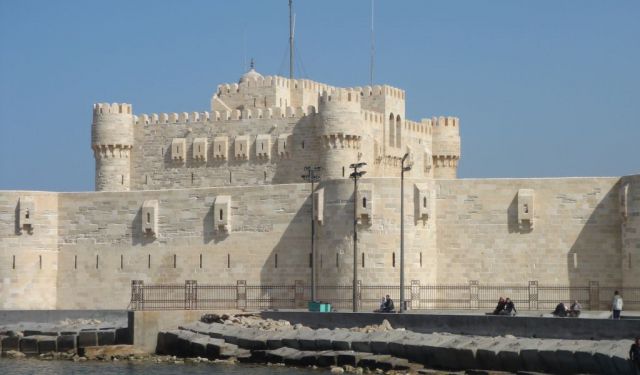 The second largest city in Egypt, Alexandria used to be one of the most significant and famous cities in the world. Founded by Alexander the Great, Alexandria was Egypt's capital for about a thousand years. The city was well known because of its library, the biggest in the ancient world, the light house and many other outstanding buildings. Check out Alexandria's top attractions in the following self-guided tour.
Image Courtesy of Wikimedia and Ahmed Dokmak.
How it works: Download the app "GPSmyCity: Walks in 1K+ Cities" from iTunes App Store or Google Play to your mobile phone or tablet. The app turns your mobile device into a personal tour guide and its built-in GPS navigation functions guide you from one tour stop to next. The app works offline, so no data plan is needed when traveling abroad.

Located in Citadel of Qaitbey, the Naval Museum of Alexandria is a small museum that contains a lot of artifacts and objects. The artifacts include Ottoman weapons and French coins, which remained after Nelson bombarded Napoleon's fleet in the year 1798. Nowadays the museum is a very popular tourist destination.
Image Courtesy of Wikimedia and József Süveg.
2

2) Citadel of Qaitbay (must see)

The Citadel of Qaitbay is a 15th century defensive fortress located on the Mediterranean sea coast, built upon/from the ruins of the Lighthouse of Alexandria. It was established in 1477 AD by Sultan Al-Ashraf Sayf al-Din Qa'it Bay. The Qaitbay Citadel in Alexandria is considered one of the most important defensive strongholds, not only in Egypt, but also along the Mediterranean Sea coast. It was erected on the exact site of the famous Lighthouse of Alexandria, which was one of the Seven Wonders of the Ancient World. It formulated an important part of the fortification system of Alexandria in the 15th century AD.

The British fleet bombarded Alexandria violently on 11 July 1882 and damaged a large part of the city, especially in the area of the Citadel. This attack cracked the fortress, causing great damage. The north and western facades were severely damaged as a result of cannon explosions, aimed directly at the structure. The western facade was completely destroyed, leaving large gaps in it. Unfortunately, the Citadel then remained neglected, until 1904 when the Ministry of Defence restored the Upper floors. After the revolution of 1952 the Egyptian Naval troops turned the building to a Maritime Museum. The biggest restoration work dates back to 1984, when the Egyptian Antiquities Organization made ambitious plans to restore the fort.

Image Courtesy of Wikimedia and Delengar.
Sight description based on Wikipedia.
3

It was a tower built in the 3rd century BC on the island of Pharos in Alexandria, Egypt to serve as that port's landmark, and later, its lighthouse.
The Lighthouse of Alexandria, sometimes called the Pharos of Alexandria, was a lofty tower built by the Ptolemaic Kingdom between 280 and 247 BC with a 393-450 ft (120-137m) height. It was one of the tallest man-made structures on Earth for many centuries, and was regarded as one of the Seven Wonders of the Ancient World. Badly damaged by three earthquakes between 956 and 1323, it then became an abandoned ruin. It was the third longest surviving ancient wonder (after the Mausoleum at Halicarnassus and the still extant Great Pyramid of Giza) until in 1480 the last of its remnant stones were used to build the Citadel of Qaitbay on the site. In 1994, French archaeologists discovered some remains of the lighthouse on the floor of Alexandria's Eastern Harbour.
Image Courtesy of Flickr and Giorgio Montazeri.
Sight description based on Wikipedia.
4

Alexandria Aquarium was built in 1930 and is located near by Qaitbay fort on Eastern Harbor. The aquarium exhibits many species from the Mediterranean and Red Seas around Egypt, as well as some freshwater species from the Nile and the Amazon. Animals on display range from fish to crustaceans and turtles (both marine and freshwater). The Aquarium is also home to the Marine Research Institute.
Image Courtesy of Wikimedia and http://www.flickr.com/people/18587419@N03.
Sight description based on Wikipedia.
5

One of the most significant and marvelous mosques in the city of Alexandria, Abu El Abbas El Mursi, was built in 1775 by Algerians. The mosque was constructed over the tomb of Murcia Andalusanal-Abbas Saint. Abu el-Abbas el-Mursi Mosque is 23 meters high and has a wonderful minaret. It is located on the beautiful Mosque Square that overlooks the Eastern Harbour. The mosque can be seen clearly from the sea.
Image Courtesy of Wikimedia and Leonard J. DeFrancisci.
6

Anfushi Tombs consist of five tombs that date back to the third century BC. They are beautifully decorated with Egyptian graffiti and amazing pictures worth seeing. Anfushi Tombs showcase the blend of both Greek and Egyptian arts. The tombs were revealed in 1901 and 1921.
Image Courtesy of Flickr and Colin Hepburn.
7

Alexandria port consists of two harbours (East and West) separated by a T-shaped peninsula. Situated along the main part of the Mediterranean coast of Alexandria, the Eastern Harbour of Alexandria is a beautiful harbour and one of the most interesting attractions in Alexandria. The Eastern Harbour is shallow and not navigable by large vessels. It provides beautiful panoramic views of the Mediterranean Sea, especially in the evenings.
Image Courtesy of Flickr and bastique.
Sight description based on Wikipedia.
8

Roman amphitheaters are large, circular or oval open-air venues with raised seating – built by the Ancient Romans. Built in the IV century AD, Ancient Roman Amphitheater in Alexandria is an amazing work of art with a capacity of 800 seats. It was a place for wonderful musical performances and various contests. The Gladiator games were also held here. The theater was built with materials from all over the world. It features great surroundings, marvelous trees and plants.
Image Courtesy of Flickr and Argenberg.
Sight description based on Wikipedia.

Create Your Own Walk in Alexandria

Creating your own self-guided walk in Alexandria is easy and fun. Choose the city attractions that you want to see and a walk route map will be created just for you. You can even set your hotel as the start point of the walk.