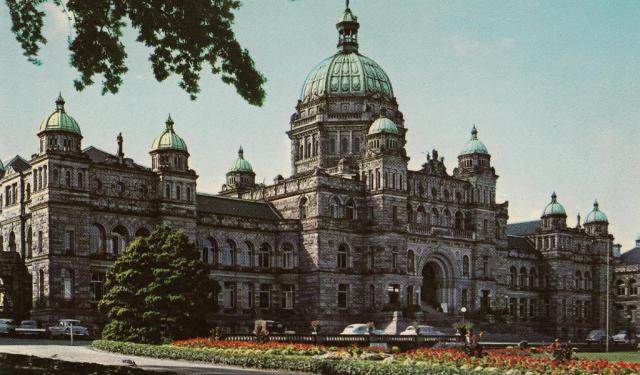 Victoria is among the most British of cities in North America. It is famous for its green areas and beautiful gardens and parks. There are some outstanding architectural structures that you can visit too. In the tour that follows, take a look at some of the most visited architectural sites in Victoria.
Image Courtesy of Wikimedia and Michal Klajban.
How it works: Download the app "GPSmyCity: Walks in 1K+ Cities" from iTunes App Store or Google Play to your mobile phone or tablet. The app turns your mobile device into a personal tour guide and its built-in GPS navigation functions guide you from one tour stop to next. The app works offline, so no data plan is needed when traveling abroad.

A National Historic Site of Canada, the Emily Carr House was the childhood home of Canadian painter Emily Carr and had a lasting impression on her paintings and writings.

The house passed through the Carr family for several years, before being sold to a private owner for use as a rental property. The building was extensively modernized following a fire in 1938. In 1964, MP David Groos saved the building from demolition and turned it over to the Emily Carr Foundation three years later, for use as an art gallery and school known as the Emily Carr Arts Centre. In 1976, the provincial government purchased the property and helped return the building to its original condition.

The building was extensively restored by two different architects, undoing many of the additions and modernizations that had been added to the house since the 19th century. It is currently an interpretive centre for Carr's art, writings and life.

Why You Should Visit:
Charming and very nostalgic place that definitely gives you a glimpse into history.
There are many of Carr's writings on display, together with some reproductions of her art.
The gardens are beautifully maintained and there's a small gift shop where good books about her life and her art are available.

Tip:
Along the way, you may see many fine examples of older Victorian and craftsman style homes, many of them with very nice gardens.


Image Courtesy of Flickr and Patricia Simpson.
Sight description based on Wikipedia.
2

The Neo-baroque buildings face north on Belleville street facing the Inner Harbour and diagonally across from The Empress Hotel. A statue of Queen Victoria stands on the front lawn as well a statue of a soldier to commemorate the province's World War I, World War II and Korean War dead. Atop the central dome is a gold-covered statue of Captain George Vancouver. Free guided tours of the facility are offered year-round.

Why You Should Visit:
The buildings and the surrounding garden knoll is spectacular, both at night and during the day.
Mesmerizing interior with mosaic tiles, painted ceilings, and stellar stain glass windows.
You're able to take a self-walking tour or a guided tour of portions of Parliament.

Tip:
Make sure you do the indoor tour, as well as the garden tour – both are free!
You can also sign in at the security desk and visit the basement restaurant which is frequented by all the politicians.

Helmcken House is a museum in Victoria, located in Thunderbird Park. It was built by Dr. John Sebastian Helmcken, the first doctor in Victoria, in 1852, a surgeon with the Hudson's Bay Company. It claims to be the oldest house in BC still standing at its original site. The building is preserved in its original state, including the interior and some household objects. Some interesting items on display include Helmcken's medical kit. It's open daily and your Royal BC Museum ticket gets you in.

Why You Should Visit:
Quick glimpse into the past that provides some additional insight and history in a different context than that of the Royal Museum.
Image Courtesy of Wikimedia and Hans-Jürgen Hübner.
4

Craigdarroch Castle is a historic, Victorian-era Scottish Baronial mansion that was designated a National Historic Site of Canada due to its landmark status in Victoria.

Craigdarroch Castle has 39 rooms and over 20,000 square feet (1,900 m2). It was constructed in the 1890s as a family residence for the wealthy coal baron Robert Dunsmuir and his wife Joan. Robert died in April 1889, more than a year before construction on the castle was completed. The initial architect of the castle, Warren Heywood Williams, also died before completion of the castle.

Craigdarroch Castle is believed to have cost as much as $500,000 when it was built. When originally constructed Craigdarroch stood in grounds comprising 27 acres (110,000 m2) of formal gardens in Victoria's Rockland neighbourhood. Upon the death of Robert Dunsmuir's widow, Joan, the Craigdarroch estate was sold to land speculator Griffith Hughes for $38,000 who subdivided the estate into buildings lots.

The Castle is currently owned by the Craigdarroch Castle Historical Museum Society, which is a private non-profit society and is open to the public. The castle is a tourist attraction and receives 150,000 visitors a year.

Why You Should Visit:
Very unique place for western Canada. There is a self-guided tour, but the young volunteers stationed around the various rooms are also very helpful.
If you enjoy anything exquisitely Victorian-era or are a fan of wooden craftsmanship then this is a must.

Tip:
To fully appreciate the castle, you will need to be fit enough to walk up the staircases (no elevator) to the different sections from the restored bedrooms to the upstairs ballroom.
Make sure you go to the top turret and admire the views!

Government House's 14.6 hectares (36 acres) property is a publicly accessible area tended by volunteers in the Friends of Government House Gardens Society, and are used frequently by the surrounding community, save for when security otherwise necessitates. The site is divided into numerous different zones according to plant life and/or garden style; for instance, the British Columbia native plant garden contains species unique to the province, and the Cottage Garden is arranged in an informal style with a mixture of ornamental and edible plants. There are also gardens to supply cut flowers, herbs, and an orchard with apple, plum, and quince trees; a rock garden tended by the Heather Society of Victoria; iris, lily, rhododendron, and rose gardens (including a formal Victorian rose garden based on the plan of that at Warwick Castle in England); and water features such as the fountain pond and the duck pond. There is also a unique 8.9 hectares (22 acres) Garry Oak ecosystem.

Why You Should Visit:
Beautiful place to stop on a walk through the lovely and historic neighborhood of Rockland.
There is a modest tea rom open in the summer months. Deer roam freely on the property.
On a clear day, from numerous vantage points, you can see the Olympic Mountains.

Tip:
The house tours are 2 hours long so be ready for that. The gardens are one of Victoria's favorite visitor spots because you can walk from Craidarroch to the gardens to the Ross Bay Cemetery and it only takes an hour or so, depending on how much time you spend in each spot.