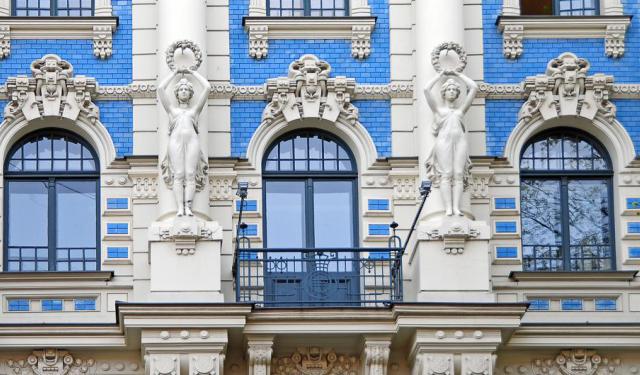 Image by Jorge Láscar on Flickr under Creative Commons License.

Riga has an extremely diverse cultural life. Locals enjoy attending the opera, classical music concerts, the theater and the cinema. Concerts are frequently held in churches, as is often the tradition in European cities. Take this self-guided tour to immerse yourself in Riga's enchanting culture.
How it works: Download the app "GPSmyCity: Walks in 1K+ Cities" from iTunes App Store or Google Play to your mobile phone or tablet. The app turns your mobile device into a personal tour guide and its built-in GPS navigation functions guide you from one tour stop to next. The app works offline, so no data plan is needed when traveling abroad.

The Latvian National Theatre is one of the oldest and most celebrated theatres in Latvia. It is housed in a 1902 building, designed by architect Augusts Reinbergs, which used to accommodate Riga's second Russian theatre, which was in operation until WWI. In 1918, Latvia proclaimed independence from the Russian Empire at the ceremony held inside the theatre's building, in which a year later the Latvian National Theatre was established. Initially, its troupe consisted mainly of actors from the Working Theatre, opened on February 23rd, 1919, and its repertoire included plays mostly by Jānis Akurāters, renowned Latvian writer.

Under the Soviets, the theatre was renamed The Drama Theatre and remained so until November 1988 when it regained the original name. Today, the Latvian National Theatre once again propagates Latvian art and culture. For almost a century it has done a great job upholding the art of drama in the country, and been known nationally for its efforts to bring on stage new talented actors and plays which would reflect the problems of contemporary Latvian society.

A visit to the Latvian National Theatre is like an excursion into the local history and culture.

Image by Xil on Wikimedia under Creative Commons License.
2

Mikhail Chekhov's Russian Theatre in Riga is the first Russian theatre in Latvia and the oldest one outside Russia. Established in 1883, it was the second theatre in Riga, after the German Theatre, and has enjoyed great reception since day one. People of different ethnicities have come to see its shows, and throughout 1902-1915 the theatre had flourished under the leadership of Konstantin Nezlobin. In 1915, the shows were suspended because of WWI, but in 1922 the theatre resumed operation, this time under the new regimen of the Latvian Republic. During that period, the theatre also enjoyed great success and its troupe travelled extensively throughout Europe. Berlin, Stockholm, Copenhagen and other European capitals eagerly anticipated to see the Russian drama. In 1940, after Latvia was annexed by the Soviet Union, the theatre was declared “national” property and forced to adhere to the ideological views of the Communist Party. Still, even then, the theatre largely succeeded in preserving its traditions and passed them onto the next generation of actors. After Latvia regained its independence in the early 1990s, the Russian Drama Theatre once again embarked on a new creativity quest. Although Russian is still the main language in the theatre, there have been more and more bilingual shows staged lately in both Russian and Latvian.

The theatre is open six days a week, Tuesday through Sunday.

Image by Nacho Lara on Flickr under Creative Commons License.
3

The history of opera and ballet in Riga started in 1782, when a German-speaking troupe was brought to entertain the local public with a new form of theatrical art for the first time. The very first attempt to establish in Latvia its own national opera was made in 1912, when Pāvuls Jurjāns opened the Latvian Opera House. Unfortunately, the outbreak of World War One led to the departure of Latvia's first opera singers to Russia. In 1918, Jāzeps Vītols revived the house and kept it running until the Soviet takeover of 1940, after which it was renamed the Latvian S.S.R. State Opera and Ballet Theatre and its repertoire was significantly affected by the Soviet ideology. In 1991, along with Latvia’s independence, the theatre regained its original name and artistic freedom.

The Latvian National Opera is housed in a 1863 building, designed by architect Ludwig Bohnstedt. It was fully renovated during 1990-1995 to provide best conditions for both performers and audience. A new annex, combining 19th century and today's architectural elements, was added to the building in 2001.

The Latvian National Opera is the home of Latvian opera, choir, orchestra and national ballet. The opera and ballet of Latvia have established themselves well on the international stage, and been particularly popular with the younger audience.
Image by DAVID HOLT on Flickr under Creative Commons License.
4

Forum Cinema is located in the Parex Plaza. This new cinema has fourteen theaters with a total of 3,200 seats. It may not be the largest cinema in Europe, but it has the biggest screens. Here you can catch one of fourteen Hollywood movies that play daily.
Image by RETROVIZION on Flickr under Creative Commons License.
5

The Latvian State Puppet Theater was founded in 1944. Since 1954 it has held performances for adults, as well as kids. The first adult play, "Devil's Mill", was staged by Tina Hercberga. In recent years, a successful partnership with the St. Petersburg Theater director Alexander Mindļinu has resulted in several puppet shows for adults, including "Carmen. Female Version", "Who of us are entangled?" and more. There are also a variety of shows for kids.
Image by Aris Jansons on Flickr under Creative Commons License.
6

Riga Cinema is located in a old building. The door leading to the theater's two auditoriums has many embellishments and is beautifully designed. The renovated hall has very good acoustics and most new blockbusters appear here earlier than in other countries. However, if you want to watch a European movie, there are many available.
Image by Christian Heutger under Creative Commons License.
7

The New Riga Theater is an innovative professional Latvian theater that was founded in 1992. The New Riga Theater (JRT) is located in the historic center of Riga, in the former building of the Daile Theater. This theater is extremely popular among young, non-conformist people.
Image by Blondinrikard Fröberg on Flickr under Creative Commons License.
8

Daile Theatre plays an important role on the Latvian cultural scene. Right upon its inauguration in 1920, the theatre took Riga’s cultural life by a storm. Much credit for its early success belongs to Eduards Smiļģis, an actor, art director and founder of the theatre. For over 33 years, he took charge of Daile’s repertoire, masterly combining classical and contemporary plays. At the time, in a bid to attract larger audience, Smiļģis also introduced musicals to the programme. In 1963, he was succeeded as the director by Pēteris Pētersons, who focused his attention on innovative performances and strongly exploited the idea of conflict between an actor and faceless crowd. Kārlis Auškāps, who led the theatre from 1987 until 1999, left a mark on its history as the one who encouraged the country's independence through theatrical performances.

Winner of multiple national and international awards, today's Daile has a strong reputation at home and abroad. It is particularly well known for its method of mixing traditional and innovative approaches. The Daile is one of the few theatres in Latvia that has maintained strong ties with the Latvian directors living and working in other countries.
Image by Manuel Palomino on Flickr under Creative Commons License.