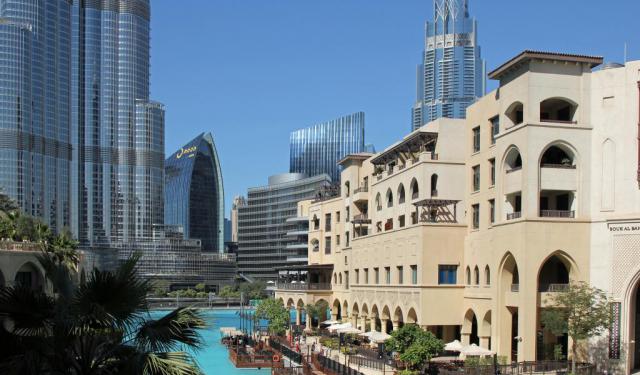 The ultra-modern city of Dubai did not always look the way it does now. For centuries, the city's economy relied heavily on the pearling and fishing industries. The Maktoum family, Dubai's current rulers, took over the reigns in 1883. The discovery of oil in 1966 set the change for a shift away from reliance on the marine industry.

Dubai joined the United Arab Emirates in 1971. However, at that time its oil reserves were low in comparison to the other UAE members. During the 1980s, Sheik Mohammed bin Rashid al-Maktoum, Dubai's crown prince, pursued free-trade policies that made the city prosperous. During the 2000s, Dubai became a financial hub for the Middle East and invested heavily in the tech industry. In recent years, it has also become a hot spot for tourists.

Heritage Village Dubai and Diving Village Dubai are two of the best ways to experience the city's history and culture. You wouldn't want to miss the other sights of interest, such as Khalifa Tower, The Dubai Frame, Dubai Miracle Garden, and the Naif, Perfume, Gold, and Spice Markets, either.

The Dubai Mall, Dubai Aquarium and Underwater Zoo are also worthy of your time and attention. Take this self-guided tour to explore the main sights of Dubai downtown and see what makes the visitors so excited about it.
Image Courtesy of Flickr and Eduard Marmet.
How it works: Download the app "GPSmyCity: Walks in 1K+ Cities" from iTunes App Store or Google Play to your mobile phone or tablet. The app turns your mobile device into a personal tour guide and its built-in GPS navigation functions guide you from one tour stop to next. The app works offline, so no data plan is needed when traveling abroad.

The Dubai Mall has the distinction of being one of the country's most popular attractions, attracting 80 million visitors yearly. There are over 1,300 retail stores that include Bloomingdale's and Galeries Lafayette. The mall has a reputation for being the Middle East's fashion capital. Designer brands are in abundance here, and traditional Arab clothing and jewelry include handcrafted designs.

This mall also boasts over 200 outlets offering food and beverages. Some of the most popular restaurants include Angelina for a luxurious French tearoom experience, Asma Restaurant for Middle Eastern food, and Tulum Mexican Restaurant for a mixture of cuisine types. Popular Western chains include Chilli's, Hardee's, and Joe's Crab Shack.

Fashion and food are not the only reasons to shop at this mall. Popular options for electronics include The Apple Store and Al Yousuf Robotics. Shoppers looking for cosmetics and fragrances will enjoy Ajmal Perfumes, Chanel Beauty Boutique, or Make Up for Ever. Home furnishing options include Bloomingdale's Home and Jashanmal Home Department Store. If you have kids you want to buy something for, try Ralph Lauren Kids or Candylicious.

The Dubai Aquarium & Underwater Zoo is within the mall. Other attractions include the VR Park that offers a unique virtual reality experience, and the child-focused KidZania. You can cool off by spending some time on the Dubai Ice Rink, which is Olympic-sized. Catch a feature film at the Reel Cinemas megaplex while you are here.

One of the top options in the Middle East for the finest upscale shopping in one convenient location.
Entertainment options that are perfect for all ages, from the latest movies to gaming.

The mall offers a free buggy service to help you get to and from your favorite stores much more quickly.


Image Courtesy of Wikimedia and Shahroozporia.
2

Dubai Aquarium and Underwater Zoo is host to thousands of marine animals that represent 140 species. One of the highlights of this aquarium is the population of over 400 rays and sharks. The 10 million liter tank provides abundant opportunities for visitors to interact with these animals as closely as possible.

The aquarium offers encounters with specific species that are worth your time. Some of the animals that visitors can "meet" include King and Queen Croc, a colony of Gentoo Penguins, an Asian Small-Clawed Otter family, and a feeding platform where visitors are welcome to feed and touch a group of 50 rays. Visitors are welcome to wade into a shallow tank to feed sharks under a trainer's supervision.

Glass bottom boat rides across the top of the tank offer an ideal view from above. You'll have the chance to see the various aquatic species as they go about their travels. The aquarium also has regular diving experiences in the tank, offering you another way to interact with the animals.

A tunnel spanning 48 meters offers a fascinating perspective from 11 meters under the water's surface. The tunnel provides an even closer view of the marine life than a boat ride, and seeing divers feeding the sharks and rays from this perspective is particularly exciting.

Meet with one of the Aquarium Educators for more information from an insider's perspective.

Souk Al Bahar is also known as "Sailor's Market," with a downtown Dubai location. This souk hosts over 100 retail stores and 22 restaurants and has a waterfront location with broad appeal to visitors. Tall archways and corridors of natural stone help give the market a distinctly Old World feel, along with traditional Arabian decor.

Some of the things that visitors to the souk can easily shop for include handcrafted local items such as carpets, tapestries, jewelry, and furnishings. Traditional clothing is popular here, as well as perfume. Visitors will also find merchants selling books.

The souk also hosts regular events that visitors will not want to miss if they get the opportunity. Some of these include theatrical experiences that appeal to opera lovers.

The Dubai Fountain is the largest performing fountain in the world. This fountain sits amid the Burj Khalifa Lake, a human-made lake in Dubai's downtown area. One of the things that stands out about this fountain is its design by the same company responsible for Las Vegas' Bellagio fountain.

Two arcs and five circles of varying sizes help give the fountain its design. Water sprays take place in different combinations and patterns, capable of spraying 83,000 liters of water into the air at any given time. There are 50 color projectors and over 6,600 lights that help create a stunning display.

The fountain's display is one of the most visible in the city, with the best views being available from the lake's promenade. There are two daytime displays, as well as performances every half hour during the evenings. The music that these displays are choreographed to includes traditional and contemporary Arabic music and world music.
Image Courtesy of Flickr and Tanya Hart.
5

For many years now Dubai has been looking for alternative income outside the oil business and has expanded into tourism. Many amazing skyscrapers have gone up and it is in the new Downtown Dubai area that you will find yourself at the foot of Burj Khalifa, the tallest building in the world.

This incredible tower is also incredibly beautiful, looking as if it has just stepped out of a Sci-Fi movie. It stands 829.84 meters high in a 27-acre park with 6 palm tree-lined paths, six water features, gardens, and flowering trees. In a country where water is scarce, this lovely park is kept flourishing by using the water created by the building’s condensation system.

The tower boasts 160 stories of residences, offices and other attractions, 46 stories of maintenance, broadcasting and communications areas and 2 underground parking lots. It’s enough to make you giddy just to stand on the ground looking up to the spire far away on the top!

The residences are luxury apartments and hotels. On the 76th floor there is a swimming pool, on the 122nd floor there is an excellent restaurant, on the 124th floor you can admire the panoramic city view from the observation deck; a nightclub is waiting to welcome you on the 144th floor and a mosque is to be found on the 158th floor.

The tower costed $1.5 billion to build. Dubai ran into debt during the world crisis and was bailed out by the UAE President Khalifa bin Zayed Al Nahyan. Hence, the tower was named in his honor instead of Burj Dubai as originally intended.

Tip:
Best reserve tickets online minimum 1-2 days in advance to jump the queue. There are several ticket options offered; with choosing the 2nd highest platform option you can save some serious money.
Image Courtesy of Flickr and HyunJae Park.
6

Sheikh Mohammed bin Rashid Boulevard is one of Dubai's most famous streets, forming a near-circle around Souk Al Bahar. This street is most well-known for hosting cafes and restaurants to suit virtually any taste.

Some of the chain restaurants that visitors might be familiar with include Arz Lebanon, Bennigan's, and Paul. Locally-owned selections that visitors are eager to try include Mayrig, an Armenian restaurant; Omnia by Silvena, a Middle Eastern restaurant with cuisine by Silvena Rowe; and The Pavilion, a cafe that is one of the trendiest spots in the area.

If you're looking for drinks, there are options to suit your style. Neos at The Address Downtown has a very upscale flair, coupled with stunning views. Stage2 at boutique hotel Vida has a lower-key atmosphere that includes drinks paired with cheese. Nezesaussi in Al Manzil hotel has a lively pub setting with a lot of live sports.
Image Courtesy of Wikimedia and Vikramjit Kakati.

Create Your Own Walk in Dubai

Creating your own self-guided walk in Dubai is easy and fun. Choose the city attractions that you want to see and a walk route map will be created just for you. You can even set your hotel as the start point of the walk.

Dubai's Old Quarter is one of the oldest residential areas in the city, with a predominantly South Asian population, restaurants and shops. Commonly referred to as Meena Bazaar by the local Pakistani and Indian community, the locality also encompasses the Al Bastakiya district which dates back to the 1800s. On this self-guided walking tour you will journey into Dubai's past, visiting the...  view more

Deira has been a Dubai commercial hub for years, home to the city’s oldest souks and a warren of narrow streets lined with outdoor cafés and traditional shops. Souks are traditional markets and they can be found on both sides of Dubai Creek.

The liveliest and most colorful are on the Deira side, and a tour of the souk adjacent to Deira Abra station is particularly rewarding. This is the...  view more