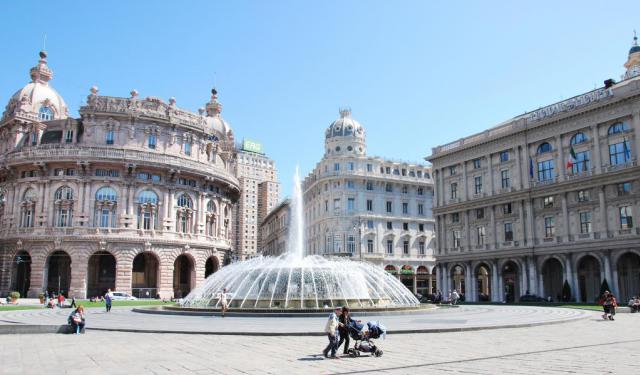 Image by Hpschaefer www.reserv-a-rt.de on Wikimedia under Creative Commons License.

The city of Genoa is rich in beautiful places and historic monuments dating from the 12th century until today. Eye-catching buildings, interesting architecture and cultural enrichment, unique museums and fine spots of interest are what you will see by following the route of this orientation walk.
How it works: Download the app "GPSmyCity: Walks in 1K+ Cities" from iTunes App Store or Google Play to your mobile phone or tablet. The app turns your mobile device into a personal tour guide and its built-in GPS navigation functions guide you from one tour stop to next. The app works offline, so no data plan is needed when traveling abroad.

The cathedral was founded probably in the 5th or 6th century AD, devoted to St. Sirus, bishop of Genoa. Excavations under the pavement and in the area in front of today's façade have brought to light walls and pavements of Roman age as well as pre-Christian sarcophagi, suggesting the existence of a cemetery in the site. Later a church devoted to the Twelve Apostles was built, which was in turn flanked and replaced by a new cathedral dedicated to St. Lawrence martyr, in Romanesque style. Money came from the successful enterprises of the Genoese fleets in the Crusades. The transferring of the cathedral favored the urbanization of the zone that, with the construction of its walls, in 1155, and the fusion of the three ancient city nuclei, became the heart of the city. The piazza, in absence of other public squares and centers of lay power, was the only public space in the city for the entire Middle Ages. Various altars and chapels have been erected between the 14th and 15th centuries.
Image by Kate Hopkins on Flickr under Creative Commons License.
Sight description based on wikipedia
2

The treasury museum is located in the San Lorenzo Cathedral. The Cathedral Treasury established a collection of objects in the twelfth century and expanded in later centuries through official grants and private contributions, also from war trophies. It became a museum in 1892, when it was decided to give this precious stable heritage, making it visible to the public at all times. After World War II, in the courtyard of the Archbishop's Palace behind the cathedral, an entirely new underground environment was developed, intended specifically to cater to the museum, which opened in 1956. The overall effect is fascinating, not only for the strength and novelty of conception, but also for the variety and complexity of cultural references and types.
Image by Alessio Sbarbaro on Wikimedia under Creative Commons License.
3

The Palazzo San Giorgio or Palace of St. George (also known as the Palazzo delle Compere di San Giorgio) is a palace in Genoa, Italy. It is situated in Piazza Caricamento. The palace was built in 1260 by Guglielmo Boccanegra, uncle of Simone Boccanegra, the first Doge of Genoa. For the construction of the new palace, materials were used from the demolition of the Venetian Embassy in Constantinople, obtained from Byzantine Emperor Michael VIII as a reward for Genoese aid against the Latin Empire. The palace was intended — through the creation of a civil-political center — to separate and elevate the temporal power of the republic's government from the religious power of the clergy centered on the Cathedral of San Lorenzo. In 1262, Guglielmo Boccanegra was deposed and forced into exile. The palace was used for some time as a prison; Marco Polo was its most famous resident and it was there that he dictated his memoirs to Rustichello of Pisa.
Image by Twice25 & Rinina25 on Wikimedia under Creative Commons License.
4

Palazzo Spinola was established as an edifice in 1593, upon the will of Francesco Grimaldi. It now houses, since 1958, Palazzo Spinola National Gallery. Here you can see pieces of art by well-known people of culture, some of them being Van Dyck, Rubens and Agostino. Superb paintings, historic furniture, frescoes and ceramic works can be admired in the gallery. Also, the bookstore on the ground floor makes it possible for you to acquire publications on The Palazzo Spinola National Gallery.
Image by Twice25 & Rinina25 on Wikimedia under Creative Commons License.
5

Palazzo Bianco (English: White Palace) is one of the main buildings of the center of Genoa, Italy. It is situated at 11, via Garibaldi (known at one time as Strada Nuova, and before that, Via Aurea). It contains the Gallery of the White Palace, one of the greater city art galleries, and together with those of its neighbors Palazzo Rosso and Palazzo Doria Tursi, it forms part of a cluster of museums at that end of the street. Constructed between 1530 and 1540 by Luca Grimaldi, a member of one of the most important Genoese families, in 1658 the palace passed into the possession of the De Franchi family, and in 1711 it was given by Federico De Franchi, its inheritor, to Maria Durazzo Brignole-Sale, his main creditor. The gallery offers a panorama of European painting from the 12th century to the 17th century, with a large prevalence of Genoese, Flemish, French and Spanish painters.
Image by Alessandro.photographer on Wikimedia under Creative Commons License.
Sight description based on wikipedia
6

Initially built around 1563 by architect Bernardino County on behalf of John the Baptist and Andrew Spinola, of the powerful family of Spinola, Palazzo Doria looks like a solid cube without any external decoration. The building underwent radical changes, building up a second floor, due to centuries of property transition of the Doria family, the lords and marquis of Montaldeo. Severely damaged during bombing in the war with France, its facade was further revised and completed, as well as enriched with stucco and pairs of pilasters at intervals. Inside, of considerable value are the eighteenth-century rococo stucco, precious furniture and room on the floor and the vault frescoes by Luca Cambiaso with the Fall of Phaeton and the Fall of Icarus. It is located at 6 Via Garibaldi.
Image by Twice25 & Rinina25 on Wikimedia under Creative Commons License.
7

The Edoardo Chiossone Museum of Oriental Art in Genoa is an important collection of Asian art, one of the most significative collections in Europe and in Italy, along with museums of Venice and Rome. The museum possesses a huge collection (over 15,000 pieces) of Edoardo Chiossone, who spent 23 years (1875-1898) in Japan. The exhibition shows many objects and artworks from Japan and China, like sculptures, porcelain pieces, bronze vessels, prints, masks, Samurai armours and helmets. It is situated inside Villetta Di Negro, a public park in the centre of Genoa, next to Piazza Corvetto and overlooking the historical centre and Via Garibaldi.
Image by Sailko on Wikimedia under Creative Commons License.
Sight description based on wikipedia
8

The historical palace of the New Stock Exchange Genoa, built in 1912, with its curved facade, faces the center of Piazza De Ferrari. The building occupies an area of over 3000 square meters. Designed by Dario Carbone, it is a monumental, arched pillared porch. By now the Stock Exchange housed several offices and activities and represented a highly significant example of the artistic and architectural heritage of the city and its business life.
Image by William Domenichini on Wikimedia under Creative Commons License.
10

The home of Christopher Columbus in Genoa is the building in which young Cristofor Columb lived, the most famous Genoese navigator. Today a historical museum complex of the city, the building has undergone many changes over the centuries, the main one being due to the bombardment of Genoa in 1684.
Image by Phil Tizzani on Wikimedia under Creative Commons License.
11

Genova is famous for the longest wall in Europe, with historical stretches dating back from the 12th-17th centuries. Unique mix of different designs both old and recent makes it more attractive to the eye. Used as a protection barrier, Murra della cita knows and keeps the oldest secrets of the city.
Image by Flavio Ferrari on Wikimedia under Creative Commons License.
12

Sant'Agostino is a church in the historical center of Genoa, northern Italy. It is today deconsecrated, sometimes used for representations of nearby Teatro della Tosse. Begun by the Augustinians in 1260, it is one of the few Gothic buildings remaining in the city, after numerous demolitions in the 19th century. It has a typical façade with bichrome stripes in white marble and blue stone, with a large rose window in the middle. Notable is the ogival portal with, in the lunette, a fresco depicting St. Augustine by Giovanni Battista Merano. At the sides are two double-mullioned windows. The interior has a nave and two aisles divided by ogival arches supported by robust columns with cubic capitals. The church has also two cloister now included into a museum.
Image by Davide Papalini on Wikimedia under Creative Commons License.
Sight description based on wikipedia
13

The Palace of the Doges (Italian: "Palazzo Ducale") is a historical building in Genoa, northern Italy. Once the home of the Doges of Genos, it is now a museum and a centre for cultural events and art exhibitions. It is situated in the heart of the city, with two different entrances and facades, the main one on Piazza Matteotti, and the second one on Piazza De Ferrari. The first parts of the Palace were built between 1251 and 1275, during the flourishing period of the Republican history of Genoa, while the Torre Grimaldina (also named "Torre del Popolo" - Tower of the People) was completed in 1539. The Palace of the Doges was restored in 1992, on the occasion of the celebrations of Christopher Columbus and the 500th anniversary of the discovery of America. On the main floor, the so called Piano Nobile, are the frescoed halls of the Maggior and Minor Consiglio, where many public events take place.
Image by Rinina25 & Twice25 on Wikimedia under Creative Commons License.
Sight description based on wikipedia