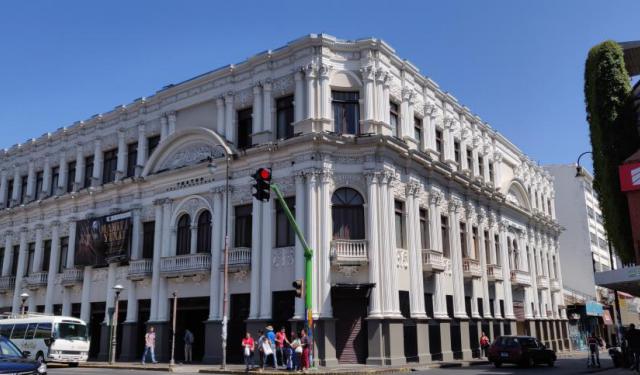 The historic architecture of San Jose is a mix of European and Latin American styles with buildings dating back mostly to the end of the 19th – beginning of the 20th centuries. Just as imposing today as they were 100 years ago, these former benchmarks of good taste and prosperity, having survived numerous demolitions and works carried out in the heart of the capital over time, continue silently observing the ongoing history of San José amid its daily hustle and bustle.

Central Post Office – a monumental, elegant structure of an eclectic style and notable French influence, built between 1914 and 1917. Metropolitan Cathedral – originally mud-and-straw, this 18th-century church eventually took the shape of a concrete edifice with Salomonic columns that had survived numerous earthquakes prior to being remodeled and converted into the Metropolitan Cathedral it is today.

Teatro Popular Melico Salazar – completed in 1928; was renamed in the 1980s to honor Manuel “Melico” Salazar, one of the most recognized Costa Rican opera stars. Grand Hotel Costa Rica – one of the most distinguished hotels in San Jose, built in 1928-1930; many famous international guests traveling to Costa Rica have stayed here. The National Theater – built from 1890 to 1897; an ambitious project funded by local coffee oligarchs. Lavishly adorned with sculptures and paintings by renowned Italian artists.

For a closer look at these and other prominent monuments of historic architecture in San Jose, take this self-guided walking tour.
Image Courtesy of Wikimedia and Rodtico21.
How it works: Download the app "GPSmyCity: Walks in 1K+ Cities" from iTunes App Store or Google Play to your mobile phone or tablet. The app turns your mobile device into a personal tour guide and its built-in GPS navigation functions guide you from one tour stop to next. The app works offline, so no data plan is needed when traveling abroad.

The Correo Central is the old historic Central Post Office of San Jose, Costa Rica. The neat thing is that it is still in full operation today. It was first opened in 1917, though the overall architectural design of the building would suggest that it is much older.

On the first floor of the building there is a Stamp Museum that is pretty neat, especially seeing as how the hobby of stamp collecting is very popular in the country. You can get classic examples from the history of the country here. Plus, how often do you see a stamp museum in an operating post office? The area is open Monday through Friday from 7:00 a.m. until 9:00 p.m. It is also open 8:00 a.m. until noon on Saturdays. Admission to the museum is free, since it is part of the post office.

There is a small park that is located right next to the building, which is a great spot to stop and rest. Some of the most beautiful fig trees in the country are located here, and provide a peaceful resting place for the wearing traveler.

The Metropolitan Cathedral of San Jose was built in 1802 and has been the seat of the Catholic people of the city since. Sadly, in the early 1800s, the location was damaged by an earthquake. In 1871, it was rebuilt into the current structure that stands today.

The new center of worship combines Greek Orthodox, Neo-Classical, and Baroque styles of architecture together in a way that honors the old and new portions of the church. The Doric style pilasters and neo-classical pediment with steeples located on the side of the building are a fine example of how that melding of architectural styles happened.

You will want to pay a visit to the inside of this church also. The finely tiled Colonial floors and stainless windows are quite lovely. Various biblical themes adorn the windows. You will also want to check out the wooden Cherubs and figure of Christ at the altar.

In 1983, the church received a special visit from Pope John Paul II. You will be able to see a marble statue of him standing guard over the garden on the building's north side. Two former archbishops, as well as a Costa Rican President are buried in the basement of the building.

Tip:
Although not technically part of the cathedral complex, a small statue of Holocaust victim Anne Frank graces the pedestrian mall on the building's south side. It was donated by the Embassy of the Netherlands.

A more lavish style gallery was added to the building in 1960, but it sadly burned in a fire just seven years later. For the next ten years, the location would not do well. It would take until 1985 for the old theater to really get back on its feet again. In that year, the government passed a law declaring the theater a “cultural institution especializada.” In that year, the theater was given its current name to honor Manuel Melico Salazar.
Image Courtesy of Flickr and Ernesto Otretga.
Sight description based on Wikipedia.
4

The Grand Hotel of Costa Rica is a true gem among the hotels of San Jose, Costa Rica, and it also happens to be the very first such hotel in the country. It was formed in 1928, and up till that time, there was no major first class hotel in the capital city. An act of the Constitutional Congress of the Republic of that year made it possible to get the hotel in town. The hotel got funding from the government, and in turn the hotel agreed to always sell Costa Rican coffee, as well as the hotel agreed to always keep two rooms available for the government to use for dignitaries and the like.

In 2004, President Abel Pacheco declared the hotel to be a national landmark of the country. The architecture of the place is also quite wonderful, expressing the best in Victorian style architecture. In recent times, the Choice International Hotel chain has acquired the hotel, and added it to its growing list of historic hotels that are being turned into Resorts. It remains a popular destination in the capital city not only because of its historicity, but because it also sits very close to the ocean and some of the best mountain side landscaping in the country.

On December 7th, 2004, the Gran Hotel Costa Rica was declared by the President of the country Abel Pacheco a historical-architectural landmark of Costa Rica, not only for being the first major hotel of the country, but also for its long trajectory, its architecture, which represents the San José of those years, and the historical complex it forms with other landmarks in the area.
Image Courtesy of Flickr and fkz199.
5

The construction of the National Theater building started in 1891 and the first theatrical presentation took place in October of 1897, when Wolfgang von Goethe’s “Faust” debuted to the delight of the crowd there.

The glory days of the theater came during the time when coffee exports for the country were at their best. There were many good patrons of the arts, and the quality of the performers was at its best. At one point, there was also a tax on coffee dedicated to the arts. That kind of free-flowing money also shows in the design of the building which is well known for lavish furnishings and a beautiful, rich looking interior that was designed to rival the great theaters in Europe.

In the front of the theater is a statue of Calderon de la Barca and Ludwig van Beethoven, which are worth taking a moment to check out. The same statues are featured on the country's currency. The theater performs several times a week.

Tip:
If you have a ticket for a performance, ask for the free English tour included in the ticket price to learn a bit of history about the place. Otherwise you can purchase a paid tour to see the play.

The Edificio Metálico (The Metalic Building) is a marvelous piece of architecture located next to the Morazan Parque. The Metallic Building was made in Belgium and then transported and assembled in San Jose in 1896. This kind of architecture is unique in Costa Rica and is said to have been inspired by the Eiffel Tower.

Why You Should Visit:
One of the most eye-catching school buildings you'll see, and one of the reference points of the city center.