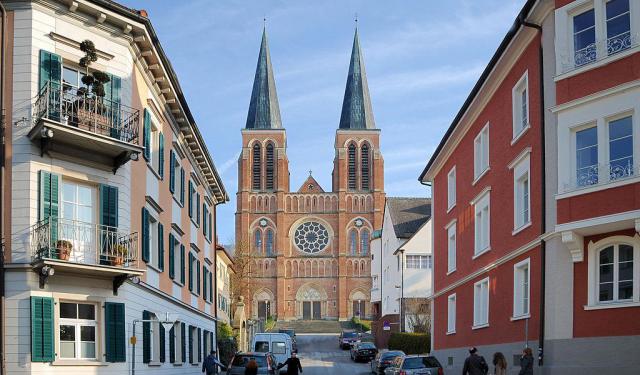 Bregenz is home to many historic buildings, several of which were built between the 13th and 16th centuries. Federal High School, the Vorarlberg Land Theater and City Hall, located near the harbor, are landmarks of the Lower Town. Take the following tour to discover Bregenz’s best historic architecture.
Image Courtesy of Wikimedia and böhringer friedrich.
How it works: Download the app "GPSmyCity: Walks in 1K+ Cities" from iTunes App Store or Google Play to your mobile phone or tablet. The app turns your mobile device into a personal tour guide and its built-in GPS navigation functions guide you from one tour stop to next. The app works offline, so no data plan is needed when traveling abroad.

The Vorarlberg Land Theater, located on a site formerly used for trading grain, was built in the 1840s. After restorations, in 1955 the Vorarlberg Theatre, founded in 1946, moved into the building. This theater has a season full of performances and also hosts events during the summer.
Image Courtesy of Wikimedia and Andreas Praefcke.
2

City Hall, located on Rathausstrasse in the Lower Town, was built to store grain in 1686 and has been used for local government since 1810. Its facade was reconstructed in 1898, on the occasion of Franz Josef’s semi-centenary regency, in the late Renaissance style. The concrete exterior is topped with bright green copper domes.
Image Courtesy of Wikimedia and Andreas Praefcke.
3

The small 16th century Deuring Castle, located in southwestern Bregenz, now serves as a hotel and gourmet restaurant. The present structure was developed based on the former medieval construction. Belonging to the von Deuring family in the late 1600s, the surviving brickwork was turned into a wonderful Baroque complex. Restored in 1989, this historic architecture preserves the local culture.
Image Courtesy of Wikimedia and Andreas Praefcke.
4

The Old Town Hall, located on Eponastrasse near Deuring Castle and St. Martin’s Tower, is a rather eye-catching house to passersby. This large yellow A-frame timber house dating back to the 17th century has an impressive gable roof with red and white shutters. It now serves as a private residence.
Image Courtesy of Wikimedia and böhringer friedrich.
5

The first chapel of Thalbach priory dates back to 1436. In 1575 it became a monastery. Some of the monastery’s latest structures were built from 1609 to 1677 in the early Baroque style. In 1592 the precious image of the Blessed Virgin, "Sedes Sapientiae," was gifted to it. This late 13th century statue is one of the most significant works in the Bodensee area. It also has frescoes and wooden sculptures of saints. Formerly a home for Dominican nuns, today it serves as a school and hosts the Catholic Women’s Organization.
Image Courtesy of Wikimedia and Andreas Praefcke.
6

Federal High School, on Gallusstrasse, is Bregenz’s linguistic high school. In 1878 the Dominican monastery founded a private convent school, predecessor to the current Bundesgymnasium. In 1935 it was the Women’s Liceum and High School and a school for boys in 1944. In 1982 it became a school for language studies. The current building, established in 1913, is an example of Schwabach Rural architecture. It also has a weather station on its roof which reports meteorological data for Vorarlberg.
Image Courtesy of Wikimedia and böhringer friedrich.
7

The Vorarlberg State Library inherited the former convent of the Benedictines at the base of Gebhardsberg Mountain. Founded in 1904 as a branch of the Vorarlberg Land Archive, in 1977 it was named the Vorarlberg Land Library, an information center providing documentation, communication and coordination for regional education. Its dome is a copy of the one at St. Peter’s Cathedral in Rome. It possesses a well-preserved 1616 copy of "Emser Chronik," a masterpiece of printing, which is considered the most beautiful book printed in Vorarlberg.
Image Courtesy of Wikimedia and böhringer friedrich.
8

The Evangelist Church, located in the center of the city on the site of a former Roman settlement, was built in 1864. Designed by architect Carl Leins in the Neo-Gothic style, it has the nave with an integrated transept under the gabled roof and a tower on the north side. It has a wooden framework and inside you will find a monument to fallen soldiers, with a stone rood created by Albert Bechtold in 1923. Roman artifacts which became the basis of the Vorarlberg Land Museum’s collection were found here while the church's foundation was being laid.
Image Courtesy of Wikimedia and böhringer friedrich.
9

Located on the outskirts of Bregenz, it is believed that the first monastery erected on this site was built by St. Columbanus in the 7th century. During the 11th century it was completely rebuilt, and after the Thirty Years War as well. This Roman Catholic monastery was closed at the beginning of the 19th century and many of its buildings were sold at auction. In 1859 a Neo-Romanesque church was built. The Mehrerau Monastery is still owned by the Cistercian Order, housing a boarding school, sanatorium, farm and Klosterkeller restaurant.
Image Courtesy of Wikimedia and böhringer friedrich.

Create Your Own Walk in Bregenz

Creating your own self-guided walk in Bregenz is easy and fun. Choose the city attractions that you want to see and a walk route map will be created just for you. You can even set your hotel as the start point of the walk.

Bregenz, located where Austria meets Germany and Switzerland, contains many beautiful landmarks in both the historic and modern parts of the city. Discover Bregenz’s most popular attractions and learn about its history in the following orientation walk.