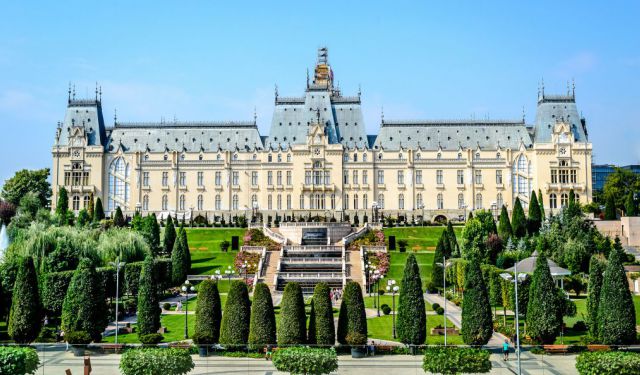 The city of Iasi – second largest in Romania after the national capital Bucharest – is quite often, and deservedly so, referred to as the "cultural capital" of the country. Located in the vast eastern region of Moldova, around which Romania, as a unified kingdom, was formed in the mid 19th century, it was indeed once the capital of it. Renowned for its cultural heritage, Iasi is also home to the country's oldest university, and has long been regarded as the center of Romania's social and artistic life. Attesting to this claim are a number of local attractions featured in this guide. So, take a walk and discover Iasi as it is today!
Image Courtesy of Flickr and Andrei-Daniel Nicolae.
How it works: Download the app "GPSmyCity: Walks in 1K+ Cities" from iTunes App Store or Google Play to your mobile phone or tablet. The app turns your mobile device into a personal tour guide and its built-in GPS navigation functions guide you from one tour stop to next. The app works offline, so no data plan is needed when traveling abroad.

1) Palace of Culture (must see)

The Palace of Culture is a spacious (299 rooms/36,000 m²) architectural landmark, symbol of Iasi and a listed national monument. It was built between 1906 and 1925 (the construction was somewhat halted by WWI) by prominent Romanian architect I.D. Berindei partially on the ruins of medieval princely court and a 19th century royal palace. In front of the building stands a mounted statue of Stephan the Great, medieval ruler of the Principality of Moldavia. During World War II the palace served as barracks sheltering first the German and then the Soviet troops. During the communist era, all the interior frescoes featuring Romanian monarchs were painted over. Until 1955, the building had served as the County Court of Law. Today, the flamboyant Neo-Gothic palace houses four museums (The Moldavian History Museum, The Moldavian Museum of Ethnography, The Museum of Art, and The Museum of Science and Technology), several art galleries and a huge public library.
Image Courtesy of Jim Zhu.
2

Palas Mall is a vast shopping center in the Civic Centre district of Iasi, part of a huge lifestyle center, comprising more than 270,000 square meters of commercial space. It is located not far from the landmark Palace of Culture.
Image Courtesy of Jim Zhu.
3

The Dosoftei House is a 17th century building named after the religious ruler of Moldavia (region of Romania) Metropolitan Dosoftei who in 1679 established here a print house (second in the region). The building underwent restoration in 1966-1969 and, since 1970, has been housing the Department of Old Romanian Literature of The Romanian Literature Museum, storing a collection of old and rare manuscripts, including the Romanian Book of Teaching, Bible of Buchares, and others.
Image Courtesy of Jim Zhu.
4

Situated in the old centre of Iasi, on Stefan cel Mare Boulevard (previously known as the Princely Street), the Monastery of the Three Holy Hierarchs symbolizes cultural and spiritual legacy of the Moldavia region of Romania. It was built in 1637-1639 by Vasile Lupu, prince of Moldavia, as a manifestation of his sovereignty, and remains under the patronage of Three Holy Hierarchs - St. Basil the Great, St. Gregory the Theologian and St. John Chrysostom. The "Trisfetite" Church, inside the monastery, was initially intended as a royal burial ground, pursuant to which it holds the remains of the local saint, Paraskeve, and prominent state persons, members of Vasile Lupu's royal family: Princes Dimitrie Cantemir and Alexandru Ioan Cuza. At some point, the monastery also housed a print house and the future Princely Academy known as "Schola Basiliana". In 1970 the monastery was shut down and remained so until 1989 when it was reopened. The complex's architecture represents a combination of Romanian, Turkish, Arab, Georgian, Armenian and Persian elements.
Image Courtesy of Jim Zhu.
5

Stefan cel Mare Boulevard is a pedestrian street in Iasi named after the region's medieval ruler and national hero, Stefan cel Mare; it has retained much of its historic cobble-stone appearance and continues to lure people in their thousands for a casual stroll from the Palace of Culture to Palas Mall, or to Piata Unirii and nearby Hotels Grand Traian and Unirea. Alongside these attractions, the Boulevard also houses the Iasi City Hall and the Metropolitan Cathedral, let alone numerous shops and boutiques. Just off Stefan cel Mare is the National Theatre.
Image Courtesy of Wikimedia and Cezar Suceveanu.
6

The Saint Mary Cathedral of Iasi is a Catholic temple first built in 1753 entirely of wood to replace the old church that stood in this place before. In 1782-1789 it was rebuilt in bricks. Following the 1802 earthquake and then the fire of 1827, the building underwent further changes, followed by renovations of 1861, seeing extensions made and the interior repainted by Italian artist Giuseppe Carta from Palermo. Also, during that time, white marble altars and via crucis icons were installed. Today, the cathedral represents a modern-looking church of circular design with a central tower culminating in a cross.
Image Courtesy of Jim Zhu.
7

The Iași Metropolitan Cathedral is the seat of the Romanian Orthodox Archbishop of Iaşi and Metropolitan of Moldavia and Bukovina, and is the largest Orthodox temple in Romania. It is built on the site of two churches dating back to the 15th and 17th centuries, and was opened in April 1887 in the presence of King Carol I. The architecture is inspired by the late Italian Renaissance and abounds in Baroque elements. The interior is adorned with paintings by Gheorghe Tatarescu, showing influence of Italian neoclassicism. The building is listed in the National Register of Historic Monuments.
Image Courtesy of Wikimedia and Argenna.
Sight description based on Wikipedia.
8

Roset-Roznovanu Palace (Romanian: Palatul Roset-Roznovanu) dates back to the second half of the 18th century. Throughout 1830-1833 it was rebuilt by Iordache Ruset-Roznovanu, member of the Rosetti princely family (rulers of the Moldavia province). During World War I, the palace was the seat of the Romanian government. Today it houses the Iași City Hall and is a listed National Historic Monument.
Image Courtesy of Wikimedia and Cezar Suceveanu.
9

The Iași National Theatre is the oldest national theatre and one of the most commercially successful in Romania, operational since May 1840. In February 1888, the original theatre building completely burned down. The restoration took two years (1894-1896), and was run by Viennese architects, Fellner and Helmer. The result was a combination of Neoclassic exterior and lavishly decorated interior, featuring a mixture of Rococo and Baroque styles, earning the building the status of one of the most elegant in Romania. In 1956, marking the 140th anniversary of the first theatrical performance in the Romanian language, the theater was named after of Romania's prominent playwright and poet Vasile Alecsandri. Today, this is a listed National Historic Monument and also home to the Romanian National Iasi Opera.
Image Courtesy of Jim Zhu.
10

Piața Unirii (Unification or Union Square) is one of the key gathering spots in Iasi much loved by the local youth and, in some cases, even protesters, owing to whom it sees a lot of action on a regular basis.. The square flanks Stefan cel Mare Boulevard on one end (with the Palace of Culture and Palas Mall flanking it on the opposite end) and is sided by two hotels: Grand Traian Hotel and Unirea Hotel.
Image Courtesy of Wikimedia and Argenna.
11

The Muzeul Unirii (Museum of Unification) is housed in a small, neoclassical palace built in the early 19th century. Between 1859 and 1862, it served as the royal residence of Alexandru Ioan Cuza, ruling prince who united the Romanian Principalities into a single state in 1859. Later on, during World War I, in 1917-1918, the palace also accommodated King Ferdinand during his retreat from Bucharest. The actual museum opened in 1959 marking the centenary of the Romanian state. The museum collection includes historic documents and original artifacts of Prince Alexandru Ioan Cuza and his family.
Image Courtesy of Jim Zhu.
12

Alexandru Lapusneanu Street is a historic street in Iasi, now made fully pedestrian. During WWI it was a lane leading to the royal palace of King Ferdinand, which prior to that, in 1859-1862, was the residence of Alexandru Ioan Cuza, Prince of Moldavia and Wallachia and, subsequently, Ruler of the Romanian Principalities. The street also houses the historic Grand Traian Hotel and one of the first movie theaters in the city, complete with a number of shops, bookstores, cafes and eateries, as well as an antique store. On the opposite end of the street is the campus of Ioan Cuza University.
Image Courtesy of Wikimedia and ElenaCozma.

One Day Walking Tour of Iasi: Glimpse into The Romanian History

The university city of Iași is quite often, and deservedly so, referred to as the "cultulral capital" of Romania. Located in the eastern part of the country, it was indeed once capital of the vast Moldavia region around which the unified kingdom of Romania was eventually formed in the mid...