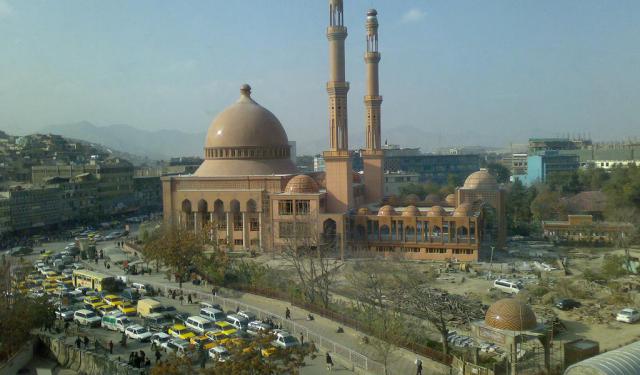 Set in a valley one mile above sea level, surrounded by mountains, Kabul, the capital and the largest city of Afghanistan, has been around for over 3,500 years, seeing many conquerors wanting to establish their presence in this valley due to its strategic location between Southern and Central Asia. Despite the ongoing military conflict in the country, today's Kabul is the fifth fastest growing city in the world with a multi-ethnic, multi-cultural and multi-lingual population of over 3 million. This Orientation Walk will guide you through the sites of the city that are still in good condition or have been restored lately, and are within a walking distance from each other. Please keep in mind that Kabul is still a war zone, and any visit to this city should be meticulously planned and effected with extreme caution.
Image Courtesy of Wikimedia and Masoud Akbari.
How it works: Download the app "GPSmyCity: Walks in 1K+ Cities" from iTunes App Store or Google Play to your mobile phone or tablet. The app turns your mobile device into a personal tour guide and its built-in GPS navigation functions guide you from one tour stop to next. The app works offline, so no data plan is needed when traveling abroad.

Located in one of the wealthiest areas of Kabul, Id Gah Mosque is the second largest mosque in the city. ‘Id Gah’ is translated as ‘prayer ground’. This mosque has hosted many religious ceremonies and festivals attended by Kings and Amirs. The historic announcement of Afghanistan’s independence was made here, in 1919. Mughal ruler Babur ordered the construction of Id Gah Mosque and had Persian architects build it with precious stone from the provinces Punjab and Sindh. The mosque’s architecture reflects the rich Muslim heritage. The building was painted in cream and white colors. It has four minarets at the front and four in the back, and one smaller minaret in the center of the roof, and many archways along the building. One feature that is more unique to the architecture of this mosque is its very long and narrow layout. There is a vast courtyard in front of the mosque, the Eid Gah Square, where a great number of Islam followers gather during the prayer season.
Image Courtesy of Wikimedia and KevinScottNL.
Sight description based on Wikipedia.
2

This is the largest mosque in Kabul and is located in the old downtown area of the city. It was built at the end of the 18th century and has been renovated and restored several times. Pul-e-Khishti Mosque is easily identified by its large blue dome. The current design of the mosque is a mix of international modern style with accents of traditional Afghan tiling.
Image Courtesy of Wikimedia and Casimiri.
Sight description based on Wikipedia.
3

The mausoleum is an octagonal structure with a large outer dome built on a tall drum above an inside dome, designed in the Moghul and Afghan kings’ style. Since it was restored in 2012, the building serves as an important cultural and educational facility where various lectures, seminars and exhibitions take place. The park area by the Mausoleum is planted with mulberry trees.

Image Courtesy of Flickr and Justin Lau.
Sight description based on Wikipedia.
4

The Mosque of the King of Two Swords, or thus the name of the mosque is translated, is a two-story yellow building, situated on the banks of the Kabul River. It was constructed in the 1920s during the reign of Amanullah Khan, whose rule was marked by dramatic political and social change in trying to modernize Afghanistan. The design of this mosque is quite unusual for Islamic religious architecture. Its Italian decorative stucco creates an interesting effect that some describe as ‘Afghan Baroque’. Next to Sah-Do Shamshira Mosque there is the burial place of an Arab commander who fell in battle when the Arabs entered Kabul at the end of the 7th century. He fought heroically with a sword in each hand and it is his name that is honored by this mosque today.
Image Courtesy of Wikimedia and Michal Hvorecky.
Sight description based on Wikipedia.
5

5) National Gallery of Kabul (must see)

The National Gallery of Kabul is the home of a great collection of historic pictures and paintings by Afghan artists of the 20th century. The National Gallery and other cultural institutions in the city have suffered from Taliban knife attacks, but many works were preserved, over-painted and restored. Over 120 paintings of the National Gallery were saved to prove that a nation stays alive as long as its culture is alive.
Image Courtesy of Wikimedia and Michal Hvorecky.
6

Abdur Rahman Khan was Emir of Afghanistan between 1880 and 1901. He was a strong ruler and gained the name of the ‘Iron Amir’. His tomb sits in the Mausoleum in Zarnegar Park (translated as the park adorned with gold). This building used to be a palace that later was converted to a mausoleum for the Amir. There is a beautiful red dome atop of the mausoleum that sits on a whitewashed drum. Across from the park you’ll see the Abdul Rahman Mosque. It is not to be confused, the benefactor of the mosque has no relation to the Iron Amir.
Image Courtesy of Wikimedia and Casimiri.
Sight description based on Wikipedia.
7

Abdul Rahman Mosque is one of the most recently constructed mosques in Afghanistan. It was privately financed by a well-known and respected entrepreneur, Haji Abdul Rahman, after whom the mosque was subsequently named. It was his lifelong dream and last wish to build a mosque. He lived to see the works begin, but passed away in 2002. The mosque bearing his name was opened for religious services 10 years later, a couple of weeks before the month of Ramadan. Ghulam Farooq, a renowned and very talented Afghan engineer, worked on the design of the building. The mosque has three prayer halls on different floors, a big learning center and an open terrace, and can serve up to 10,000 people at a time. The mosque features 20 domes, each having a hand-made brass chandelier with hundreds of light bulbs illuminating the rooms. The largest dome is above the main prayer hall. It is majestic and has a golden finish on the exterior, 44 arched windows around it, and Quran verses in elegant Islamic lettering decorating its interior. Abdul Rahman Mosque is a stunning work of art and a definite must-see.
Image Courtesy of Haseebullah Khan.
8

At the end of the 19th century, Abdur Rahman Khan built a palace for his son. Today that structure is home to Afghanistan’s National Archive. There are over 15,000 documents in the Archives that include newspapers, photographs, old currency, and various Quran books from the Durrani period. Many important documents (originals or copies) are displayed for visitors to see. Among them you will see the treaty signed with the British Empire in 1919 that was giving Afghanistan complete independence. There is another important letter, dating the 14th century, which was written by Timur. Visitors will appreciate both the contents of the Archives as well as the interior design of the building with its beautiful painted ceiling and carved woodwork.
Image Courtesy of Flickr and Gul Rahman.