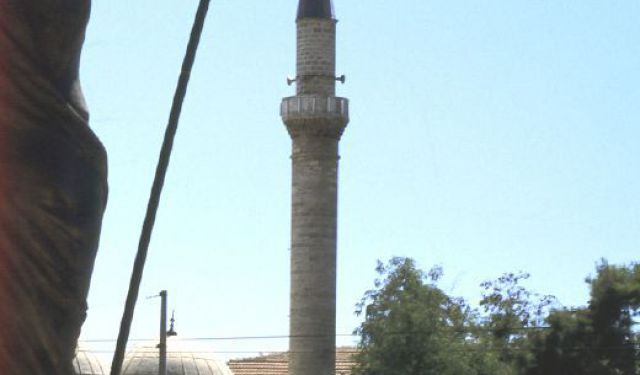 Visitors will always find many things to see and do in Kaleiçi or Old Town Antalya. Among the most visited are Hidirlik Tower, Hadrian's Gate, Clock Tower, Yivli Minare Mosque, Club Ally and much more. This is a historic area you must visit during your journey to Antalya. Among the above mentioned attractions you will see nice little houses, beautiful narrow and large streets. This is a list of attractions that are popular among tourists and Antalya’s friendly locals:
Image Courtesy of Flickr and Rainbow Demon.
How it works: Download the app "GPSmyCity: Walks in 1K+ Cities" from iTunes App Store or Google Play to your mobile phone or tablet. The app turns your mobile device into a personal tour guide and its built-in GPS navigation functions guide you from one tour stop to next. The app works offline, so no data plan is needed when traveling abroad.

The Atatürk Monument and Republic Square are among Antalya's most famous landmarks. This monument is also known as the National Ascension Monument. The monument and the square celebrate Atatürk's rise to power. Under his leadership, the Turkish Republic came into being, making it one of the first countries in this region to boast a republican form of government.

The monument features bronze handiwork and was created in 1964. Figures featured at the top include Ataturk mounted on a horse, along with a boy and girl representing the country's youth. When you look at the base, you'll see the dates for several important military victories listed.

Image Courtesy of Wikimedia and Berkegezer.
2

Kaleic (Old Antalya) is a small historic section at the center of the sprawling modern city. Until modern times, almost the entire city was confined within its walls. It has structures dating from the Roman, Byzantine, Seljuk, Ottoman and modern Turkish republican eras. Most of it however, dates to the late 18th and 19th centuries.

While some of the traditional Turkish homes are occupied by residents, many have been converted into boutique hotels, restaurants and shops selling handicrafts and other folkloric arts. The area has been undergoing to an extensive restoration by the municipality of Antalya.

The Kaleiçi area is located in the centre-eastern portion of the city along the mediterranean coast fronted by the yacht harbour that dates to the Roman era.

Today it is the touristic center of the city with its hotels, bars, clubs, restaurants, and shopping.

The name Kaleiçi means "Inside the Kale" or "Inner Kale" (Kale itself means castle or fortress).

Image Courtesy of Flickr and Omer Unlu.
Sight description based on Wikipedia.
3

Iskele Mosque is a very small, charming mosque in the old Yacht Harbor area. Historical documents are not specific about its time of construction, except that it was renovated as part of the Inner Bailey restoration project. Situated near the marina, this eye-catching 19th century mosque was built of white stone with a short minaret and is supported by four columns.
Image Courtesy of Wikimedia and Dosseman.
4

The Old City Marina was the site of the first harbor in Antalya. Today, it is still an active marina with fishing boats and yachts alike moored here. You'll enjoy being able to watch the fishing boat owners bringing their catch in for all to enjoy. Some of the yachts include impressive luxury vessels.

There are cafes on the marina that serve coffee and tea in an authentic Turkish atmosphere. You can also purchase fish fresh from the fishing boats, prepared as you like. The restaurants that offer fresh seafood also sell traditional Turkish cuisine that you won't want to miss.

You'll enjoy the souvenir shops here, which allow you to select fun trinkets for yourself or as gifts. Traditional Turkish crafts are also popular items to find here. You can also buy traditional spices that form the basis of some of the most popular Turkish cuisine. Don't leave this area empty-handed.
Image Courtesy of Wikimedia and Hasan.unal.
5

The street is packed with eateries of all kind as well. Historical architecture and old houses line the street, keeping the local identity. During the hot seasons, it is advised to carry a bottle of water to keep you hydrated as you explore the street.
Image Courtesy of Flickr and Josbert Lonnee.
6

Yivli Minaret Mosque is a historical mosque in Antalya. The mosque's fluted minaret, which is decorated with dark blue tiles, is a landmark and symbol of the city. The mosque is located in the Antalya old town.

The mosque was first built in 1230 and fully reconstructed in 1373. The first building may have been a Byzantine church originally and may have been converted into a mosque around 1225-1227, during the reign of the Seljuk sultan Ala ad-Din Kay Qubadh I. The original mosque was destroyed in the 14th century and a new mosque was built which, with its six domes, is one of the oldest examples of multi-dome construction in Antalya.

Yivli Minaret is located behind the mosque of the same name and is a separate structure. A four-sided base supports a minaret composed of eight fluted sections, which enclose a series of 90 steps leading to the top. Its very beautiful blue and dark blue tiles draw one's attention to this landmark. The minaret was constructed between 1219 and 1236.

Besides the famous minaret and mosque, the Yivli Minaret complex includes other notable structures, such as a building once used as a lodge for the Mevlevi Dervishes. Two domed tombs are also located on the grounds: the tomb of Zincirkıran Mehmet Bey was built in 1377, and another was built in 1502 as a memorial for Ayşe Hatun who was the consort of Sultan Bayezid II, and mother of the next sultan Selim I. A former Islamic seminary, Atabey Aramgan Medresseh has been restored to function as a bazaar.
Image Courtesy of Wikimedia and Bestalex.
7

The Clock Tower that dates to 1901 and features a unique square shape. The occasion for the tower's construction was the 25th year of Abdulhamit II's reign. This tower has been constructed of rough stone and has a foundation that incorporates the older part of the city's walls.

Each wall has a clock face, making it easy to tell the time when coming from any direction. There are arches and crenellations above the clock faces, done in beautiful Arabic style. If you should be in the area after nightfall, you'll find the tower beautifully illuminated. Visitors will quickly see why this area of town is so popular for photo opportunities.

Although visitors can only view the tower from outside, a visit will provide you with an excellent chance to appreciate the city center's history. Hadrian's Gate is only about 400 meters from the tower. You will also see a lot of activity near the clock tower that includes bazaars.
Image Courtesy of Flickr and Franz-Josef Molitor.
8

King Atallos II of Pergamon is thought to have founded Antalya in the 2nd century BC. His monument is located on Republic Street in Antalya, opposite the Clock Tower. It is an old monument but well preserved to this day, with an excellent location that draws thousands of tourists on a daily basis.

As you walk from the Clock Tower to North, in the first block of Kazim Özalp Caddesi, more or less to the right (east) of the Attalos statue, is a warren of tiny lanes close-packed with little shops, mostly selling jewelry and souvenirs. Look for an arched entrance to access the city’s prime market for food and indeed for everything else as well.

Here visitors can buy local and international textile, gold and silver jewelry, carpets and much more. Once you have decided what you want to purchase, don't rush to pay the asking price, and don't reveal how much money you have. Do not forget that sellers expect bargaining in Turkey. There are those that say that “Negotiate” is their slogan.

The main bazaar is captivating to visit. Besides leather goods, carpets, clothes, and much more, you will be served with apple tea. Serving tea to visitors is a very pleasant tradition in Turkey. The market is open even on holidays.
Image Courtesy of Flickr and Thomas Wenger.
10

The gate was formerly enclosed by the city walls so it was not used for centuries. This may be the reason why there was little wear and tear to the gate, and it was only revealed when the city walls collapsed. It is considered as Pamphylia's most beautiful gate. The upper part has three apertures in the shape of a cupola, and except for the pillars is built entirely of white marble. The ornamentation is very striking.

On both sides of the gate are towers, which were not built at the same time. The southern tower is known as the Julia Sancta tower and is a work of the Hadrian era. It was constructed of plain stone blocks. The northern tower is much older. The base of the northern tower belongs to antiquity, the upper part is likely built by the Seljuks.
Image Courtesy of Wikimedia and Cobija.
11

Karaalioglu Park is one of Antalya's most noteworthy attractions. The Gulf of Antalya, as well as the cliffs that overlook the harbor, are some of the most popular sights. One of the things that visitors enjoy the most about this park is the wealth of photo opportunities that are available.

One of the most noteworthy highlights is Hıdırlık Tower, which dates to the second century. There are sculptures here that visitors enjoy the chance to photograph and take selfies with. These sculptures include the Worker and Son, the monument to poet Nâzım Hikmet, the famous Frog and Hand sculptures, and the statue of Don Quixote.

The entrances to the park have a few places where you can get drinks or snacks. A pub that serves burgers and a beer is one of the more popular places to visit. You can also try a coffee shop near the main park entrance that serves tasty snacks, in addition to great coffee.
Image Courtesy of Wikimedia and Bestalex.

Shopping in Antalya can be both a peaceful therapy session or an exhilarating adrenaline rush, depending on where you go. Either way, it is quite enjoyable, given an amazing range of retail offerings, which, apart from a few striking photo opportunities, provide setting for an ideal shopaholic's paradise.

Some of the best shopping in town is found in the old district of Kaleiçi replete...  view more

A gateway to Turkey's southern Mediterranean, Antalya was founded circa 150 BC by Hellenic King Attalus II of Pergamon, and was named Attaleia or Attalia in his honor. Today, this name is still used in Greek, whereas in Turkish it has evolved as Adalia and eventually Antalya.

Throughout its history, the city changed hands several times. Not long after its foundation – in 133 BC – it...  view more