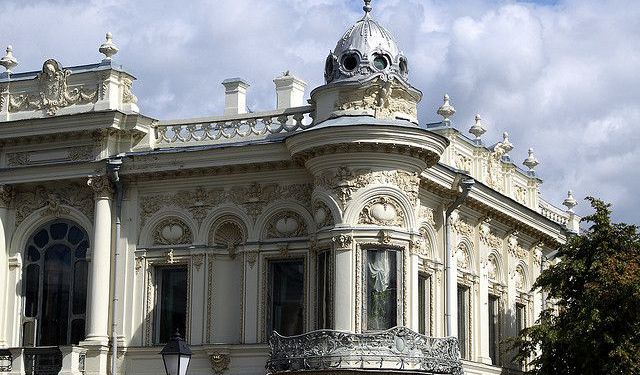 Kazan’s architectural splendors make for an enchanting experience to visitors of this historic city. Its most significant landmarks are located in the center of the city, including the famous Qolsharif Mosque and Söyembikä Tower. Discover Kazan’s most popular architectural attractions in the following tour.
Image Courtesy of Flickr and walter callens.
How it works: Download the app "GPSmyCity: Walks in 1K+ Cities" from iTunes App Store or Google Play to your mobile phone or tablet. The app turns your mobile device into a personal tour guide and its built-in GPS navigation functions guide you from one tour stop to next. The app works offline, so no data plan is needed when traveling abroad.

1) Ministry of Agriculture and Foodstuff (must see)

Construction of the Ministry of Agriculture and Foodstuff began in spring 2008. One of Kazan’s most famous and amazing buildings, it features Renaissance elements, and a central element of a bronze tree with green lights representing leaves. The name of the building in Russian and Tataran can be found on its facade in metal letters.
Image Courtesy of Flickr and Ed Erkola.
2

Söyembikä Tower is probably the most familiar landmark and architectural symbol of Kazan. Once the highest structure of that city's Kremlin, it used to be one of the so-called leaning towers. By the early 20th century, its inclination was estimated at 194 cm (76 in). Diverse stabilization methods were used to straighten the tower in the 1930s and 1990s. The tower's construction date is enshrouded in mystery. Several scholars date its construction to the turn of the 17th and 18th centuries, when the tiered towers were exceedingly popular in Russia, but others date the tower to the 16th century, probably before 1552. In the Imperial period, the tower used to be topped with a double-headed eagle, which the Bolsheviks replaced with a red star. It is currently crowned with a Muslim crescent.
Image Courtesy of Wikimedia and Untifler.
Sight description based on Wikipedia.
3

Qolsharif is considered to be one of the most important symbols of Tatar aspirations. Nowadays the mosque predominantly serves as a Museum of Islam. At the same time during the major Muslim celebrations thousands of people gather there to pray. The Qolsharif complex was envisioned to be an important cornerstone of Kazan's architectural landscape. Besides the main mosque building it includes a library, publishing house and Imam's office.

Image Courtesy of Flickr and hadoken.
Sight description based on Wikipedia.
4

Located on the site of a medieval trade center, Gostiny Dvor is a monument of beautiful Russian architecture. From 1800 to 1803, a new building was constructed to replace the previous one from 1770 which had been destroyed by fire in 1797. Built in a Russian classical style, it is open on the west side and includes the Transfiguration of Christ Church. Having suffered numerous fires, its facade and interior have undergone several reconstructions.
Image Courtesy of Flickr and Kevin Tierney.
5

Located on Bauman Street, this large building is a real architectural masterpiece. One of architect Foma Petondi’s most significant works, Hotel Kazan was initially the Melnikov House, but was later reconstructed. All three of its buildings are decorated with garlands, with later additions of the frieze and columns. In the middle of 20th century the facades and interiors were redesigned.
Image Courtesy of Flickr and Vaucher Bastien.
6

Built in 1901, the Chenoyarovsky Passage is a modern architectural monument. Known as the profit house of merchant A. Chernoyarov. Constructed in an eclectic style, it also has elements of Baroque and Art Nouveau design. Additional buildings are connected to the main building by covered passages.
Image Courtesy of Flickr and wileyokiley.
7

Located on Liberty Square, Kazan City Hall was founded in 1858. This two-story building resembles an Italian palazzo, with a classical eclectic facade and interior and dry frescoed walls. One of Kazan’s most unique architectures, it hosts a variety of presentations, international conferences and ceremonial events.
Image Courtesy of Wikimedia and TY-214.
8

Founded in 1804, Kazan State University, one of Russia’s largest and oldest universities, is famous for having Vladimir Lenin as a student. Known as a forerunner in the study of chemistry due to the works of Arbuzov and Butlerov, the university became one of the largest centers of education, culture and science. The oldest part of the building contains three portals along its white facade.
Image Courtesy of Flickr and walter callens.
9

9) National Bank of the Republic of Tatarstan

The National Bank of the Republic of Tatarstan, constructed between 1912 and 1914, is a two-story neoclassical building with columns and an entablature. Some of Russia’s gold reserves were stored in its basement from 1917 to 1918. Architect A. Karimullin erected the right wing during the 1996 reconstruction.
Image Courtesy of Flickr and mikhail_k.
10

Shalyapin Palace Hotel is a restored architectural masterpiece filled with all the mystery and splendor of times past. It offers the warmest hospitality and comfort demanded by even the most discriminating guest. Its windows face the beautiful city center and the classical interior possesses modern and national elements. Whether a short or long stay, its high-quality staff is always willing to accommodate with outstanding service.
Image Courtesy of Flickr and Larry.
11

The Grand Hotel is a modern 17-story hotel complex opened in early 2009. Conveniently located near theaters, shops and entertainment venues, the building boasts an impressive eclectic architecture with modern elements that attracts many guests. It was also the first building in the city to feature a helicopter pad on its roof.
Image Courtesy of Flickr and walter callens.