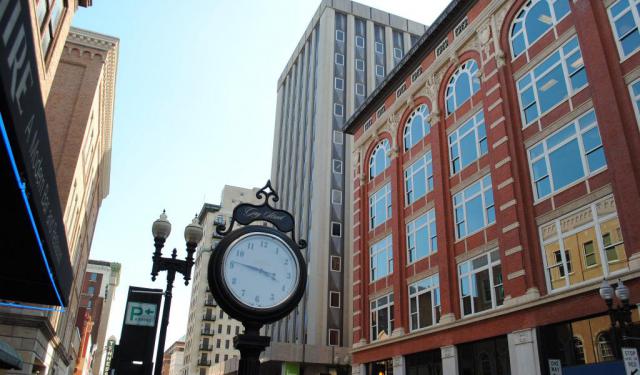 Image by Brian Stansberry on Wikimedia under Creative Commons License.

Knoxville County is home to nearly 100 listed historic properties and districts, representing the area’s prestigious and rich history. Check out the following tour of the most prominent historic and architectural gems Knoxville has to offer.
How it works: Download the app "GPSmyCity: Walks in 1K+ Cities" from iTunes App Store or Google Play to your mobile phone or tablet. The app turns your mobile device into a personal tour guide and its built-in GPS navigation functions guide you from one tour stop to next. The app works offline, so no data plan is needed when traveling abroad.

The Craighead-Jackson House is a historic two-story, brick house in Knoxville. The home was constructed by John Craighead in 1818. The house is on the National Register of Historic Places. The Craighead-Jackson is a white brick house consisting of two stories and a basement. The first story consists of a hallway that spans the center of the house from east to west and contains the house's two main entrances and staircase, with a sitting room on the north side of the house and a parlor on the south side. The second story has two bedrooms, with the south side bedroom being slightly larger than the north side bedroom. The basement has a dining room and a large "unfinished" room. Chimneys are located at both the north and south ends of the house. A small porch graces the door along the front (west) facade of the house, and a larger covered porch is located at the rear of the house.

Image by Brian Stansberry on Wikimedia under Creative Commons License.
Sight description based on wikipedia
2

The Andrew Johnson Building is a high-rise office building in downtown Knoxville. Completed in 1930, the 203-foot (62 m) structure was Knoxville's tallest building for nearly a half-century. The building was originally home to the Andrew Johnson Hotel, and is now used for office space by Knox County. The building's eighteen stories consist of fifteen floors, a mezzanine, and a two-story penthouse. The building is rectangular in shape, with a recess running up the middle of the west facade. The ground floor extends out beyond the rest of the building to provide a base for the unique second story, which includes an open-air pavilion.

While most of the building's exterior consists of brick, the ground floor's Gay Street facade is sheathed in concrete cast to appear as rusticated stone. Most of the windows for floors four through fifteen are simple, rectangular windows, with the exception of the fourteenth-floor windows, which are topped by small arched pediments. Atop the building is the penthouse, which is seven bays wide, and is adorned with brick Ionic pilasters. In 1980, the Andrew Johnson Building was added to the National Register of Historic Places.

Image by Brian Stansberry on Wikimedia under Creative Commons License.
Sight description based on wikipedia
3

The Knox County Courthouse is a historic building located at 300 Main Street in Knoxville. Built in 1885, it served as Knox County's courthouse until the completion of the City-County Building in 1979, and continues to house offices for several county departments. The courthouse is a 2.5-story brick structure with an imposing clock tower. It contains a mixture of architectural styles, including Colonial elements in the clock tower and Gothic elements (including qua-trefoil patterns) in the balcony and porch. Much of the interior has been altered. The courthouse is listed on the National Register of Historic Places for its architecture and its role in the county's political history.

The First Bank Building was constructed in the mid-1920s and has over the years housed the offices of dozens of banks, physicians, and various financial and architectural firms. In 1988, the building was listed on the National Register of Historic Places for its architecture and its role in Knoxville's commercial history.

The main facade of the building, facing Market Street, consists of three arched openings, with the north opening leading to the general lobby, the south leading to the bank lobby, and the middle opening containing a window. The bank lobby is the most elaborate interior room, consisting of arched ceilings and a second-story mezzanine with a balustrade. The general lobby contains marble floors and bronze-plated elevator doors. Much of the building's interior was extensively remodeled in the early 1970s.

The theatre first opened on October 1, 1928, and with nearly 2,000 seats in the auditorium, was billed as "Knoxville's Grand Entertainment Palace". Its interior was designed by Chicago architects Graven & Mayger in the Spanish-Moorish style, although the design incorporates elements from all parts of the world: Czechoslovakian crystals in the French-style chandeliers, Italian terrazzo flooring in the Grand Lobby, and Oriental influences in the carpet and drapery patterns. The theatre was one of the first public buildings in Knoxville to have air conditioning. The theatre also featured a beautiful Wurlitzer Organ. On April 1, 1982, it was placed on the National Register of Historic Places.

The Holston is a condominium high-rise located in Knoxville. Completed in 1913 as the headquarters for the Holston National Bank, the fourteen-story building was the tallest in Knoxville until the construction in the late 1920s of the Andrew Johnson Hotel, located a few blocks away. The Holston was designed by architect John Kevan Peebles, and today represents the city's only Neoclassical Revival-style high-rise.

In 1979, the building was added to the National Register of Historic Places for its architecture and its prominent position in the Knoxville skyline. Most of the building is built with buff yellow brick, with the exception of the first three stories of the Gay Street and Clinch Avenue facades, which are sheathed in Tennessee marble. The interior of the Holston, although heavily renovated in 1977, still contains several original elements. The entrance foyer has a vaulted ceiling with plaster rosettes, and a frieze decorated with triglyphs and metopes. The lobby originally contained Greek and Art Deco motifs, but these were removed during the 1977 renovation.

The Fidelity Building is an office building in Knoxville, initially constructed in 1871 for the wholesale firm Cowan, McClung and Company. The building was home to Fidelity-Bankers Trust Company during the mid-twentieth century, and has since been renovated for use as office space. In 1984, the building was added to the National Register of Historic Places for its architecture and its role in Knoxville's late-nineteenth century wholesaling industry.

The Fidelity Building is a four-story, three-bay brick building originally constructed in 1871, and extensively remodeled in 1929. The building was originally designed in an Italianate style, and contained a central pediment and balustrade, and storefronts flanked by Corinthian columns. In 1929, the architectural firm Baumann and Baumann remodeled the building, and the pediment, balustrade, and exterior Corinthian columns were removed.

The building's first-story Gay Street facade, which reflects the 1929 remodeling, consists of an ashlar veneer, with a recessed entrance topped by an eagle-and-garland frieze. The rear of the building is largely unaltered from its 1871 design, the exception being a one-story addition added in the early 1980s. The building's interior, which also reflects the 1929 remodeling, includes a central hall with gray marble walls and floors, and square Corinthian columns.

Old City Hall is a complex of historic buildings, originally constructed in the late 1840s as the Tennessee School for the Deaf and Dumb (now the Tennessee School for the Deaf). The complex served as Knoxville's city hall from 1925 until 1980. Old City Hall has been listed on the National Register of Historic Places and has been documented by the Historic American Buildings Survey. It currently houses Lincoln Memorial University's Duncan School of Law.

The complex consists of five interconnected buildings - the three-story main building, completed in 1851, and four additions behind the main building, built between 1874 and 1899. The entire complex sits atop a wooded knoll. The facade of the central section contains a portico with four Ionic columns supporting a large pediment, and accessed by a marble staircase. One of the rear additions was designed in the Italian Renaissance style, and another contains Neoclassical elements. The buildings' interiors have been modified extensively over the years as the roll of the complex changed.

The Louisville and Nashville Depot, a former train station on Western Avenue and Henley Street in downtown Knoxville, was added to the National Register of Historic Places in 1999. Constructed in 1905, this Victorian structure was initiated by Richard Montfort, the railroad’s master engineer. It served as a major passenger terminal for 65 years. The building was refurbished in 1982. Today it accommodates a banquet hall and office space, a perfect venue for wedding receptions and other civic events.
Image by Brian Stansberry on Wikimedia under Creative Commons License.
10

10) Foundry on the World’s Fair Site

This foundry, constructed in downtown Knoxville in 1865 to meet the needs of the city and particularly the railroad, was abandoned, burned and completely renovated for the 1982 World’s Fair. Purchased by the present owners in 1993, this landmark is listed in the National Register of Historic Places. Today this beautifully restored iron foundry houses a spacious banquet hall for weddings, parties, luncheons and other special events.
Image by Brian Stansberry on Wikimedia under Creative Commons License.
11

Laurel Terrace Knoxville, a most astonishing preserved house, was constructed in 1893 as a residence for candy manufacturer Martin Luther Ross’ family. This elegant property in the Fort Sanders Historic District, located two blocks from the UT campus, is distinguished for its Romanesque details and beautifully landscaped award-winning gardens.
Image by Brian Stansberry on Wikimedia under Creative Commons License.
12

Home to the Jubilee Community Arts in the Fort Sanders Historic District, the Laurel Theater was formerly the site of the Fort Sanders Presbyterian Church. Constructed in the late 19th century, this building was extensively renovated in the 1980s into a top rate concert hall, including a second stage, administrative offices and other facilities. The Jubilee Community Arts is a foundation devoted to the preservation and promotion of original music and art from the Southern Appalachians.
Image by Brian Stansberry on Wikimedia under Creative Commons License.

Since the 1790s Kingston Pike, located on Knoxville’s west side, has been the city’s major thoroughfare and commercial district, including many cultural, religious, food, entertainment and retail establishments. The following tour of Kingston Pike includes the thriving Bearden District, the center of Knoxville’s arts community.

Knoxville is home to over 450 churches of many religious denominations. Situated at the core of the Bible Belt, many of them are Protestant. The following tour highlights the city’s most impressive religious sites, including Knoxville’s first churches and other historically significant ones.

Downtown Knoxville is the best place to take a lovely daytime stroll. The following tour of attractions includes children’s favorites the Candy Factory and Fort Kid and several other family-oriented landmarks and entertainment venues.

Knoxville offers an amazing collection of fascinating museums that highlight the cultural development and history of the region, honoring local achievements in sports, civic development and the arts. Take the following tour to discover some of Knoxville’s best museums.