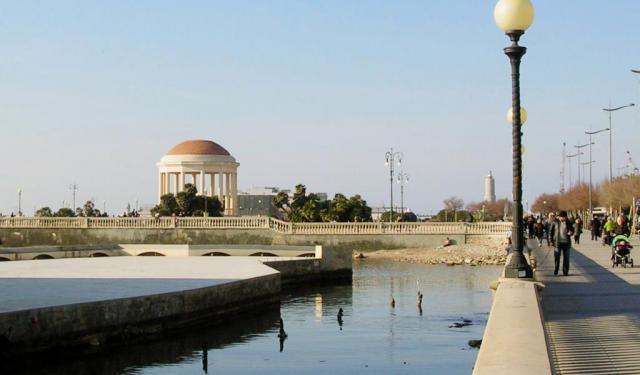 Image by Etienne (Li) on Wikimedia under Creative Commons License.

Livorno is a charming town with plenty of unique places to see and visit. Its old neo-Classical streets are full of liveliness and color. Take this self-guided walking tour to check out the most popular local spots, including the Central Market, Via Grande and other interesting places.
How it works: Download the app "GPSmyCity: Walks in 1K+ Cities" from iTunes App Store or Google Play to your mobile phone or tablet. The app turns your mobile device into a personal tour guide and its built-in GPS navigation functions guide you from one tour stop to next. The app works offline, so no data plan is needed when traveling abroad.

Originally used for services of the Presbyterian Church of Scotland, in 1911 Chiesa Evangelica Valdese was purchased by the Evangelical Waldensian Church. Large Gothic doors and windows topped with three rows of arches suggest the neo-Gothic architectural style. Come inside to observe local daily activities and enjoy the harmonious atmosphere of this modest church.
Image by Lucarelli on Wikimedia under Creative Commons License.
2

The Old English Cemetery is one of the oldest non-Roman-Catholic cemeteries in Italy. The cemetery survived great damage caused by bombing during WWII, which also damaged the adjoining Waldensian and St. George Churches. It remains one of the most charming and interesting places in Livorno. After WWII the cemetery was found hidden behind a large six-story apartment-block, which illustrates the distinct lack of sensitivity of the local administration at the time. The entrance is located in a small square, accessible through the property of the Arciconfraternita della Misericordia. The cemetery is a large quadrangle, characterized by dense arboreal vegetation, with century-old cypress trees and various Mediterranean plants. A notable feature is the presence of some Virginia secular elms which are said to have been planted by American sailors visiting the graves of their loved ones.
Image by Madmats on Wikimedia under Creative Commons License.
Sight description based on wikipedia
3

Metropolis is a popular bar that offers live music by local singers and bands, as well as touring performers. The warm, wooden interior, comfy chairs and attractive bar often draw in the town’s cultural elite. It is not a concert hall, so the atmosphere here is lively and vibrant, and the crowd is often friendly and up for a chat. Come here to get a taste of Livorno's culture and enjoy a live performance in an intimate setting.
Image by Andrea Dell'Amico on Flickr under Creative Commons License.
4

The Livorno Market building’s 95-meter-wide facade is characterized by two rows of large, round-arched windows that provide maximum light to the interior, while the entrance is highlighted by four classic columns. The main hall’s interior decorations were designed by Lorenzo Gori. Be sure to check out the beautiful architectural features of this huge water-front complex.
Image by Etienne (Li) on Wikimedia under Creative Commons License.
5

Via Grande is one of Livorno’s oldest and busiest streets. A variety of fashionable shops, souvenir street-stalls, lovely cafés and restaurants are located along this charming historic street. Take a walk on Via Grande to feel the vibrancy and color of daily local life.
Image by Luca Aless on Wikimedia under Creative Commons License.
6

The Bad Elf is a British-style pub popular for its amazing selection of international beers, many of which are made in Great Britain, the Czech Republic and Belgium. The bar’s menu includes some delicious Italian specialties such as pasta dishes, taglieri and pizzas. Come and enjoy the warm atmosphere and friendly crowd.
Image by madmolecule on Flickr under Creative Commons License.
7

One of the buildings in Livorno’s Little Venice is called Bottini dell’olio because it was originally used to store olive oil. Today it hosts temporary exhibitions and is home to the Labronica Library. A plaque, which recalls the stages of construction, is located on the access door to the warehouse that consists of a vaulted hall with Tuscan pillars arranged in three aisles. The structure of the library, which houses publications from 1950 onwards, is characterized by wide, wooden roof trusses, supported by a row of pillars.
Image by Etienne (Li) on Wikimedia under Creative Commons License.
8

La Svolta bar is a popular night venue located in Livorno’s Little Venice quarter. A dynamic, young, local crowd often gathers here to mingle and chat. The bar is small, and many visitors prefer the bar’s front area for its stunning views of the canal. This unpretentious place offers a good variety of mixed drinks and local beers.
Image by Dtarazona on Wikimedia under Creative Commons License.

Situated along the coast of the Ligurian Sea, Livorno is one of the most important Italian ports, both in terms of commerce and tourism. Livorno’s charming historic streets, beautiful monuments and large squares are picturesque and stunning. The following walk will guide you to the town’s most prominent public places.