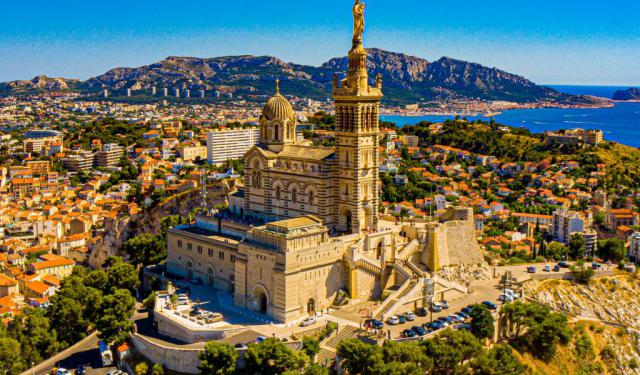 Image by MickaëlG on Wikimedia under Creative Commons License.

Marseille is rich in sacred places, religious sights and buildings. Most of them represent Roman-Byzantine style and wouldn’t leave you indifferent. Often their interior is decorated with inlaid marble, mosaics and murals.
How it works: Download the app "GPSmyCity: Walks in 1K+ Cities" from iTunes App Store or Google Play to your mobile phone or tablet. The app turns your mobile device into a personal tour guide and its built-in GPS navigation functions guide you from one tour stop to next. The app works offline, so no data plan is needed when traveling abroad.

Marseille Cathedral, or Cathédrale de la Major, is a Roman Catholic cathedral and a national monument of France. It was built on an enormous scale in Byzantine-Roman style from 1852 to 1896 on the site used for the cathedrals of Marseille since the fifth century, principally by the architects Léon Vaudoyer and Henri-Jacques Espérendieu (1829-1874). Some modest structures remaining from the largely demolished earlier cathedral, the "Vieille Major", still stand alongside, dwarfed by the huge scale of the later construction.

Why You Should Visit:
Spectacular from the outside and well located right by the sea so that you can really get an impression of the grandeur.
The whole structure is impressive and every time you take a look, you see something different.


Image by Acp on Wikimedia under Creative Commons License.
Sight description based on wikipedia
2

A Roman-Provincial church constructed in the 12th century, Eglise Saint-Laurent is a gorgeous Catholic church that, together with the Saint Catherine chapel, withstood the destruction of the Saint-Jean district during the German occupation. The church possesses different works of art from the late Gothic period, found only in Marseille.
Image by Robert Valette on Wikimedia under Creative Commons License.
Sight description based on wikipedia
4

Eglise Saint Charles is a fine example of neoclassical architecture. It was first erected in 1826 and later underwent a number of renovations. The church has an exceptional organ, and classical concerts take place here daily.
Image by Finoskov on Wikimedia under Creative Commons License.
Sight description based on wikipedia
5

Opening Hours:
Mon-Sat: 9am-7:30pm; Sun: 9am-6pm
To visit the crypt, plan your visit from 4 to 6pm
Image by Tanya Dedyukhina on Wikimedia under Creative Commons License.
Sight description based on wikipedia
6

Notre-Dame de la Garde is an ornate Neo-Byzantine church which is situated at the highest natural point in Marseille, a 532 feet limestone outcrop on the south side of the Old Port and it is the site of a popular annual pilgrimage every Assumption Day.

Built by architect Henri-Jacques Espérandieu, the basilica was consecrated on 5 June 1864. It replaced a church of the same name built in 1214 and reconstructed in the 15th century. The basilica was built on the foundations of a 16th-century fort constructed by Francis I of France to resist the 1536 siege of the city by Emperor Charles V.

The basilica is made up of two parts: a lower church, or crypt, dug out of the rock and in the Romanesque style, and an upper church of Neo-Byzantine style decorated with mosaics. A square bell-tower of 135 feet is surmounted by a belfry of 42 feet which itself supports a monumental, 27 feet tall statue of the Madonna and Child made out of copper gilded with gold leaf. The stone used for the construction of the basilica was discovered to be sensitive to atmospheric corrosion. Extensive restoration took place from 2001 to 2008. This included work on the mosaics, damaged by candle smoke, and also by the impact of bullets during the Liberation of France at the end of World War II.
Image by stephanemartin on Flickr under Creative Commons License.
Sight description based on wikipedia
7

The church was built between 1920 and 1947. You will notice a mixture of Roman-Byzantine and eclectic styles. In June, the ‘magistrate's vows’ remain a tradition here. Inside, the sublime marble, granite, mosaics and stained-glass windows mix well. A Pietà (Virgin) signed by the sculptor Louis Botinelly and stained-glass windows by Henri Pinta make it well worth the visit.
Image by Robert Valette on Wikimedia under Creative Commons License.
Sight description based on wikipedia