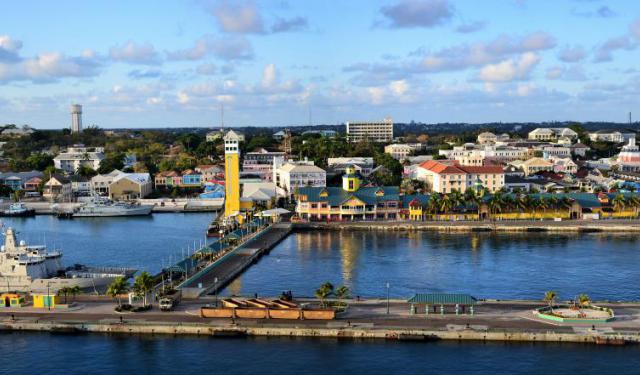 Image by Lyn Gateley on Wikimedia under Creative Commons License.

Nassau – capital of the Bahamas – is a popular cruise-ship destination, renowned for its natural and man-made attractions. Apart from the beaches and colorful marine life, the city's other main lure is eventful history reflected in a number of typical pastel-colored British colonial buildings, such as the pink-hued Government House, the Pirates of Nassau Museum and others. To find out more about Nassau's key points of interest, follow this orientation walk.
How it works: Download the app "GPSmyCity: Walks in 1K+ Cities" from iTunes App Store or Google Play to your mobile phone or tablet. The app turns your mobile device into a personal tour guide and its built-in GPS navigation functions guide you from one tour stop to next. The app works offline, so no data plan is needed when traveling abroad.

Fort Fincastle is an outstanding historical site. The fort was built on Bennet's Hill around 1793. Fincastle received the title of the lord who constructed it. The fort was built to protect the island from enemies and even today tourists will find several of the old weapons that were left behind.
Image by BrokenSphere on Wikimedia under Creative Commons License.
2

Queen's Staircase was built by slaves to honor Queen's Victoria help in the abolition of slavery in the The Bahamas. There are 65 stairs that were recently renovated and the construction of this monument is still regarded as remarkable because of the way they were constructed.
Image by stephenvance on Flickr under Creative Commons License.
3

Parliament Square is a very beautiful square in Nassau with a statue of Queen Victoria and several government buildings in the distant horizon. Some of the buildings were built in the 18th century and display a semi circular form that is evident of the Georgian style and colonial architecture.
Image by Crm18 on Wikimedia under Creative Commons License.
4

Rawson Square faces Parliament square and offers some important monuments. Churchill Building, where the members of Bahamas government sit, is among the most popular. Also, tourists may visit the monument to Sir Milo Butler, an important person in the history of the Bahamas. Butler was the first governor of this country when the islands received independence from Great Britain in 1973.
Image by Cairlinn on Flickr under Creative Commons License.
5

Bay Street is the main street of the city of Nassau and the premier shopping mecca for millions of tourists. The buildings lining both sides of Bay Street reflect the architecture of the country's history as a British Colony.
Image by Roger W on Flickr under Creative Commons License.
6

The Straw Market in Nassau is a very popular venue for local souvenirs and crafts. The market attracts a lot of tourists as one will not grow bored with the plethora of straw items such as dolls, hats, baskets, and bags. You will also find handicraft wooden items, masks, statues, jewelry, sea shells, and many other objects of value here.
Image by dj drüe on Flickr under Creative Commons License.
7

Christ Church Cathedral is a huge stone cathedral in downtown Nassau. The cathedral is the historical landmark of the city. The original building dates back to 1670 and became a cathedral in 1861. The building of the church is very impressive and must be visited while in Nassau.
Image by mhowry on Flickr under Creative Commons License.
8

8) Pirates of Nassau Museum (must see)

The Pirates of Nassau Museum is a very popular museum, located in a long building with several rooms that depict the life of a pirate. Tourists will discover terrific wax figures of the pirates, their weapons, and the overall ambiance of the 17th century pirate village.

Image by greyloch on Flickr under Creative Commons License.
9

Government House is the official residence of the Governor General of the Bahamas. Built on a hill known as Mount Fitzwilliam and completed in 1806, this imposing stuccoed-coral-rock building on Duke Street is the Bahamian archipelago's foremost example of Georgian Colonial architecture.

In 1814, Colonel Don Antonio de Alcedo, a Spanish scholar and soldier, wrote admiringly of its effect. The Oriental Herald, in 1825, stated: "The new Government-House, standing on the centre of the ridge that overlooks the town, was built by a sum voted by the House of Assembly from the funds of the Treasury and cost upwards of 20,000l. It is built in the European style of architecture, and is universally considered the best building of the kind throughout the West Indies".

The building's original neoclassical aspect, as well as its stone construction, was directly influenced by the arrival of Loyalists from the southern United States in the 1780s. Previously most Bahamian buildings had been built of painted wood. Typically Bahamian elements, however, include louvered wood shutters and brightly painted exterior, in this case a brilliant shade of conch-pink. The primary façade, centered on a pedimented entrance supported by four stout Ionic columns, dates from the 1930s, when the building was remodeled following the hurricane of 1929.


Image by Crm18 on Wikimedia under Creative Commons License.
Sight description based on wikipedia
10

St. Francis Xavier Cathedral is another beautiful old church in downtown Nassau. The cathedral is the oldest Roman Catholic Church in the Bahamas, with construction that began around 1885. Visitors will also discover various religious statues in the area around the cathedral.
Image by Paul McClure on Flickr under Creative Commons License.
11

Fort Charlotte is a British-colonial era fort built on a hill over-looking the harbor of Nassau. The fort sits a short walk west of downtown Nassau and the cruise ship terminal. The fort was constructed in the late 18th century by British colonial governor Lord Dunmore after the end of the American Revolutionary war. The fort has never been used in battle.

12) Ardastra Gardens and Zoo (must see)

Ardastra Gardens, Zoo and Conservation Centre opened in 1937 though the work of the Jamaican horticulturist, Hedley Vivian Edwards. From the Latin Ardua astrum, Ardastra means “Striving for the stars”.

In the 1950's the Bahamian government brought flamingoes with the intention of breeding, as they had become rare there. In 1982 the gardens were bought by Bahamian, Mr. Norman Solomon, who started the first Bahamian zoo. Best known for its flamingoes, the zoo now has about 300 animals.

Nassau is the capital of Bahamas and therefore offers several museums and art galleries for tourists to visit. The art work reflects the history, culture and the local way of life. As with many cities set on an island in the ocean, one of the most popular museums is the Pirates Museum. Nassau also provides a plethora of other outstanding museums such as the Museum of Art and Historical Museum.