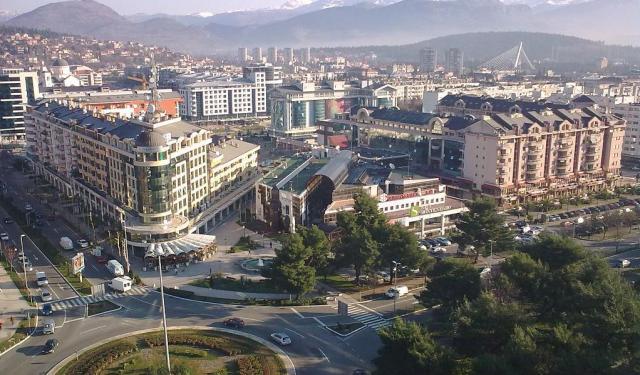 Image by Nije bitno on Wikimedia under Creative Commons License.

Podgorica, the capital city of Montenegro, although not a typical European eye candy, does contain a number of sights well deserving attention, particularly the modern-built Millennium Bridge over the Morača River and the old stone bridge over the Ribnica River, much as the Turkish-built, centuries-old Clock Tower rising over the old town. Take this orientation walk to see these and other popular attractions of Podgorica.
How it works: Download the app "GPSmyCity: Walks in 1K+ Cities" from iTunes App Store or Google Play to your mobile phone or tablet. The app turns your mobile device into a personal tour guide and its built-in GPS navigation functions guide you from one tour stop to next. The app works offline, so no data plan is needed when traveling abroad.

The Clock Tower of Podgorica is located at Bećir Beg Osmanagić square, in the Stara Varoš neighborhood. It's one of the very few Ottoman landmarks that survived the bombing of Podgorica in World War II. Sahat Kula was built in 1667, by Adži-paša Osmanagić, a prominent citizen of Podgorica. According to the legend, the clock was brought fromItaly. For a long time, it was the only public clock in the city. Around 1890, a metal cross was placed at the top of the tower. The cross was made by Stevan Radović, Lazar Radović's grandfather. Today, Sahat kula is an important cultural monument of Montenegro, protected by law. The clock was renovated in January 2012, when the old mechanism was replaced by a new digital one.
Image by Rasho992 on Wikimedia under Creative Commons License.
2

Located in the oldest part of the city, the Natural History Museum is worth visiting while in Podgorica. It displays specimens of Montenegrin flora and fauna including a collection of angiosperms and ferns, nonvertebrae, fish, reptiles, birds, mushrooms, and many more. Here you will also see a collection of entomological and palaeozoological items. This museum has no exhibition space of its own, despite many proposals and initiatives to build one.
Image by Rasho992 on Wikimedia under Creative Commons License.
3

As part of the Ottoman Empire until 1878, Podgorica has many examples of Turkish architecture. The oldest parts of the city, Stara Varoš (Old town) and Drač are typical of this, with two mosques, one of which is Starodoganjska Mosque. Built in the 15th century, it is the only active mosque in Podgorica.
Image by Rasho992 on Wikimedia under Creative Commons License.
4

Built in the 15th century by the Ottoman Turks, the Ribnica Bridge should not be missed when in Podgorica. It is an arched bridge over Ribnica river, hidden below the city center. The area surrounding the bridge is an important cultural and historic sight itself, and a great place to rest. The nearby Skaline terrace is a nice place to have a drink while admiring the stunning views.
Image by Ines Lukic under Creative Commons License.
5

Located in a park, opposite to the Parliament, King Nikola Petrovic Monument is an imposing four-meter high statue, the work of Risto Radmilović. It depicts the last king of Montenegro, King Nikola, on a horse. It was unveiled in 2005 and has since been an important landmark in Podgorica.
Image by MrSco on Wikimedia under Creative Commons License.
6

Located in the city center, the Alexander Sergeyevich Pushkin Monument is a symbol of historic and cultural relations between Montenegro and Russia. The monument depicts Pushkin enthusiastically reading his poems to his wife, Natalia Goncharova. A few first words from his poem "Bonaparte and the Montenegrins" are carved into the composition. The poem reflects the essence of the Montenegrins: courage, pride, freedom.
Image by Nikolai Ulyanov on Flickr under Creative Commons License.
7

Podgorica is particularly known for its extremely hot summers: temperatures over 40 °C are common in July and August. So, if you took a stroll around Podgorica's attractions during summer and the heat rendered you helpless, Mali Park is a perfect place to hide and have a rest. The word "Mali" translates "small", but rich in vegetation the park has a lot of places to sit in the shade.
Image by Urban on Wikimedia under Creative Commons License.
8

Situated beside the Crna Gora hotel, Karadordev Park is the greenest area in Podgorica and a great place to relax after a hard day. The park was originally built in 1927 and in 1954 it was rebuilt after being seriously damaged during the war. Most of the park is pine trees and conifers, but there is a wide variety of flowering plants as well. The greenest corner of the city centre grid, beside the Crna Gora hotel, was laid out in 1927 and reconstructed after wartime damage in 1954. The most varied of the city's parks, it has a wide variety of flowering plants, pine trees and conifers.
Image by Sten Porse on Wikimedia under Creative Commons License.
9

9) City Museum of Podgorica (must see)

Located at Marka Miljanova street, the City Museum of Podgorica is the main museum in town. It features an impressive collection of religious icons and books, archeological and other historic items. Of special interest is the collection of artifacts from the Copper age, as well as Illirian and Roman articles found in ancient Doclea. There is also a collection dedicated to Božidar Vučković, who was an important printer in the 16th century.
Image by Rasho992 on Wikimedia under Creative Commons License.
10

The street offer the newest collections of suits, shoes, wardrobe, and gallantry of famous fashion designers. Carine, Mex, Voli in one place offer everything that you need, so if you are more for this type of shopping they represent a real choice, and they also stand out with somewhat lower prices.
Image by Richard Schofield on Wikimedia under Creative Commons License.
11

Independence Square, formerly Republic Square or Square of the Republic is the central town square of Podgorica, the capital city of Montenegro. It is located in Nova Varoš, the administrative, as well as socio-cultural heart of the city. The square covers an area of 15.000 square metres. The city library "Radosav Ljumović" is located on the square, as well as the state gallery "Art".
The square is bordered by Freedom street to the east, and Njegoš's street to the west. Both Njegoševa and Slobode street are newly renovated pedestrian zones - with Ulica Slobode also being a popular shopping street. Bokeška and Vučedolska street create the square's northern and southern borders, respectively. A pedestrian passage connects the Republic Square to Podgorica's City Hall and the Montenegrin National Theatre building.
Image by Nije bitno on Wikimedia under Creative Commons License.
Sight description based on wikipedia
12

King Nikola's Palace is located in Cetinje, Montenegro, and for more than 50 years served as the seat of the Montenegrin Royal family. In 1926 it became a museum, from 1980 it was one of the departments of National Museum of Montenegro. The small palace was built from 1863 to 1867 in a simple style typical of Cetinje houses with certain elements of neoclassicism. The interiors were designed in style of Historicism (art) and Art Nouveau. In the entrance hall are exposed the Montenegrin crown jewels, which are the most popular exhibition of the National museum. The Royal Garden was built in 1870 as a pine alley. Gardens were refurbished in 1971. There are many flower beds with crocuses, geraniums, tulips and rose and jasmine bushes. In the back of garden there is cedar grove with domimant villa with small summer-house, which served fas a guest house for foreign visitors.
Image by Valley-c on Wikimedia under Creative Commons License.