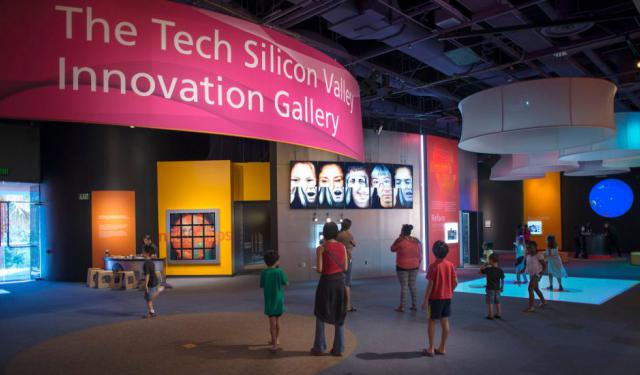 Image by SparkFun Electronics on Flickr under Creative Commons License.

The capital of Silicon Valley, San Jose is full of discovery and innovation. Also, steeped in history – established since 1777 – the city has born witness to numerous chapters of American past. When it comes to culture, education and recreation, the local museums are a perfect destination for solo adventurers new to the area.

Here, among other things, you can:
- get hands-on with technology at the Tech Museum of Innovation – dedicated to promoting the development of technology and showcasing its history; suitable for all ages; replete with a host of interactive exhibits and other exciting features;

- browse through collections of visual masterpieces at the San Jose Museum of Art – a popular spot for art and cultural enthusiasts; focused on modern and contemporary art, particularly that originated from or dealing with California;

- fuel your creative spirit from a unique experience in the complex world of textile art at the San Jose Museum of Quilts & Textiles;

- learn about Japanese-Americans’ way of life, culture, and art at the Japanese American Museum of San Jose – detailing the history of Japanese-Americans during the early- to mid-20th century, throughout World War II and thereafter;

If you take keen interest in any (or all) of these activities and feel like a modern-day explorer, anxious to visit the diverse and most fascinating museums of San Jose, feel free to embark on this self-guided walking tour for a great day out!
How it works: Download the app "GPSmyCity: Walks in 1K+ Cities" from iTunes App Store or Google Play to your mobile phone or tablet. The app turns your mobile device into a personal tour guide and its built-in GPS navigation functions guide you from one tour stop to next. The app works offline, so no data plan is needed when traveling abroad.

Children's Discovery Museum of San Jose (CDM) is located on Woz Way in downtown San Jose. Woz Way is named after Steve Wozniak, co-founder of Apple Computer, whose nickname is "Woz," and who was the single largest private donor during the original capital campaign that funded the Museum.

Children's Discovery Museum of San Jose has been ranked by Child Magazine as one of the top 10 children’s museums in the U.S. and ranked by the London Observer as one of the top 5 science centers in the world. It opened its doors in 1990, and over 6 million visitors have attended. The Museum builds and displays interactive exhibits that they believe respond to children's diverse educational needs. The 52,000-square-foot purple building was designed by Mexico City-based architect Ricardo Legorreta.

The Museum’s signature programs such as BioSITE and Discovery Youth encompass the broad themes of community, connections and creativity. These programs are intended to provide facilitated, focused, and sustained learning. The Museum’s goal is to create interactive exhibits that invite self-directed, open-ended explorations.

The Discovery Museum was designed by the world famous Mexican Architect Ricardo Legorreta. The building exemplifies his use of color, light, shadows, and water. The violet colors change from light blues to dark purples, depending on the shadows, time of year, and angle of the sun through what seem to be stragetically placed windows. This building give the City of San José two world-class structures of significant architectural importance.


Image by LPS.1 on Wikimedia under Creative Commons License.
Sight description based on wikipedia
2

The San Jose Museum of Quilts & Textiles is an art museum in Downtown San Jose founded in 1977. It is the first in the United States devoted solely to quilts and textiles as an art form. Holdings include a permanent collection of over 550 quilts, garments and ethnic textiles, emphasizing artists of the 20th- and 21st-century, and a research library with over 500 books concerning the history and techniques of the craft.The Museum of Quilts & Textiles had its beginnings as the American Museum of Quilts and Related Arts, founded in Los Altos, California by the Santa Clara Valley Quilt Association in 1977.

It was incorporated in 1986 as a nonprofit public benefit museum, managed by a board of trustees. It relocated several times until it moved into its 13,000 sq ft (1,200 m2) permanent home in San Jose’s SoFA (South First Area) Arts District in 2005.The Museum provides exhibitions from around the world, focusing on the way people of many cultures use textiles to make their voices heard. Many of the artists on exhibit at the Museum incorporate modern technology into the basic traditions of fiber art. Exhibitions and individual installations typically remain on view 3 months.

3) Tech Museum of Innovation (must see)

The Tech Interactive is a science and technology center perfect for all ages, with lots of hands-on activities. Some of the exhibits include exhibitions dedicated to biology, computer technology, and robotics. Many have hands-on features to help make learning even more engaging.

Experiences include a VR experience based on bird flight and a genetics-related experience courtesy of Stanford Tech. These experiences help visitors get the most from their encounters. One of the most significant advantages that these experiences offer is an easy way to appeal to visitors of all ages and making learning more fun.

This science center has an IMAX theater where you can see films in an unforgettable experience. Some of the companies that feature their films here include MacGillivray Freeman and National Geographic, with genres ranging from wildlife to space. There is also a cafe featuring sandwiches to go and offering indoor and patio seating.

The Japanese American Museum of San Jose (JAMsj) is located at 535 N. Fifth Street in San Jose, in the heart of Japantown. The museum's mission is to collect, preserve, and share Japanese American art, history, and culture with an emphasis on the Greater San Francisco Bay Area. The JAMsj was established in November 1987. It grew out of a 1984-86 research project on Japanese American farmers in the Santa Clara Valley. The farming project collected family histories, historical photographs, private memoirs and other unpublished documents and led to the development of a curriculum package on Japanese American history, which was adopted for use by the San Jose Unified and Eastside Union High School Districts.

San Jose is California's third-largest city and the second-largest city in Northern California. From 1849 to 1851, San Jose served as the state's first capital, which is still a local source of pride. The city has formally incorporated in 1850 and has been a center of innovation from the late 19th century, starting with agriculture and food processing.

This walking tour, “Public Art as Resistance in San José,” highlights the history of resistance and public art in downtown San José and begins on the urban university campus, San José State University. Starting from the first two works of art on campus, you’ll find that these 12 works of public art are among many in this area. However, this particular walking tour considers how San...  view more