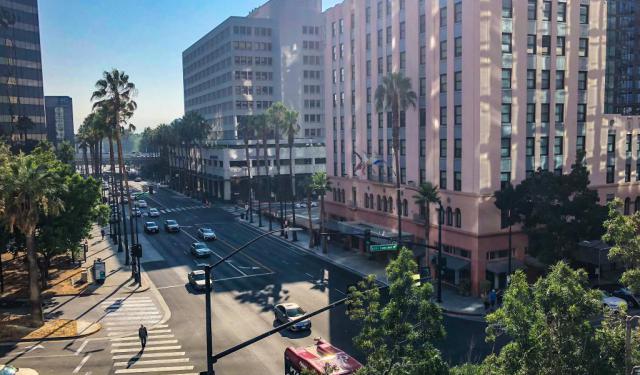 Image by kasra afzali on Flickr under Creative Commons License.

California's San Jose is where vintage and ultra-modern come to live in a perfect harmony. The city's architecture partially reflects Spanish Colonial heritage and the influence of the nearby Silicon Valley, a major technological hub in Bay Area. The key landmarks making up downtown San Jose include the San Jose Museum of Art, Cathedral Basilica of St. Joseph, Circle of Palms Plaza, San Jose City Hall and more. To see what else downtown San Jose has to offer, follow this orientation walk.
How it works: Download the app "GPSmyCity: Walks in 1K+ Cities" from iTunes App Store or Google Play to your mobile phone or tablet. The app turns your mobile device into a personal tour guide and its built-in GPS navigation functions guide you from one tour stop to next. The app works offline, so no data plan is needed when traveling abroad.

Plaza de Cesar Chavez, established in the center of San Jose in 1797, is California’s oldest public park. From 1849 to 1851 it was the site of California's capitol building. This park is currently used for a variety of events, including cultural festivals, food shows, and arts and crafts fairs. It is also the site of the city’s official Christmas tree and the San Jose Jazz Festival. During summertime outdoor concerts can be found here and wintertime offers Christmas shows.
Image by Don DeBold on Wikimedia under Creative Commons License.
2

The California Theatre, opened in 1927, is considered an architectural masterpiece. Neglected for many years, the theater was reopened after restoration in 2004. Throughout its history it has been used for theatrical performances, motion picture screenings, concerts, meetings, receptions, private parties and even weddings. This historic theater houses Opera San Jose and Symphony Silicon Valley.
Image by BWChicago on Flickr under Creative Commons License.
3

3) Circle of Palms Plaza (must see)

The Circle of Palms Plaza, located on California Historical Marker 461, the site of California’s first capital city, is a ring of palm trees around a California State Seal. Sometimes used to host events, it can hold approximately 2,000 standing or 1,000 seated guests. During the winter months it is used as an ice skating rink.
Image by Ikluft on Wikimedia under Creative Commons License.
4

Image by roarofthefour/David Sawyer on Wikimedia under Creative Commons License.
Sight description based on wikipedia
5

The Cathedral Basilica of St. Joseph is a large Roman Catholic church located in Downtown San Jose. The minor basilica is the cathedral for the Roman Catholic Diocese of San Jose in California. The basilica is named for Saint Joseph, patron saint of the universal church. The original St. Joseph's Church was built on the site of the current basilica in 1803, and was the first non-mission parish built in California. The original adobe structure was damaged by earthquakes in 1818 and 1822, and a new adobe church was built from 1835 to 1846. The second church was severely damaged by the 1868 Hayward earthquake, and work on the third church began in 1869. The third church was destroyed by fire in 1875, and a temporary fourth church was built a few blocks away while the fifth and current church was being constructed. The fifth church was dedicated by Joseph Alemany, Archbishop of San Francisco, in 1877 while construction continued. The current portico was completed in 1884, and the large dome was finished in 1885.

In 1981, a major renovation project was begun at the church, which was to become the cathedral for the new Roman Catholic Bishop of San Jose. In 1985, the church was elevated to a cathedral, pending completion of the restoration in 1990. It replaced Saint Patrick Proto-Cathedral Parish, located a few blocks away, as the cathedral of the diocese. The cathedral was made a minor basilica by Pope John Paul II in 1997.
Image by Allie_Caulfield on Flickr under Creative Commons License.
Sight description based on wikipedia
6

San Jose City Hall, opened in 2005, was designed by Richard Meier, the same architect responsible for the Getty Center in Los Angeles, the Barcelona Museum of Contemporary Art in Spain and other important buildings. At a cost of 382 million dollars, this 18-story building was designed to be environmentally friendly, making use of natural light to conserve electricity.
Image by Allie_Caulfield on Flickr under Creative Commons License.
7

St. James Park, a beautiful area in downtown San Jose where locals go for walks, is notorious as the scene where two men were lynched for the kidnapping and murder of Brooke Hart, son of the owner of L. Hart and Son Department Store. A statue of William McKinley, the 25th President of the United States, is also located in this park. McKinley is known for the Spanish-American War, which happened during his presidency, when the United States annexed Puerto Rico, Guam and the Philippines.
Image by HarshLight on Flickr under Creative Commons License.
8

San Pedro Square contains several restaurants. Opened in 1972, the Old Spaghetti Factory was the first restaurant established here. Peralta Adobe, built in 1797, is the oldest building on this square, the last remaining structure of El Pueblo de San Jose de Guadalupe. On the other side of the street Thomas Fallon, a former mayor of San Jose, built an impressive adobe in 1855. The Tabard Theater Company can be found here and the HP Pavilion is located nearby, making the restaurants on this square quite busy following events.
Image by Siddharth Patil on Wikimedia under Creative Commons License.