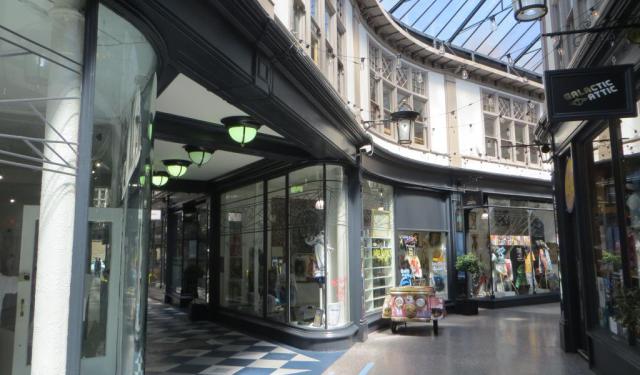 Image by David Wilson on Flickr under Creative Commons License.

Cardiff has plenty to entertain those who travel with the shopping bags in tow. Locals often call it the "City of Arcades", meaning you can delve down centuries-old alleyways that are bursting with boutiques and jewellers and vintage clothes emporiums, all while sampling locally roasted coffee beans and hopping independent brunch venues. Explore Cardiff's well-preserved and still bustling Victorian shopping arcades. Dissecting the city center, these fascinating, old covered pedestrian thoroughfares were built to allow residents and visitors to enjoy shopping indoors without having to concern themselves with the weather or the poor conditions of roads and sidewalks.***PH***
How it works: Download the app "GPSmyCity: Walks in 1K+ Cities" from iTunes App Store or Google Play to your mobile phone or tablet. The app turns your mobile device into a personal tour guide and its built-in GPS navigation functions guide you from one tour stop to next. The app works offline, so no data plan is needed when traveling abroad.

The Castle Arcade is a shopping arcade in Cardiff.

Started in 1887, it runs south from opposite Cardiff Castle, and then turns east to exit on the High Street, north of St Mary Street, in the Castle Quarter. One of the longer of Cardiff's famous Victorian arcades, it is also one of Cardiff's only two level shopping arcades, the other being Cardiff Market.

Castle Arcade is home to a variety of small boutique shops including cafes, delicatessens, fair-trade and organic retailers. There are also several shops on the gallery level.

Castle Arcade was Grade II* listed in 1975, being the "finest of Cardiff's Victorian arcades". The four storey entrance block facing onto the High Street is separately listed, also as Grade II*.

Image by Caleteron on Wikimedia under Creative Commons License.
Sight description based on wikipedia
2

High Street Arcade opened in 1886 and is a Grade II Listed building. It has entrances on High Street and St John Street in the Castle Quarter. High Street arcade is known for its range of fashion stores which include designer clothes, individual fashions, jewellery and vintage clothes as well as one of the oldest surf and skateboarding shops in Wales, City Surf. One will also find children's clothes and toys, gifts and a New York Deli in the arcade.
Image by David Wilson on Flickr under Creative Commons License.
Sight description based on wikipedia
3

Duke Street Arcade opened in 1902 is a Grade II Listed building. Duke Street Arcade joins High Street arcade, and is just opposite Cardiff Castle, in the Castle Quarter. Duke Street Arcade is lined with stores including hairdressers, bridal shops and Welsh gift shops.
Image by No Swan So Fine on Wikimedia under Creative Commons License.
Sight description based on wikipedia
4

Developed on the site of the Allders department store and the similarly named Queen Street Arcade, the main entrance is located on Queen Street, and the second entrance faces Working Street near Cardiff Central Market. The Arcade has two levels, and is unusual in that the levels are sloped, so that despite its two entrances being on the same level, the upper floor at the Working Street entrance is the ground floor at Queen Street. The centre internally connects with the St. David's Centre.

Queens Arcade recorded 11.2m annual footfall in 2012 and is anchored by New Look, Argos, Tim Hortons and Post Office. Four of Queens Arcade’s stores – Argos, Christopher George, F. Hinds and Whittard of Chelsea – have been in the centre from its launch and others from the opening year line up have changed their company names – such as Cookie Jar now Millie’s Cookies and Partners now Ryman.

The original architecture was inspired by the many late 19th century arcades of Cardiff city centre and has appeared as the backdrop for various TV programmes, including the 2005 Doctor Who story "Rose", starring Christopher Eccleston and Billie Piper, which was set in London.
Image by shining.darkness on Flickr under Creative Commons License.
Sight description based on wikipedia
5

Cardiff Market, also known as Cardiff Central Market, is a Victorian indoor market in the Cardiff city center, the capital city of Wales. The market was designed by the Borough Surveyor, William Harpur, and opened in May 1891. A farmers' market is known to have existed at the site since the 1700s. The market consists of two shopping levels, a ground floor and a balcony level which wraps around the exterior market walls on the interior. Entrances to the market are located at St. Mary Street, Trinity Street and from an alleyway off Church Street. There is a large H. Samuel clock above the High Street entrance, which was presumably donated by the H. Samuel jewellery chain, which once had a store just outside the High Street entrance. Traders in the market offer a variety of fresh produce, cooked food, various delicacies and more durable goods.
Image by Allie_Caulfield on Flickr under Creative Commons License.
Sight description based on wikipedia
6

The Morgan Arcade started in 1896 and it was built to connect the main entrance of David Morgan's department store on St Mary's Street, with his other store on The Hayes. It opened in 1899 as the New Central Arcade, running east/west from the Hayes to St. Mary's Street.

After Morgans bought the Royal Arcade, the family formed a holding company called the Cardiff Arcade Company, which owned and operated both the Royal and renamed Morgan arcades, which both ran underneath the store.

After the agreed closure of David Morgan's, the property assets inside the various holdings companies were sold in late 2004 for £25 million to property firm Helical Bar. David Morgan Limited, Deymel Investments Limited and the Cardiff Arcade Company Limited are now all in liquidation.

Between 2007 and 2008 the whole site was refurbished by Helical Bar, with the arcades restored. The companies spent £30M on restoring both the Morgan and Royal arcades, with some first-floor Venetian windows and original wooden storefronts still surviving. The Morgan Arcade is now described as the best preserved of Cardiff's arcades.
Image by Robin Drayton on Wikimedia under Creative Commons License.
Sight description based on wikipedia
7

The Royal Arcade is the oldest arcade in Cardiff, being built in 1858, it is a Grade II listed building. In 1861, a free library was set up by voluntary subscription above the St Mary Street entrance to the Royal Arcade in Cardiff. Before the end of the 19th century the Cardiff School of art was using rooms above the arcade with students such as J. M. Staniforth and Goscombe John attending. Running east/west from The Hayes to St Mary's Street, parallel but to the south of the Morgan Arcade, it also runs under David Morgan's department store. After Morgans bought the Royal Arcade, the family formed a holding company called the Cardiff Arcade Company, which owned and operated both the Royal and the Morgan arcades.

Between 2007 and 2008 the whole site was refurbished by Helical Bar, with the arcades restored. The companies spent £30M on restoring both the Morgan and Royal arcades, with some first-floor Venetian windows and original wooden storefronts still surviving.

Today the Royal Arcade still has some of the original shopfronts at numbers 29, 30 and 32 on St. Mary Street. Running direct opposite from the new St. David's 2 development and close to Cardiff Central Library, a variety of independent shops are still to be found such as Wally's Delicatessen, who have been in the arcade for 60 years, and those specialising in Welsh textiles, gifts and homeware.
Image by Colin Smith on Wikimedia under Creative Commons License.
Sight description based on wikipedia
8

Wyndham Arcade is a Grade II Listed building. It opened in 1887 and has entrances on St. Mary Street and Mill Lane, running parallel to Cardiff's Café Quarter. This Edwardian arcade is home to several restaurants including ASK.
Image by Jon Candy on Flickr under Creative Commons License.
Sight description based on wikipedia