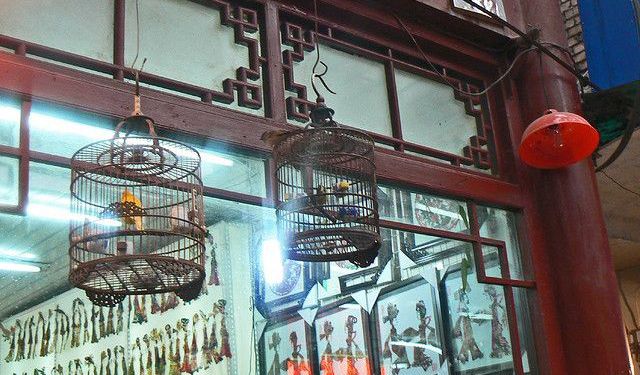 Xian is an amazing city where you can do some quality shopping, especially if you crave for some authentic Chinese souvenirs. The ideal choice for you is to explore the streets of Xian, because that's where the souvenirs are cheaper. We invite you to take this walking tour and go for a stroll along the shopping areas of Xian.
How it works: Download the app "GPSmyCity: Walks in 1K+ Cities" from iTunes App Store or Google Play to your mobile phone or tablet. The app turns your mobile device into a personal tour guide and its built-in GPS navigation functions guide you from one tour stop to next. The app works offline, so no data plan is needed when traveling abroad.

The street leading to the Great Mosque in Xian is the Huajue Xiang Street. It is lined with shops selling souvenirs for tourists to take home. Unlike the antique markets of Xian where serious collectors look for authentic objects, this street sells replicas and other souvenirs.

The Huajue Xiang Street has been part of the city of Xian for over a thousand years. It was established during the reign of the Tang Dynasty. At the time it was a small street called Ziwu Xiang. The street has an irregular shape and first runs from east to west and suddenly runs north. There is a traditional Chinese gateway at the entrance of the market. The narrow street flanked by shops stretches all the way to the Great Mosques. Most of the sellers in the souvenir street are Hui people who follow the Muslim faith.

The stores on Huajue Xiang Street sell replicas of all types of traditional Chinese objects. Visitors are encouraged to bargain and are sure to get replicas of an array of objects like jade artifacts and Ming vases at cheap prices. Besides replicas, the stores sell luggage, shoes, jewelry, clothes fans, watches and replicas of terracotta army figure similar to those at the terra cotta museum.

Image by watchsmart on Flickr under Creative Commons License.
2

The street from the Drum Tower to Beiyuan Gate in Xian is referred to as the Muslim Street. It is a shopping street with shops selling products and cafes serving dishes with an Islamic flavor.

Huimin Jie is popularly called Muslim Street in Jian. It is the area where the Hui people who follow the Islamic faith live. It is 500 meters long and paved with black stones. The buildings that flank the street retain the old architecture of the Ming and Quing Dynasties. The area has ten mosques of different sizes including China’s earliest Great Mosque. The Hui people have preserved their traditions, cuisine and culture for thousands of years. They came to China from West Asia through the silk route from India. The street offers a unique atmosphere compared to other parts of the city and adds to the cultural diversity of Xian.

The Muslim Street is frequented by locals for the many delicacies served in the restaurants. Well known dishes include Yang Rou Pao Mo or Bread soaked in mutton stew, pickled vegetables and sliced beef stirred with rice and Xiao Su Rou or Small Crisp Mutton. This dish consists of mutton wrapped in starch and steamed. Black plum juice is served to visitors to wash down the rich food served by the restaurants in Muslim Street.

Image by Don-kun on Wikimedia under Creative Commons License.
3

The Shu Yuan Men Street also called the Arts Street or the Calligraphy Street has shops dating back to over 400 years. They sell Chinese arts, crafts, calligraphy and traditional Chinese paintings.

The Shu Yuan Men Street is a small crowded street located behind the Forest of Steles Museum in Xian. The entrance is through an ancient gate called the South Gate. The street gets its name from the Guanzhong Shuyuan which was once a school for classical learning. Today, the Xian normal School and a primary school are located on the site of the old Guanzhong Shuyuan. The shops retain the old facades of buildings from the Ming and Qing Dynasties.

The Shu Yuan Men Street has stores selling traditional hand crafted objects. Oriental paintings of different styles are also available at the market. Visitors looking for genuine calligraphy scrolls can buy them at the many stores located here. They also sell calligraphy brushes, inks and other accessories for serious calligraphists. One can also buy jade articles, jewelry, antiques and folk artifacts at the market. The old Muslim Quarter at the northern end of the street has a gallery of traditional Chinese paintings. The gallery is housed in an old Ming style building with a courtyard where artists still produce traditional Chinese paintings.
Image by Vera Tuz under Creative Commons License.
4

4) Painting and Calligraphy Street (must see)

The Painting and Calligraphy street is located behind the Beilin/ Stele of Stone Museum. This street is a place where you can find the perfect Chinese painting depicting a landscape, a flower or a bird. Also, you can get all kinds of calligraphy. The dealers are pleasant and honest people who are willing to spend time to choose a suitable item for you to buy.
Image by Kent Wang on Flickr under Creative Commons License.
5

The Ba Xian Temple or Eight Immortal Temple is the largest Taoist temple in Xian and one of the most important in Northwest China. The street leading to the temple is flanked by stores selling an array of antiques and artifacts.

The Ba Xian Temple covers an area of 73,000 square meters. It has five halls in the entrance dedicated to the Taoist Protector Deity, Wang Lingguan. The next section has two halls. The hall at the back has painted figures of the eight immortals, Han Zhongli, Zhang Guolao, Han Xiangzi, Tieguai Li, Cao Guojiu, Lv Dongbin, Lan Caihe and He Xiangu who are regarded as guardian angels. The third section has the main hall where sacrifices were made to important Taoist deities. Taoist monks still reside in the nearby monastery and perform rituals here even today.

The antique market in the street outside the Eight Immortals Temple is about 100 meters long and is lined with shops selling religious Taoist figures, antiques, curios and Kwan-yin statues. Some hawkers sell their ware on mats spread on the ground. Ancient two storied buildings located outside the temple also form part of the market and house antique stores selling copper mirrors, folding screens, vases and fans.
Image by lydiadehn on Flickr under Creative Commons License.

Parks and Squares Walk in Xian

Xian is a historical city or as locals say a city of the past. Though it is considered to be rather small, it is perfectly formed. All the main sights are located in the center, surrounded by a circle of small squares with landmarks and beautiful lakes. Though they do not represent must-see spots, we think you will enjoy this walking tour through Xian's amazing gardens.

Places of Worship in Xian Tour

Xian looks like a melting pot of different cultures and religions in Asia. If you visit the places of worship in this city you will realize this. Here you can admire pagodas, temples (holy places for Buddhists) and mosques (place of worship for the followers of Islam). If you like exploring other religions you will enjoy taking this self-guided tour.