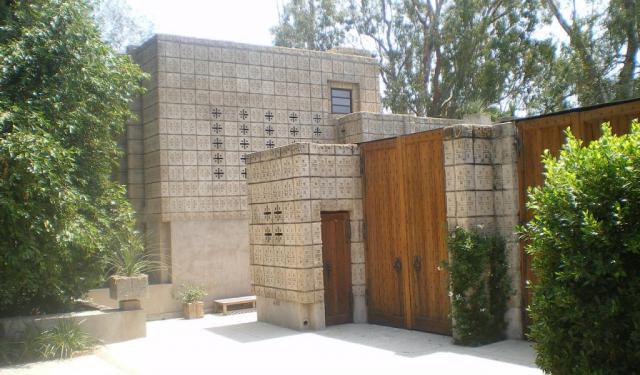 Image by dizzymissytrolly on Flickr under Creative Commons License.

Like many other cities in the United States and in the world, Pasadena has a variety of architectural styles and building designs. Well known architects and designers created a paramount work which we can enjoy today. Spend a few hours touring the amazing masterpieces this beautiful city is ready to show you.
How it works: Download the app "GPSmyCity: Walks in 1K+ Cities" from iTunes App Store or Google Play to your mobile phone or tablet. The app turns your mobile device into a personal tour guide and its built-in GPS navigation functions guide you from one tour stop to next. The app works offline, so no data plan is needed when traveling abroad.

The blocks of the house were created in wooden molds with patterns on the outside and smooth on the inside. The blocks feature a symmetrical pattern of a cross with a square in each corner. Wright reinforced the blocks using conventional mortar. The project cost $17,000 — 70% more than the $10,000 budget Millard had given to Wright. Some accounts state that the builder walked off the job, "leaving Wright to finish the project himself, out of his own pocket."

The 2,400-square-foot (220 m2) house consists of a vertical three-story block. The first floor has the kitchen, servant's room and a dining room opening onto a terrace with a reflecting pool. The second floor has the main entrance, guest room, and a two-story living room with a fireplace and balcony. The third floor contained Millard's bedroom with a balcony overlooking the living room and outdoor terrace.

Image by Los Angeles on Wikimedia under Creative Commons License.
Sight description based on wikipedia
2

Originally intended as a winter residence for David and Mary Gamble, the three-story Gamble House is commonly described as America's Arts and Crafts masterpiece. Its style shows influence from traditional Japanese aesthetics and a certain California spaciousness born of available land and a permissive climate. Rooms in the Gamble House were built using multiple kinds of wood; the teak, maple, oak, Port Orford cedar, and mahogany surfaces are placed in sequences to bring out contrasts of color, tone and grain. The sensuous woods, the generously low and horizontal room shapes, and the quality of natural light that filters through the art glass exterior windows, coexist with a relativelytraditional plan, in which most rooms are regularly shaped and organized around a central hall. The overall landscape design and constructed garden elements are integrated with the architectural proportion and detailing. The triple front door and transom feature a Japanese black pine motif in plated (more than one layer) leaded art glass. This was done on purpose to highlight the Asian influence that runs throughout the house.

The Colorado Street Bridge was designed and built in 1913 by the firm of J.A.L. Waddell, based in Kansas City, Missouri. The structure carries Colorado Boulevard (then called "Colorado Street"), the major east-west thoroughfare connecting Pasadena with Eagle Rock and Glendale to the west, and in Monrovia to the East. It spans 1,486 feet (453 m) and is notable for its distinctive Beaux Arts arches, light standards, and railings. The bridge is on the National Register of Historic Places and has been designated a National Historic Civil Engineering Landmark by the American Society of Civil Engineers.

During the early years of the twentieth century, the Colorado Street Bridge was known locally as "Suicide Bridge" after dozens of suicides. A suicide barrier was added which reduced the number of suicides, but the bridge retained its nickname. In 1989, after the Loma Prieta earthquake in Northern California, the bridge was declared a seismic hazard and closed to traffic. It was reopened in 1993 after a substantial retrofit. The bridge is closed each summer for a festival, "A Celebration on the Colorado Street Bridge", hosted by historic preservation group Pasadena Heritage.

4) US Court of Appeals

The Richard H. Chambers U.S. Court of Appeals is a historic resort known as the Vista del Arroyo Hotel and Bungalows founded in 1920. It is the largest of several buildings adjacent to a residential district at the western edge of Pasadena. The sections of this building were designed in the Spanish Colonial Revival style with a skillful interplay of stucco walls, arched openings and terracotta tile roof. The exterior ornamental detailing is very simple, with bracketed balconies, an arcaded ground level and Spanish Colonial Revival features such as circular windows and twisted balusters. The most prominent component of the building, the 1930 tower, is richly embellished and capped with a dome covered with patterned dual-toned tiles. The present architecture is the result of the work done during 1920-1937 by such famous architects as Marston, Garrett Van Pelt, Myron Hunt and George H. Wiemeyer.
Image by General Services Administration on Wikimedia under Creative Commons License.
Sight description based on wikipedia
5

5) Tournament of Roses Association (must see)

Tournament of Roses Association, created by the efforts of Charles Frederick Holder and Francis F. Rowland, is the non-profit organization that has annually produced the New Year's Day Tournament of Roses Parade since 1895 and the Rose Bowl Game, since 1902. The building of the organization is located on South Orange Grove Boulevard.

The structure, a stately Italian Renaissance-style mansion, was once owned by William Wrigley Jr., the chewing gum magnate. After Mrs. Wrigley's death in 1958, the property was presented to the City of Pasadena with the condition that the house become the permanent base of operations for the Tournament of Roses. The house was built for real estate and dry goods tycoon George Stimson, designed by his architect son G. Lawrence Stimson. After construction was completed of this house on "Millionaires' Row" in 1914, Mr. Stimson sold it to the Wrigleys for $170,000. A year later, the adjacent gardens were bought for $25,000.

Today, the five bedrooms of the second floor are used for committee meetings, as well as serving as a dressing area for the Royal Court and space for display of the Tournament of Roses history. There are displays of trophies, past Rose Bowl Games, Grand Marshals, Presidents, and Queens and Courts.

The Norton Simon Museum collections include: European paintings, sculptures, and tapestries; Asian sculptures, paintings, and woodblock prints; and Sculpture gardens displaying many sculptors' work in a landscape setting around a large pond. The Museum contains the Norton Simon Theater which shows film programs daily, and hosts; lectures, symposia, and dance and musical performances the year-round. The museum is located along the route of the Tournament of Roses's Rose Parade, where its distinctive, brown tile-exterior can be seen in the background on television.

The Norton Simon Museum, which comprises more than 11,000 objects, contains a significant permanent collection which is highly regarded internationally. Most of the art is on long-term loan from The Norton Simon Foundation and the Norton Simon Art Foundation. No more than 800 or 900 of those pieces are on display at any one time. The Museum also mounts temporary exhibitions that focus on a particular artist, an art movement or artistic period, or art that was created in a specific region or country.

For more than three decades after it was founded in 1975, the Norton Simon Museum maintained a no-loans policy. In 2007 the board agreed to circulate select works to museums including the National Gallery in Washington, saying it wanted the museum to become better known.

Ambassador Auditorium is located on the historic Ambassador College campus (the Ambassador Auditorium is currently owned by HRock Church continues as a special events venue as well as home to many of Pasadena's symphonies). It was built under the guidance of Herbert W. Armstrong as both a facility to be used by the Worldwide Church of God for religious services and as a concert hall for public performances celebrating the performing arts. Its architectural design has been noted to be somewhat similar to that of the Temple of ancient Israel.

Called by some concertgoers "The Carnegie Hall of the West", this relatively small yet beautiful concert hall hosted 20 seasons of the worlds' best musicians and performers from 1974 to 1995. At the time of its construction the building was furnished with Iranian onyx, African teak, wool carpet from India, and splendid gold overlay.

Places of Worship Tour in Pasadena

Pasadena can be called the city of churches. The buildings are designed in various styles and thus give a distinctive characteristic feature to the city. Here you can find almost any type of religion, confession and sanctuary. Follow this guide and visit these sacred places and you will be delighted and excited by their beauty.

Pasadena has many interesting places for a sweet childhood. The city has a lot of desert specialized shops, rich kids’ cloth boutiques and last but not least, groovy parks and playgrounds. This fascinating guide will take you and your children into an exciting wonderland.

Pasadena is a city rich in cultural venues, monuments, museums and churches. The downtown is a green area with many great places of national and international importance. Don't hesitate to spend a few hours touring this part of the city.

Night life in Pasadena is rich and diverse. If you are a sports fan, you can watch a match with your friends and have some cold beer in a pub. There are places where you can dance all night long. Or you can choose a quiet location to go for a date. Follow this colorful night trip and you will discover places where you could spend unforgettable moments.

Museum and Galleries Tour in Pasadena