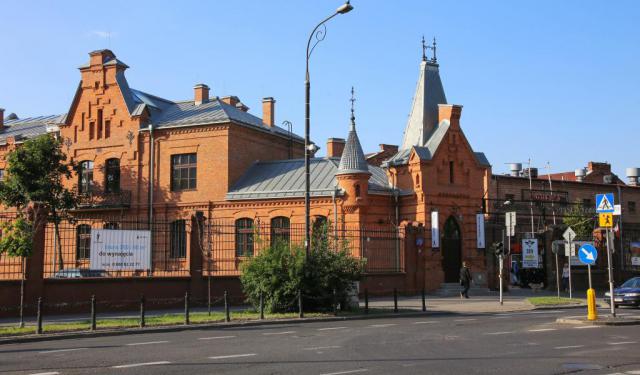 Praga is an old district in Warsaw, situated on the East bank of the river Vistula. The area used to be off-limits to Western travelers due to its high crime rate. But in recent year, the district has been transformed into a hipster neighborhood due to the influx of investment and students and artists who were drawn by the area's affordable living. Take this self-guided walking tour to visit the top attractions in Warsaw’s newest trendy neighborhood.
Image Courtesy of Flickr and Paul Sableman.
How it works: Download the app "GPSmyCity: Walks in 1K+ Cities" from iTunes App Store or Google Play to your mobile phone or tablet. The app turns your mobile device into a personal tour guide and its built-in GPS navigation functions guide you from one tour stop to next. The app works offline, so no data plan is needed when traveling abroad.

St. Florian's Cathedral is known for its imposing 75-meter high towers that dominates Warsaw's Praga district. The church was constructed as much to meet pastoral needs as for responding to Russian domination over Poland. Building this church was more of an act of defiance and protest.

After the Congress of Vienna in 1815, Warsaw was placed under the control of the Russian Empire and Russia started exercising its influence over the local population. Among other things, over twenty Russian Orthodox churches were built in Poland, including the Cathedral of St. Mary Magdalene opened in 1869 on the same street.

As a direct response to the opening of Cathedral of St. Mary Magdalene, locals started building St Florian’s in 1897 and it was opened 1904. The church is named after St. Florian, the patron saint of professions associated with fire, such as firefighters, steelworkers, chimney sweeps, potters and bakers.

During and after the Siege of Warsaw, churches were used as a hiding place for Jews, the Warsaw Army (Armia Warszawa) and as a general refuge for civilians. Before Nazis left withdraw from Poland in 1944, they blew up this church. The church remained in ruins for several years until a reconstruction effort started in 1950s.

The reconstruction used the 19th Century bricks that made the church look very authentic. The rebuilt church opened in 1972. Today this church is referred to as the Praga’s Cathedral.

Across street from St. Florian's Cathedral is the Praga Park which is also known as the Soldiers of the Polish First Army Park. The park was the burial ground of some Polish army soldiers die during the World War II.

The park was established in 1865 and a zoo was added to the park ground in 1927. The zoo was initially founded to house the native animals of Poland such as storks, brown bears and otters. Today the zoo houses over 4,200 animals, representing more than 500 species.

The park offers many benches, a big statue of giraffe, and lots of trees. It is a nice, green, and pleasant place to spent time and relax.
Image Courtesy of Wikimedia and Hiuppo.
3

After Warsaw was placed under the control of the Russian Empire as part of the Congress of Vienna in 1815, Warsaw saw a large influx of Russian immigrants who practiced Orthodox. By mid-1800, Orthodox made up roughly ten percent of the population in Praga.

Cathedral of St. Mary Magdalene was constructed especially to serve the Russian immigrants in Praga and the soldiers of the two Russian garrisons located in the area. The foundation stone of the church was laid in 1867 and it was completed in 1869.

The building was covered with a hipped roof with five onion-domes. The interior was beautifully decorated and a group of 27 murals were painted on the inside walls.

After Poland regained its independence in 1920, most Orthodox churches were demolished or transferred to other religions. Miraculously, St. Mary Magdalenes survived. During the World War II, the church suffered only minor damages, so today you still see original interior decorations including the main iconostasis and the gilded altars.

In 1944, Nazis confiscated the church bells for the purpose of making missiles, but only to discover that the bells were not suitable for melting down. The broken bells were later welded back together and can be found near the building entrance today.

Visit this church to enjoy its beautiful architecture and exquisitely decorated interiors.
Image Courtesy of Wikimedia and A.Savin.
4

Monument of Praga's Backyard Orchestra appeared in 2006, and it represents a local musical group from the times when such musicians traveled the courtyards of the city, especially in the Praga region. They often played regional and popular Warsaw music. The band consists of an accordion player, violinist, guitarist, drummer, and a banjo player.

The monument quickly became a local landmark, a popular tourist attraction and a favorite Instagram spot.
Image Courtesy of Wikimedia and Hiuppo.
5

The need to create the Prague Museum and to preserve its vanishing memorabilia has long been discussed. There were different ideas for the final location of the museum. Ultimately, it was decided that the museum would be located in a complex of three historic tenement houses next to the Różycki Bazaar. One of them - the Krzyżanowski's House (Rothblith house) - is the oldest surviving brick residential house in Praga.

Three tenement houses were connected, but different floor levels were kept. They include, among others museum exhibitions, a room for interactive education and oral history and a cafe. The museum also includes a house of prayer and a new building with a projection room. The museum with a permanent exhibition was opened to visitors in 2015.

The Praga Museum of Warsaw organizes exhibitions with free guided tours on selected dates, workshops for children, walks around the district, cultural reviews and theater performances, festivals (including a crafts festival with a craft products fair) and conferences.
Image Courtesy of Wikimedia and Adrian Grycuk.
6

Rozycki Market is believed to the oldest outdoor market in Warsaw with its root tracing back to mid-17th century. Today it is a public market serving the daily needs of residents living in the neighborhood.

Although much of the functions of a public market has been taken over by malls and supermarkets, Rozycki Market is still an institution in Praga. Here you can find clothes, shoes, hats, toys, kitchen wares, table sets as well as fruits, vegetables, meat, etc., pretty much everything you need for day-to-day living.

It is an interesting place to see how locals do their daily shopping.
Image Courtesy of Wikimedia and Adrian Grycuk.
7

Located in the Praga district, Zabkowska Street is one of the oldest streets in Warsaw. It runs east from Targowa Street and is about one kilometre long. Considered one of the most interesting tourist destinations, it is famous for historical tenement houses that were built at the turn of the 20th century.

Before the First World War Zabkowska Street was inhabited mainly by Jewish people. In most cases, they were real estate owners, traders, and entrepreneurs as they belonged to higher levels of the middle class of society.

Zabkowska Street was a place of entertainment from the very beginning. At Rozyckiego Market, which lies in the heart of the street, everyday hundreds of people exchanged services and spent time together in a friendly, lazy, Warsaw-style atmosphere. Zabkowska Street was also famous for Vodka Factory where top quality alcohol was produced.

Today Zabkowska Street is a busy place with many restaurants and bars. In most of them, one can try Polish and Czech cuisine at a lower price compared to at Warsaw's city center. Zabkowska Street is a student, tourist and hipster friendly place. It has become an artist hub, where many musicians and painters stay here looking for inspiration.
Image Courtesy of Wikimedia and Kgbo.
8

Warsaw Vodka Factory is a factory complex of neo-Gothic buildings from the late nineteenth century located in Praga.

The factory is a peculiar example of European industrial architecture from the late 19th and early twentieth century. The red-brick buildings represent the Gothic style – narrow windows, characteristic of that age cornices, perpendicular towers and rib-vault ceilings. The main gate from the Zabkowska street is quite beautiful. Many buildings in the complex survived the Second World War.

Today the old vodka factory has been transformed into a museum. Visitors can see the old production process of making vodka as well as marvel the beautiful historical architecture. Guided tours are available as well as vodka tasting. There is also a gift shop on site.
Image Courtesy of Wikimedia and Kgbo.
Sight description based on Wikipedia.