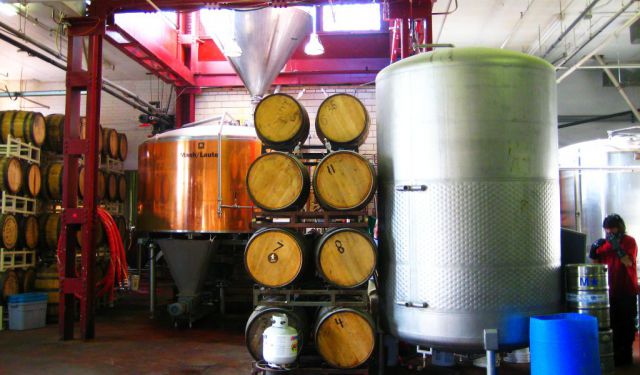 Denver, known as the "Napa Valley of Beer" is a great location for a microbrew walking tour! More beer is brewed in Denver than any other city in the country. Denver ranks first in the nation in beer production per capita and second in the number of breweries. In fact, it has 74 breweries within 100 miles of downtown, and is home to the annual Great American Beer Festival.
This article is featured in the app "GPSmyCity: Walks in 1K+ Cities" on iTunes App Store and Google Play. You can download the app to your mobile device to read the article offline and create a self-guided walking tour to visit the attractions featured in this article. The app turns your mobile device into a personal tour guide and it works offline, so no data plan is needed when traveling abroad.

The Flying Dog Brewery opened its doors in Aspen in 1990. Co-founders George Stranahan and Richard McIntyre decided, after a trip to the Himalayas and night at a Pakistani Hotel, that Flying Dog should be born. The spotting of an actual flying dog in the hotel bar gave them the idea. All their artwork was inspired by long-time friend Hunter S. Thompson. The brewery in Aspen soon exceeded capacity and had to move locations to a 50-barrel facility in Denver in ‘94. The ales were distributed to more than 45 states, and “The Best Pale Ale in America” award at the Great American Beer Festival went to their famous “Doggie Style.” To accommodate supply and demand, the brewery moved once again to Maryland in ’08. The tasting room is what remains, with it’s eccentric artwork and oddly named beers. By now, I’m sure you’ve realized that the room is quite hard to locate – a small office on the first floor of an apartment complex. But once you’re in, you might as well try some of their popular brews. The trend these days amongst microbrews often finds itself combining IPAs with Belgian yeasts -- the legendary Raging Bitch is a good example of this. The boorish name proceeds itself, and Flying Dog is still fighting battles to get it distributed in some states. The tasting room has limited hours, and is open from 4 to 6 pm, Thursdays and Fridays.
2

Established in 1994, with almost 17 years of brewing experience, the Great Divide Brewing Company is a must-see on the Microbrew Tour. The brewery is the only establishment of it’s kind to be strictly marketed as a tap room. Without the distraction of food and pesky TVs, connoisseurs and novices alike can collectively experience the true art of craft beer tasting. President and brewhouse founder Brian Dunn, set off to bring his experience as a homebrewer to the Denver area. Having traveled extensively in Europe, he recognized the need of a microbrew scene in Colorado. Three months after its opening in 1994, the Great Divide Brewing Company won the first of the brewery’s twelve Great American Beer Festival and four World Beer Cup awards. Dunn steered the company from producing 17 barrels per year to its current production of over 19,000 barrels annually. The brewery offers a wide array of options, from sweet and subtle to exceptionally hoppy and aggressive. For the ladies, try the Hades - a Belgium style golden ale with a sweet taste and a smooth finish. For the gentlemen, you can’t go wrong with the Hercules Double IPA. This aggressive beer contains large amounts of hops, with a nutty and malty taste. Tours run Monday through Friday, at 3 and 4 pm. The tasting room is open daily at 2 pm.
3

The Breckenridge Brewery and Pub opened its doors in 1992 as one of Denver’s first brewpubs. The original brewery can be found in the mountain town of Breckenridge, and was established in 1990 by Richard Squire – who dreamt of skiing all day and drinking great beer every night. There are always eleven beers on tap, and a steady rotation of seasonal styles. What has grown from a small operation of only 3,000-barrels-a-year has blowup to a production of nearly 30,000 barrels distributed across Colorado and to 32 states. As you will notice, the Ballpark Pub no longer brews beer. They had to recently move locations to accommodate supply and demand. However, you can sample an array of original creations and popular styles. For the ladies, try the Agave Wheat – a light and simple beer with natural agave nectar. For the men, try the 471 IPA – a double IPA full of hops. If you have time, take a drive to the brewing and bottling facility located at 471 Kalamath Street. It’s open Monday through Saturday at 11 am, and includes a tasting room and BBQ.
4

The Sandlot is attached to Coors Field, home of the Colorado Rockies, and is unfortunately only open on game days. Blue Moon was originally established at The Sandlot back in 1995, with the intent to create a uniquely-flavored, and highly drinkable handcrafted beer. The famous Belgian-White has taken home three world Beer Championship medals, including the gold in ‘95, and the silver in ‘96 and ‘97. Inside The Sandlot, you can find delicious micro brews, food, and a full bar. Some other popular styles include the Fresh Track Ale and the Mary Jane Ale. Blue Moon Brewing Company is a subsidiary of Molson Coors. The famous Coors Brewing Company was established back in 1873 by German immigrant Adolph Coors and Denver businessman Jacob Schueler. The company now exceeds an annual production of 19 million barrels and was the first brewery to win the Environmental Protection Agency’s first-ever environmental control award for corporations. Make the drive to the brewery in nearby Golden and visit the largest single brewery facility in the world. As for The Sandlot, we recommend getting there as soon as the gates open to avoid bumping shoulders with the baseball fanatics.
5

While the Falling Rock Tap House is not an actual brewery, it is a spot of this tour that cannot be missed. The establishment has an impressive selection of 88 beers on tap, all of which are microbrews or imports. In addition, they have 130 different bottled beers and the list is updated on a regular basis. As their motto goes, “No Crap on Tap,” lives up to the legend. Falling Rock has one of the best selections of beer in Colorado and to sample them all would be a beer-tasters challenge, so we urge you to try at least a handful. The tap house was awarded Denver Westword's 'Best Beer List' seven times between the years 2001 and 2008. Hours of operation are 11 am to 2 am, seven days-a-week.
6

Established in 1994, the Chophouse and Brewery is a traditional vintage steak house with a 1940s charm. This upscale brewpub has 9-10 beers on tap, and 1-2 seasonals. The current trend in micro brewing focuses largely on bold hops, but at the Chophouse, they are known for their lagers taken from the European style. This brewery definitely has a variety of under rated beers. You can get a five ounce sample of every beer for only $15. The building that calls the Chophouse home, was once an old Rail yard, thus giving the logo its’ current features. When the owners bought the building, a large number of homeless people were living in the structure. They were obviously displaced, so now, every Thanksgiving, the brewpub cooks a massive meal for them. The Chophouse and Brewery is a subsidiary of the Walnut Brewery found in Boulder – a short day trip if you have the time.
7

The Wynkoop Brewing Company is Colorado’s first brewpub. It was established in 1988 by a group of beer pioneers, including current Denver mayor John Hickenlooper. When the owners first bought the J.S. Brown Mercantile Building, the community was run down and derelict. The opening of the brewpub brought life back to the neighborhood, thus creating one of Denver’s most trendy areas. The building dates back to 1899, when miners and ranchers bought goods to furnish their homes. The brewmasters often have creative control, and are always developing additional styles. Try the B3K Schwarzbier for an introduction towards dark beers. This German-style black lager acts as training wheels for the novices. It won the 2008 Great American Beer Festival Gold Medal for its category. A notable feature of the Wynkoop Brewing Company is their dedication to serving cask conditioned beer and preserving the heritage. Traditionally a British method, cask conditioned beer can remind us of the days when beer was served slightly warmer with gentler carbonation. The traditional serving method brings out fine aromas, and create a soft, billowy head. This process is often referred to as “real ale” because it is unfiltered, unpasteurized and still contains live yeast. Check out the London Calling IPA for a sample of this style. Tours are available on Saturdays from 1-5 pm, or by appointment.
Image by Jeffrey Beall under Creative Commons License.
8

While Rock Bottom Breweries can be found in locations across several states, the very first Rock Bottom opened its doors right here in Denver in 1991. The brewery was awarded the 'Large Brewpub and Large Brewpub Brewer of the Year' at the 2008 Great American Beer Festival. Rock Bottom is a classic brewpub atmosphere found in the heart of downtown Denver on 16th Street. They pride themselves in offering a broad range of unique ales and lagers handcrafted and brewed on-site. While Rock Bottom is infamous for being a chain, each location gives their brewmasters creative control. They tailor each brewery’s beer selection to fit the tastes and needs of the local population. Brewmaster John McClure is most noteable for his ‘Molly’s Titanic Brown Ale’ that won a Gold Medal in the 2006 Great American Beer Festival. The establishment opens at 11 am, seven days per week. To get to the next stop on this tour in a jiffy, hop on the free shuttle bus located on 16th street. It will transport you most of the way, then you can walk the remainder over to Pint's Pub Brewery.
9

Pint’s Pub is your traditional British Brewpub, adorned with British flags and memorabilia, including a customary London phone booth out front. Established in 1993, the Pint’s Pub made this 100-year-old building it’s home to give you an authentic feel. This brewpub is know for two things – traditional cask conditioned or live ales, and the largest selection of single malt whisky outside of the United Kingdom. Both are noteable features, and a rarity in the U.S. Because cask conditioned beer isn’t filtered and pasteurized like in other breweries, the beer undertakes a secondary fermentation in its container to give you a distinct taste. The pub opens at 11 am, seven days per week.
10

Founded by Paul and Nancy Lumbye in 2010, the Uptown Brothers Brewing Company is one of Denver's newest editions to the microbrew scene. It offers a “friendly neighborhood vibe in a craft beer joint” and combines the essential ingredients of a neighborhood, sports, and microbrew bar. Paul’s love of brewing led him to fulfill his dream of opening a brewery. He had already been a home brewer for 10 years, and a bar-goer for 40. With over 32 beers on tap (30 of which are micros and craft), and 75 different bottles, the Uptown Brothers Brewing Company is making its mark amongst the community. In the Summer of 2011, Uptown will start brewing its’ own creations starting with a one-barrel system, producing between two and four kegs per week. If you want to see what breweries look like in their infant stages, Uptown is a great place to check out.