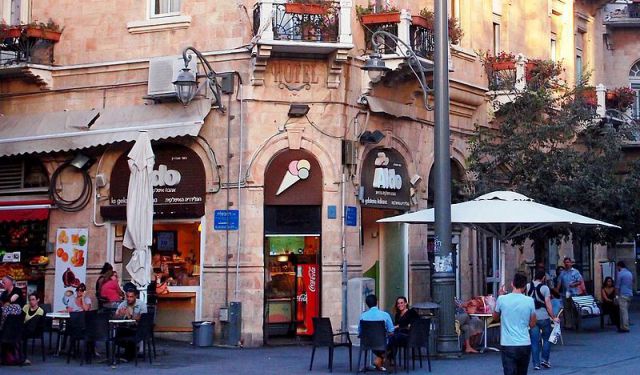 Image by VnGrijl on Wikimedia under Creative Commons License.

Shopping in Jerusalem is an exciting affair. The entire center of the city is one large pedestrianized mall and includes a number of famous and popular streets, including King George Street, Hillel Street and Ben Yehuda Street. From jewelry, traditional and casual clothing to souvenirs and the latest fashions, the range of goods is as extensive as it is diverse.

Stroll along Ben Yehuda Street, which has been closed to vehicular traffic for several years. It is both the geographical and vibrant heart of the city center. Along with Jaffa Road and King George Street it forms the Downtown Triangle. Here you can purchase t-shirts, gifts and Judaica and Christian souvenirs while being entertained by numerous buskers, who often play all day long. You will also probably see a variety of other types of street performers. Among the popular Israeli retail outlets in this part of Jerusalem are Teva-Naot leather shoes and Ahava, which sells Dead Sea beauty products.

In addition to all the fabulous shops, Ben Yehuda Street boasts pleasant sidewalk cafés and restaurants. Stop for some refreshing ice cream and a drink and try a falafel. If shopping is not your thing, it is still well worth coming to the area to sample its lively and colorful ambience.
How it works: A discovery walk features a route using which you can explore a popular city neighborhood on your own. This walk, along with other self-guided walks in over 1,000 cities, can be found on the app "GPSmyCity: Walks in 1K+ Cities" which can be downloaded from iTunes App Store or Google Play to your mobile phone or tablet. The app's built-in GPS navigation functions allow following this walk route with ease. The app works both online and offline, so no data plan is needed when traveling abroad.