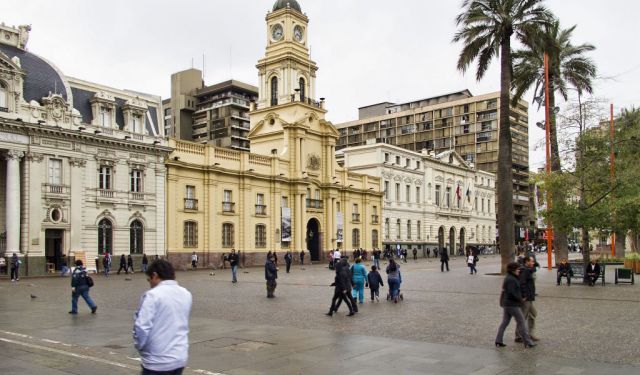 Santiago's beautiful historical center is located right in the downtown area. It is where you will find some of its most important sites of historical interest as well as museums, cultural centers and financial and government buildings.

At the heart of the historical center is the Plaza de Armas, which was laid out in the 16th century. Walk around the vast square and admire the buildings that surround it. They are among the oldest in the city and include the Municipal Building, the Central Post Office and the Metropolitan Cathedral. Building work on this neoclassical place of worship started in 1748 and lasted for a little more than 50 years. Tour the streets leading off the square, upon which so much of the city's history was forged. Visit the church of La Merced, the Municipal Theater and the 17th-century Church of San Francisco.

There is an abundance of shopping opportunities in the area too, such as on Ahumada Street, a pedestrian avenue with four blocks of shops, music stores and restaurants. Huerfanos Street is Santiago's oldest commercial area and features many clothes shops as well as bars, cafés and kiosks selling candies, soft drinks and newspapers.

Go to the Plaza de la Constitución and see impressive ministerial buildings, statues of historic figures and the Centro Cultural de La Moneda.
Image Courtesy of Flickr and Dan Lundberg.
How it works: A discovery walk features a route using which you can explore a popular city neighborhood on your own. This walk, along with other self-guided walks in over 1,000 cities, can be found on the app "GPSmyCity: Walks in 1K+ Cities" which can be downloaded from iTunes App Store or Google Play to your mobile phone or tablet. The app's built-in GPS navigation functions allow following this walk route with ease. The app works both online and offline, so no data plan is needed when traveling abroad.

Image Courtesy of Carlos yo.