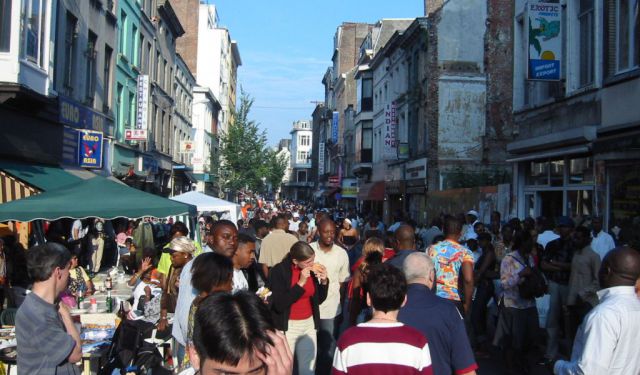 Matonge is the African quarter of Brussels, an energetic, exciting and colorful neighborhood, just a few minutes’ walk away from the European parliament. It is named after an area of Kinshasa, the capital of the Democratic Republic of the Congo and was developed by Congolese migrants in the 1960s and '70s following Congo's independence from Belgium. This exotic community is filled with bars, restaurants, clubs and markets that all beat to an African rhythm.

Walk down St. Boniface Street which is crammed with brasseries and fashionable restaurants. Immerse yourself in African culture at the Kuumba cultural center. Here you can take part in music and dance workshops, browse exhibitions and eat traditional African foods in the café and restaurant. Another good place for some traditional African foods is Rue Longue-Vie and its many restaurants. Savor a plate full of spicy fish marinated in herbs in a Senegalese restaurant, try some Ethiopian fare made with ingredients that come directly from Ethiopia and experiment with a whole host of other African cuisines.

In addition to its African flavor, Matonge is also where you can see some of the city’s historic sights. Visit the Church of Saint-Boniface, the first Neo-Gothic church in Brussels. Stroll along rue Ernest Solvay and admire its beautiful Art Nouveau houses.
Image Courtesy of Flickr and Christopher Soghoian.
How it works: A discovery walk features a route using which you can explore a popular city neighborhood on your own. This walk, along with other self-guided walks in over 1,000 cities, can be found on the app "GPSmyCity: Walks in 1K+ Cities" which can be downloaded from iTunes App Store or Google Play to your mobile phone or tablet. The app's built-in GPS navigation functions allow following this walk route with ease. The app works both online and offline, so no data plan is needed when traveling abroad.