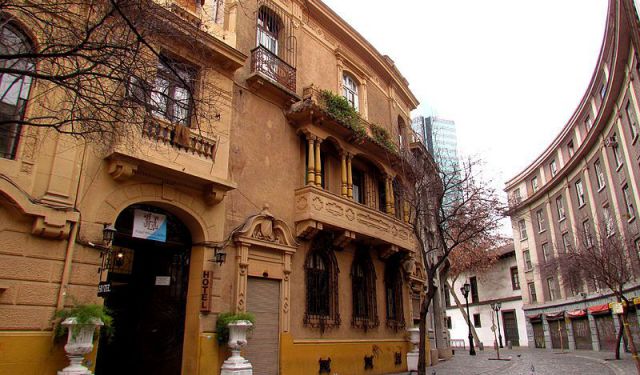 Image by order_242 on Wikimedia under Creative Commons License.

Seek out some tranquil moments away from the hectic and exciting bustle of Santiago, by visiting one of its most tranquil spots. The neighborhood of Paris-Londres dates back to the 16th century and has some of the oldest streets in the city.

It intersects at Calle Londres and Calle París, nestled behind the San Francisco Church, an important place of worship of 17th-century origin. However, the bell tower is from the mid-19th century, because previous towers were destroyed by earthquakes. The area’s narrow and winding lanes are lined by elegant houses, many of which were built in the early part of the 20th century and resemble the mansions that you may see in old London boroughs or the Latin Quarter of Paris.

Along with the small cafés and restaurants, they lend a distinctive European feel to the area. All of this architectural beauty make the area popular with photographers. There are also some sites of historic interest. One of these is 38 London Street which was used as a detention and torture center during the military coup of 1973. Look down at some of the cobblestones on the curbside and you will see plaques dedicated to the memory of those who died in the building. In 1982, Paris- Londres was declared a Zona Tipica to preserve its unique style, charm and character.
How it works: A discovery walk features a route using which you can explore a popular city neighborhood on your own. This walk, along with other self-guided walks in over 1,000 cities, can be found on the app "GPSmyCity: Walks in 1K+ Cities" which can be downloaded from iTunes App Store or Google Play to your mobile phone or tablet. The app's built-in GPS navigation functions allow following this walk route with ease. The app works both online and offline, so no data plan is needed when traveling abroad.